PERTH, Australia (AP) — Prime Minister Scott Morrison was confronted by angry residents who cursed and insulted him Thursday as he visited a wildfire-ravaged corner of the country.

Locals in Cobargo, in New South Wales, yelled at him, made obscene gestures and called him an “idiot” and worse, criticizing him for the lack of equipment to deal with the fires in town. They jeered as his car left. In the New South Wales town of Quaama, a firefighter refused to shake hands with him.

“Every single time this area has a flood or a fire, we get nothing. If we were Sydney, if we were north coast, we would be flooded with donations with urgent emergency relief,” a resident said in Cobargo. 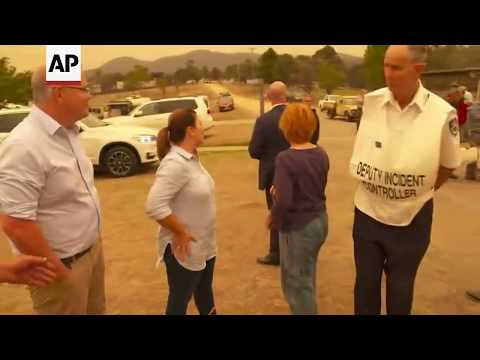 The outpouring of anger came as authorities said 381 homes had been destroyed on the New South Wales southern coast this week. At least eight people have died this week in New South Wales and the neighboring state of Victoria.

More than 200 fires are burning in Australia’s two most-populous states. Blazes have also been burning in Western Australia, South Australia and Tasmania.

“I’m not surprised people are feeling very raw at the moment. And that’s why I came today, to be here, to see it for myself, to offer what comfort I could,” Morrison said, adding, “There is still, you know, some very dangerous days ahead. And we understand that, and that’s why we’re going to do everything we can to ensure they have every support they will need.”

Morrison, who has also been criticized over his climate change policies and accused of putting the economy ahead of the environment, insisted that Australia is “meeting the challenge better than most countries” and “exceeding the targets we set out.”

Cooler weather since Tuesday has aided firefighting and allowed people to replenish supplies, with long lines of cars forming at gas stations and supermarkets. But high temperatures and strong winds are forecast to return on Saturday, and thousands of tourists fled the country’s eastern coast Thursday ahead of worsening conditions.

New South Wales authorities ordered tourists to leave a 250-kilometer (155-mile) zone. State Transport Minister Andrew Constance called it the “largest mass relocation of people out of the region that we’ve ever seen.”

“We don’t take these decisions lightly, but we also want to make sure we’re taking every single precaution to be prepared for what could be a horrible day on Saturday,” Berejiklian said.

The early and devastating start to Australia’s summer wildfires has led authorities to rate this season the worst on record. About 5 million hectares (12.35 million acres) of land have burned, at least 17 people have been killed, and more than 1,400 homes have been destroyed.

The crisis “will continue to go on until we can get some decent rain that can deal with some of the fires that have been burning for many, many months,” the prime minister said.

In Victoria, where 83 homes have burned this week, the military helped thousands of people who fled to the shoreline as a wildfire threatened their homes in the coastal town of Mallacoota. Food, water, fuel and medical expertise were being delivered, and about 500 people were going to be evacuated from the town by a naval ship.

“We think around 3,000 tourists and 1,000 locals are there. Not all of those will want to leave, not all can get on the vessel at one time,” Victoria Premier Daniel Andrews told the Australian Broadcasting Corporation.

Smoke from the wildfires made the air quality in the capital, Canberra, the worst in the world, according to a ranking Thursday.