Moms-to-be teach each other in monthly group prenatal visits

ASHEVILLE, N.C. (AP) — In a big room full of moms-to-be, pregnant women check each other’s blood pressure and weight, a nurse-midwife measures their growing bellies, and they all join a seated circle for two hours of candid talk about what to expect when you’re expecting.

A young woman’s revelation about her strange cravings for glue and fabric softener gets some chuckles, followed by the nurse’s explanation that odd signs like that can signal iron deficiency. It’s the kind of quirky topic that doesn’t always surface in typical 15-minute prenatal checkups, when doctors can seem rushed and patients hesitant to mention those little nagging worries that may seem inconsequential.

But in a more relaxed group setting, women open up and conversation flows beyond vital signs, weight gain and due dates.

“I can tell them it’s normal, but if you have another mom in the group who says, ‘Oh, that happened to me, it’s normal.’ It’s more acceptable, if it comes from a peer,” said Laura Moore, a nurse at the Asheville, North Carolina, clinic.

Pregnant women at the clinic can opt to join a group session for their monthly checkups instead of the traditional one-on-one office visits with their doctor that are usually recommended.

Monthly weekday sessions involve about 10 women, all at the same stage of pregnancy. A nurse or nurse-midwife typically oversees discussions on topics including common pregnancy discomforts, stress management, nutrition and inducing labor. Fathers or other partners are invited to attend and participate. But mothers-to-be take the lead role, teaching by sharing their pregnancy experiences. 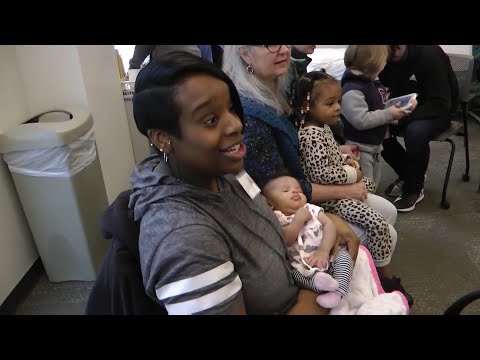 Kailee Morel Alvarez had never heard of group prenatal visits when she learned she was pregnant last summer. But the 21-year-old and her husband were sold after their first visit to Mountain Area Health Education Center’s OB-GYN clinic. Her daughter, Sofia, was born in February.

“Definitely the best part was having other women going through the exact same thing I was, at the same time,” she said.

“At first, I was really worried about if the baby was getting everything she needs, is she growing normally,” Morel Alvarez said. Later on, she was troubled by cramps and early contractions. Learning that other women were experiencing all those things too ”“was super helpful’” she said.

It’s a model the American College of Obstetricians and Gynecologists recently endorsed as a promising option.

“I loved it, honestly,” said Victoria Tate, 28. She had traditional prenatal care for her first two children but decided to try group sessions the third time around. Her son, Deklin, was born Jan. 30.

She said having two hours to discuss health concerns that other women were experiencing, too, was invaluable, and helped make the experience less stressful. For her that included genetic testing, done outside the group, and gestational diabetes, treated by the group nurse.

“I had to change what I was eating, had to test my sugars quite a lot,” she said.

Health insurance typically covers group care. While rising numbers of U.S. centers provide the visits, Jessica Lewis, deputy director of pregnancy research at Yale School of Public Health, said research shows only 3 percent of U.S. women receive group care. Some choose not to, but many aren’t offered it. One reason more health centers don’t have them is the startup costs for staff training and a meeting space.

Lewis co-authored the largest study to date, involving 9,300 women who had group sessions at Vanderbilt University Medical Center in Nashville. Almost six years of data showed women who attended at least five group sessions were 70 percent less likely to have preterm and low-birthweight babies than women who got individual care. The study involved a program Lewis co-founded called Expect with Me.

How group prenatal care might lead to mother-and-child health improvements is unclear. For some women, it’s the first time in their adult lives that they’ve sought medical attention, and Lewis said pregnancy “offers a wonderful window of opportunity, when women are motivated to make a lot of behavior changes. They stop smoking, drinking, they start eating better.”

Group sessions can facilitate those changes and more, which may contribute to improving babies’ outcomes, Lewis said.

Some doctors think benefits may be related to reducing stress. High levels of stress and anxiety during pregnancy, from relationship or financial difficulties, struggles raising other children while working long hours, worrying excessively about labor and delivery — can increase women’s blood pressure and stress hormone levels and have been linked with complications including preterm birth.

The Asheville clinic, which uses a program called Centering, has offered group care since 2013; last year 400 women took part. Yet fewer than one-third of pregnant women offered that option choose it. Lack of on-site child care is one reason. For other women, the idea just seems too foreign, said Amber McCarter, a program outreach specialist.

For Kiana Burgin, the two-hour morning visits made taking time off from her factory job 45 minutes away stressful. She loved the support-group setting but missed the individual, personalized attention she got while pregnant with her daughter, now 5. Her son, Christopher, was born in January and Burgin says she’d probably go back to one-on-one care if she has more children.