ATLANTA (AP) — A second Georgia county has uncovered a trove of votes not previously included in election results, but the additional votes won’t change the overall outcome of the presidential race, the secretary of state’s office said Tuesday.

A memory card that hadn’t been uploaded in Fayette County, just south of Atlanta, was discovered during a hand tally of the votes in the presidential race that stems from part of a legally mandated audit to ensure the new election machines counted the votes accurately, said Gabriel Sterling, a top official in the secretary of state’s office.

The memory card’s 2,755 votes are not enough to flip the lead in the state from Democrat Joe Biden to Republican President Donald Trump. The breakdown of the uncounted ballots was 1,577 for Trump, 1,128 for Biden, 43 for Libertarian Jo Jorgensen and seven write-ins, Sterling said.

Election officials on Monday said Floyd County, in north Georgia, had found more than 2,500 ballots that hadn’t been previously scanned.

Both counties will have to recertify their results, and the margin between Trump and Biden will be about 13,000 votes when those previously uncounted votes are accounted for, Sterling said.

County elections workers have been working on the hand tally since Friday. State law leaves it up to the secretary of state to choose which race to audit. Secretary of State Brad Raffensperger selected the presidential race and said the tight margin meant the audit would require a full hand recount. 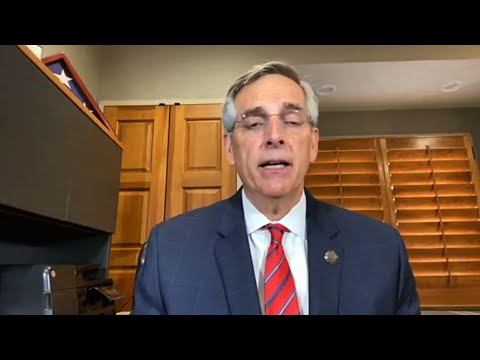 The counties have until 11:59 p.m. Wednesday to complete the hand count. The secretary of state’s office originally said the results of the hand tally would be certified. But Sterling said Tuesday that the state would instead certify the results certified by the counties.

Once the results are certified, if the margin between the candidates remains within 0.5%, the losing campaign can request a recount. That would be done using scanners that read and tally the votes and would be paid for by the state, Raffensperger has said.

State election officials have consistently defended the integrity of Georgia’s vote count and have said the audit is expected to affirm the results. They have conceded that there may be wrongdoing — people who vote twice or people who vote despite not being eligible — and have pledged to investigate any cases.

“We have not seen widespread voter fraud,” Sterling said. “We do know there’s going to be illegal voting, but it’s going to be down in the low hundreds, not in the 12,929 range.”

The Associated Press has not declared a winner in Georgia, where Biden leads Trump by 0.3 percentage points. There is no mandatory recount law in Georgia, but state law provides that option to a trailing candidate if the margin is less than 0.5 percentage points. It is AP’s practice not to call a race that is – or is likely to become – subject to a recount.

Also on Tuesday, Raffensperger announced that a random audit of a sample of Georgia’s new voting machines found no evidence of hacking or tampering.

Raffensperger last week asked Pro V&V, an Alabama-based testing laboratory, to do the audit, his office said in a news release. The company “found no evidence of the machines being tampered.”

“We are glad but not surprised that the audit of the state’s voting machines was an unqualified success,” Raffensperger said in the release.

The new election system the state bought last year from Dominion Voting Systems for more than $100 million includes touchscreen voting machines that print paper ballots that are read and tabulated by scanners.

Pro V&V is a voting system test laboratory that is certified by the U.S. Election Assistance Commission, which sets voluntary guidelines for election management and certification.