Taste of the Tour: Moonlight wine and ‘Beautiful Girls’

KAYSERSBERG, France (AP) — Training according to the solar and lunar cycles has never helped any Tour de France contender climb a mountain faster, or seize the yellow jersey.

Moon science is more rewarding when it comes to the art of winemaking.

In the Alsace region visited by the peloton this week, growing wine using biodynamic methods has been paying off for the Faller family.

At the helm of the Domaine Weinbach — an ancient property planted with grapes since the ninth century — the Fallers have become leading winemakers in Alasce. They produce about 120,000 bottles a year in the seven main grape varieties of the region and sell their sought-after bottles to connoisseurs around the world.

They don’t use chemicals or pesticides, plow their rich soil and let weeds grow in harmony alongside thistles, roses and other wildflowers covering the 30 hectares of the family-run vineyard.

The family uses the lunar calendar to determine the best times for their operations.

“You have the fruit days, the flower days, root days and leaf days,” winemaker Eddy Leiber-Faller told The Associated Press. “Typically, if you want to work the ground, it’s more interesting to do it on a root day, it will have more impact. And we would bottle most of our wines on fruit days to have more fruit expression. You can also bottle certain terroir wines on root days to get more expression.” 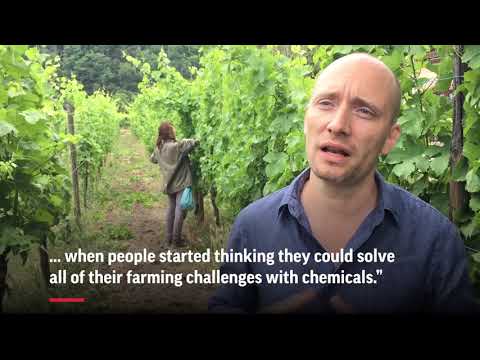 VIDEO: Using the moon's cycles in wine-making in France

“There is a bit of science in the moon cycle,” said Leiber-Faller, a former banker who rejoined the family business two years ago. “There is a science part, and a bit of a more esoteric part.”

Working with his mother Catherine and brother Theo, Eddy Leiber-Faller feels like he is going back in time, using the same natural processes Capuchin monks applied back in 1612 when they established the winery on this rich terroir.

“Biodynamic is a way to reuse and rehabilitate an ancient knowledge passed on from generation to generation,” he said. “My great-grandmother had a garden with vegetables. She did not know anything about biodynamic, but she would always look at the moon calendar to see which days or weeks she had to plant her carrots to get better results.”

Leiber-Faller said using natural products and working along with the solar and lunar cycles improves not only the vines’ resilience, but the taste of the final product.

“It brings more depth, because biodynamic forces the vine to grow its roots deeper in the ground,” he said. “So you get more minerality and salinity in the wines, more depth and complexity.”

The Fallers have been involved in the wine business for more than a century. After the monks lost possession of the winery during the French Revolution, two Faller brothers bought it in 1898. Their son and nephew made it a successful business, well before the family switched to biodynamic production in 1998. But the Fallers had already reduced the use of yields to a minimum, so the switch came easily.

Leiber-Faller insists he is not obsessed with biodynamic methods, though.

“It’s just a tool in a box, not the endgame, or a religion,” he said. “The endgame is to make the best possible wine.”

And he is quite good at it. Elevated on well-drained granite soil, the Weinbach Grand Cru Schlossberg is a must. This mineral Riesling widely praised for his finesse was the first grand cru of Alsace to get classified, in 1972.

Teuns and Ciccone were rewarded for their long breakaway on the terrible climb to the ski station in the Vosges mountains of eastern France. Geraint Thomas, the defending champion, rode strongly on the final incline, getting ahead of his teammate Egan Bernal. The day’s losers were Vincenzo Nibali and Romain Bardet, who both got dropped.

CULTURE: Since the Planche des Belles Filles mountain was added to the Tour program back in 2012, many followers have been wondering about the origins of its name, which translates as the Board of the Beautiful Girls.

According to a local legend, young women from the nearby town of Plancer-les-Mines fleeing Swedish mercenaries took shelter in the wooden mountain during the 17th-century Thirty Years’ War. They could not escape the soldiers’ chase and, fearing rape, threw themselves into a lake. Moved by the collective suicide, one of the soldiers engraved an epitaph for the “beautiful girls” on a wooden board.

QUOTE OF THE DAY: “I didn’t expect to win so early in my first Tour” — Teuns.

STAT OF THE DAY: 16.7 — In kilometers per hour, the average speed achieved by Teuns in the final kilometer, which featured a 24% incline.

NEXT ON THE MENU: After an intense effort over four climbs, Tour main contenders should be able to enjoy less stressful day during the race’s longest stage, a 230-kilometer (143-mile) mainly flat trek from Macon to Chalon-sur-Saone that will give sprinters an opportunity to shine.