For Auschwitz survivor, telling her story is reason to live

NEW YORK (AP) — Bronia Brandman pulls up a sleeve on her leather jacket and shows the blue tattoo inked on her forearm that is a mute testimony to her pain under the Nazis at Auschwitz.

Seventy-five years after the liberation of Auschwitz, telling her story is the driving force of Brandman’s life. Her mission is to educate others. The 88-year-old said being among the last who can offer personal testimony is especially important at a time when a rising tide in global anti-Semitism is spreading “like wildfire,” while fewer young people know about the Holocaust and its death camps. “Sixty percent of millennials means between 18 and 34, don’t know that Auschwitz existed. This is so painful,” she said citing a report.

“We need to teach our children what words, what racism, what lies mean...” Brandman, said during an interview at Manhattan’s Museum of Jewish Heritage. Standing near an exhibit about Auschwitz her words had a poignancy. The display included concrete posts from a camp fence covered in barbed and electrified wires, a collection of prisoners’ personal items and a rusty, German rail car like those used to transport women, men and children to Auschwitz and other death camps. As she spoke, a group of students visiting the museum, spontaneously gathered around and sat quietly on the floor and listened to her story. 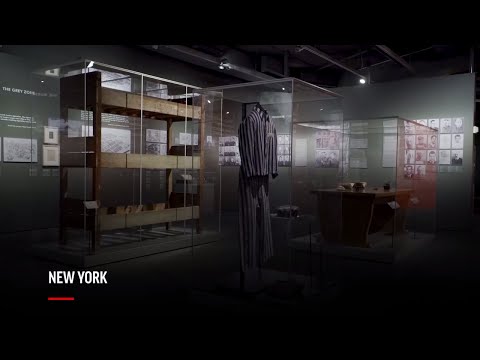 Brandman was born in the town of Jaworzno, Poland in 1931. She grew up in her grandfather’s home with her five siblings, and her parents, who owned a hardware store. She led an idyllic life until the war began, and Jewish families were forced from their homes and businesses, and then rounded up. Most of her immediate and extended family was sent to the concentration camps. She never saw her parents and one of her two brothers again.

Brandman and her three sisters evaded capture, hiding and surviving on little food. But they were eventually caught, crammed into a rail car made for livestock and sent to Auschwitz, where 1.1 million people, most of them Jews were gassed, shot, hanged or starved. In all, 6 million Jews were killed in the Holocaust.

Her first memory there is of Josef Mengele, the German doctor who conducted horrific experiments on thousands of Jews at Auschwitz, she said.

“We had to pass him, and it was our turn. He wore white gloves and he pointed to the three of us to the left. He pointed Mila, my oldest sister to the right. I knew what was in store for us,” she said. “I had nothing to lose. I ran to my sister’s line,” she said. Brandman realized quickly that she had abandoned her younger sisters. “It meant my baby sisters were going to the gas chambers alone,” she said.

Brandman and Mila, who was eight years older, were taken along with a mass of others, through the pathway where the infamous “Arbeit Macht Frei” sign was placed, promising that “work sets you free.” She said, after marching to the adjacent Birkenau camp, they were stripped naked and their heads shaved. They were given tin bowls, tattered clothes and wooden clogs, before they tattooed their skin, she recounted. Her number for life: 52643.

Living conditions were harsh. Ten people shared the wooden planks that served as beds. Prisoners slept so close together when one person moved, everyone had to move, she said.

Hygiene was out of the question. The prisoners never bathed, lice were rampant and many, like her, got typhus.

Her sole comfort was being next to Mila but her sister eventually contracted typhus. Brandman said she joined her sister in sick bay but there, had to make her hardest decision when Mila did not recuperate and was marked for the gas chamber. Brandman thought about it but decided not to join her.

“There was something inside of me that would not give up and give the Nazis another victory,” she wrote in her book, “The Girl Who Survived: A True Story of the Holocaust.” “It was the last time I saw my beloved Mila.”

Brandman stayed at the death camp for two years, from 12 to 14. At that age, she had lost more of her family and battled the enormous guilt over the death of Mila and her other siblings. Her only reason to live, she said, was her desire to one day tell her story.

She was close to death on several occasions. Once, the nurse at the sick bay hid her from Mengele in a barracks for Gentiles. Another time Mengele reversed a decision to send her to the gas chamber as he rushed to safety, afraid when air raid sirens went off signaling Allied planes were near.

When the death camps were liberated, she reunited with her surviving brother and eventually came to the United States to live with a cousin. In Brooklyn, she learned English, attended high school and college, got a Master’s degree in education and became a teacher. She also got married in 1953. She has two daughters and two grandchildren.

To this day, Brandman said, she is haunted by the memories of Auschwitz, “how can you not be” but there have been moments that have helped her heal. During a trip to Israel, she said that she felt that her long-lost identity had finally been restored. “That empowered me to laugh. And my children noticed it,” she said. “(They would tell me): “mommy, you’re laughing. It empowered me. I felt six feet tall and I am short,” she said laughing. “It empowered me to laugh for the first time.”

Still, fifty years after the end of WWII, she felt that she could not talk about the horrors. It was only in the mid-1990s when she worked as a gallery educator at the Museum of Jewish Heritage that another volunteer encouraged her to tell her story. “I said: never,” Brandman said. But eventually, she relented. Since then, she has told her story to thousands of people, including many school students.

“I still cannot cry. It is just too, too horrible,” she said. “I find my reason for living is to talk about our story.”