Cummings released a letter from White House Counsel Pat Cipollone in which he calls Cummings’ request “unprecedented and extraordinarily intrusive” and offers to provide a briefing and documents “describing the security clearance process.”

Cummings says that is not enough and that the White House posture defies “plain common sense.” He said he will consult with committee members about next steps.

The document request from the oversight panel comes amid questions about the Trump administration’s truthfulness regarding how senior adviser Jared Kushner got his high-level security clearance after career security officials recommended against it. The New York Times reported that President Donald Trump ordered officials to grant the clearance.

Speaking at the White House on Tuesday, Trump responded to a sweeping new probe from the House Judiciary Committee by calling it “presidential harassment” and a “witch hunt.” 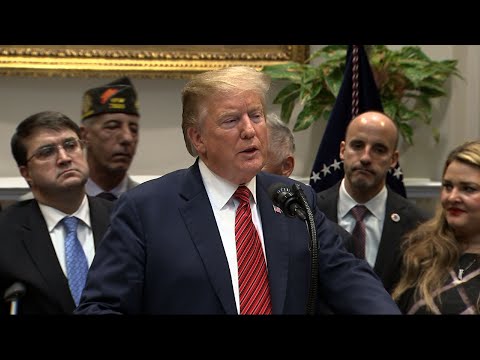 Trump argued that Democrats were more focused on investigations than “getting legislation passed.” He called the committee’s requests for documents from 81 people linked to the president and his associates a “disgrace for our country.”

The Judiciary Committee is investigating possible obstruction of justice, corruption and abuse of power.

The House intelligence committee chairman has hired new staff with experience in the intelligence community and law enforcement as he renews an investigation into Russian interference in the 2016 election and begins looking into President Donald Trump’s financial interests.

Rep. Adam Schiff announced Tuesday that he hired Daniel Goldman as senior adviser and director of investigations. Goldman formerly worked in the criminal division of the U.S. Attorney’s Office for the Southern District of New York, where former Trump lawyer Michael Cohen has pleaded guilty to campaign finance violations and other crimes. Goldman worked there until 2017.

Schiff also announced he hired Kathy Suber, who served as a government intelligence officer for two decades, and Lucian Sikorskyj, who worked for the National Security Council and served as a senior analyst to NATO.

The White House is criticizing a sweeping House probe of President Donald Trump and his administration, calling it “a disgraceful and abusive investigation into tired, false allegations.”

Trump himself summed up his reaction in one word: “Ridiculous!”

The chairman of the House Judiciary Committee, congressman Jerrold Nadler of New York, said Monday his panel is beginning the probe into possible obstruction of justice, corruption and abuse of power. Their first major action is to send document requests to 81 people linked to Trump and his associates.

The broad investigation could be setting the stage for an impeachment effort. But Democratic leaders have pledged to investigate all avenues and review special counsel Robert Mueller’s upcoming report before trying any drastic action.