PALU, Indonesia (AP) — The Latest on a powerful earthquake and tsunami that hit part of central Indonesia (all times local):

Australia’s government says it will send more than 50 medical professionals to Indonesia to help with the aftermath of a devastating earthquake and tsunami as part of a 5 million Australian dollar ($3.6 million) aid package.

Australian Foreign Minister Marise Payne told reporters in Washington: “We will be working very closely with the Indonesian government to make sure that the support we are providing is highly targeted.”

She says: “Australia is considering further support for the disaster, with the death toll expected to rise and millions affected by the crisis.”

Payne says she has been in contact with her Indonesian counterpart Retno Marsudi and Australian Prime Minister Scott Morrison is continuing talks with President Joko “Jokowi” Widodo about possible further support.

The U.N. says its humanitarian office is reporting that “needs are vast” following the earthquake and tsunami in Indonesia, with people urgently requiring shelter, clean water, food, fuel and emergency medical care. 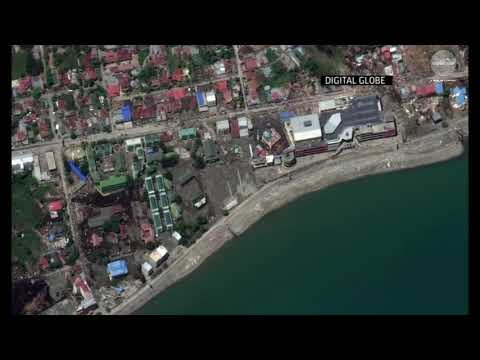 U.N. deputy spokesman Farhan Haq said Tuesday that U.N. and relief agencies are on the ground or en route. He said the agencies are working closely with the government to provide technical support.

Haq told reporters at U.N. headquarters in New York that water is the main issue because most of the water supply infrastructure has been damaged.

He says the Indonesian Ministry of Social Affairs has asked the U.N. children’s agency, UNICEF, to send social workers to the affected area to support children who are alone or became separated from their families.

Haq says the World Health Organization is warning that a lack of shelter and damaged water sanitation facilities could lead to outbreaks of communicable diseases.

Indonesia’s disaster agency says the death toll from an earthquake and tsunami disaster on a central island is now 1,234.

The magnitude 7.5 earthquake and the tsunami it generated struck Palu and nearby areas on central Sulawesi island.

Nugroho said 799 people are severely injured. He said the communities of Sigi and Balaroa have not been counted yet, meaning the toll is likely to rise.

One of the first evacuation flights from a quake-devastated region of central Indonesia has landed in East Java.

The C130 military transport aircraft that arrived at a military airport Tuesday carried dozens of people, including injured victims needing further care and treatment. It left from the city of Palu, where hundreds of people are waiting still to be evacuated.

Andi Wijaya, the airport base commander in East Java, says seven aircraft were ready to evacuate but crews had to be summoned to prepare for the flights.

The situation is increasingly desperate in the severely damaged areas of central Sulawesi island where people are running short of food, fuel and other essentials. Friday’s magnitude 7.5 earthquake and the tsunami it generated caused at least 840 deaths but some areas outside Palu have yet to be reached.

Australia’s government has given financial aid to help victims of Indonesia’s earthquake and tsunami and was talking with Indonesian authorities about sending more.

Prime Minister Scott Morrison said 500,000 Australian dollars ($360,000) in initial funding was given to the Indonesian Red Cross for the most obvious emergency aid needs, such as tarpaulins.

Australia’s ambassador was consulting the Indonesian government on more support.

Morrison told reporters in the west coast city of Perth that Australia was looking at how to best fit the needs of its neighbors in their time of need and that Australia’s support wouldn’t only be in the short-term.

Indonesia’s president has authorized the acceptance of international help, with generators, heavy equipment and tents among the most-needed items. Officials have said the European Union, United States and China have also offered help.

Residents in the disaster-devastated Indonesian city of Donggala say people there are hungry and the central government must urgently get aid there.

The city was among those hit in last week’s earthquake and tsunami, but aid has been slow to arrive due to the difficulty in reaching it. Survivors in Donggala say they worry they have been forgotten as attention has been focused on the city of Palu, which has been easier to reach.

With supplies running out, local administrator Kasman Lassa says people were taking food and other essentials from shops Tuesday.

Lassa says: “Everyone is hungry and they want to eat after several days of not eating.”

He says people going into shops “should take only cake, bread, rice. Do not take chairs, or television. Again, for cake, bread, rice, they can take it. The store owner also allows them to take food.”

Two shallow earthquakes have occurred near the eastern Indonesian island of Sumba, but no tsunami warning was issued.

State news agency Antara reported that one bridge was damaged in Wula Waijelu, but there were no other immediate reports of damage. About 750,000 people live on the island, located in eastern Indonesia in East Nusa Tenggara province near East Timor.

Indonesia is a vast archipelago stretching a similar distance to that between New York and London. It is located on the seismically active “Ring of Fire” and is frequently struck by earthquakes, volcanic eruptions and tsunamis.

Desperation is visible everywhere in areas heavily damaged by an earthquake and tsunami, four days after the disaster devastated parts of Indonesia’s central Sulawesi island.

Signs propped along roads read “We Need Food” and “We Need Support,” while traffic was snarled by people waiting for fuel.

The confirmed death toll of 844 is expected to rise as authorities reach areas that were cut off by the disaster. The magnitude 7.5 earthquake struck at dusk Friday and generated a tsunami said to have been as high as 6 meters (20 feet) in places.

Search-and-rescue teams combed destroyed homes and buildings for any trapped survivors, but they needed more heavy equipment to clear the rubble.

Nearly 50,000 people have been displaced from their homes in Palu alone, and hospitals were overwhelmed.