One of the Democrats’ star witnesses was John Dean, Richard Nixon’s White House counsel who cooperated with prosecutors during the Watergate investigation. He told lawmakers that the high court with Kavanaugh on it would be “the most presidential powers-friendly court in the modern era.”

Senators on the Judiciary Committee are likely to vote on Kavanaugh’s confirmation on Sept. 20 with a vote by the full Senate the following week. Republicans hope to confirm the judge, who would nudge the high court further to the right, in time for the first day of court’s new term, Oct. 1.

With special counsel Robert Mueller deep into his investigation of Russia’s meddling in the 2016 election, committee Democrats expressed concerns throughout the weeklong hearing that Kavanaugh would side with Trump on questions such as whether a president can be forced to testify. Kavanaugh, like previous nominees, declined to answer hypothetical questions that might come before him as a justice. 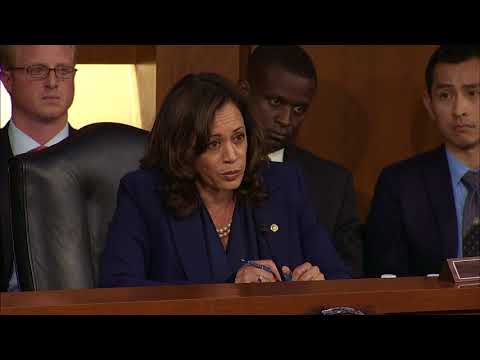 US Senator Kamala Harris on Sept. 6, 2018, questioned Kavanaugh about whether he had spoken with a particular law firm about special counsel Robert Mueller's investigation. (AP video)

Trump, campaigning in Fargo, North Dakota, said the Democrats had made fools of themselves and crowed that he was looking forward to running against “one of those people” in 2020. Committee members Cory Booker of New Jersey and Kamala Harris of California are among the Democrats considered possible candidates in the next presidential campaign.

Abortion was another main focus throughout the hearing, with Democrats portraying Kavanaugh as a judge who might vote to undercut or overturn the 1973 Roe v. Wade decision establishing a constitutional right to abortion. Senate Democrats, in the minority 51-49, hope to appeal to two Republican senators who support abortion rights to break from their party and vote against Kavanaugh.

On the Republican side, witnesses testifying in support of Kavanaugh included longtime friends and former law clerks. They talked about his intelligence and open-mindedness, calling him “thoughtful,” ″humble,” ″wonderfully warm” and a “fair-minded and independent jurist.” A number praised his concerted efforts to hire as law clerks both minorities and women.

Senate Democrats had worked into the night Thursday on Kavanaugh’s final day of questioning in a last, ferocious attempt to paint him as a foe of abortion rights and a likely defender of President Donald Trump.

But the 53-year-old appellate judge stuck to a well-rehearsed script throughout his testimony, providing only glimpses of his judicial stances while avoiding any serious mistakes that might jeopardize his confirmation.

On Friday, Democratic witnesses expressed concern about Kavanaugh’s record on a range of issues including affirmative action, the rights of people with disabilities, access to birth control and abortion. Democratic witnesses also included a student who survived the school shooting in Parkland, Florida, and Rochelle Garza, the legal guardian for a pregnant immigrant teenager whose quest for an abortion Kavanaugh would have delayed last year.

Yale law school professor Akhil Reed Amar, a liberal testifying in support of Kavanaugh, had a message for Democratic senators: “Don’t be mad. He’s smart. Be careful what you wish for. Our party controls neither the White House nor the Senate. If you torpedo Kavanaugh you’ll likely end up with someone worse.”

Read more on AP’s coverage of Kavanaugh at https://apnews.com/tag/Kavanaughnomination