COEBURN, Va. (AP) — Former coal miner John Robinson’s bills for black lung treatments run $4,000 a month, but the federal fund he depends on to help cover them is being drained of money because of inaction by Congress and the Trump administration.

Amid the turmoil of the government shutdown this winter, a tax on coal that helps pay for the Black Lung Disability Trust Fund was cut sharply Jan. 1 and never restored, potentially saving coal operators hundreds of millions of dollars a year.

With cash trickling into the fund at less than half its usual rate, budget officials estimate that by the middle of 2020 there won’t be enough money to fully cover the fund’s benefit payments.

As a surge of black lung disease scars miners’ lungs at younger ages than ever, Robinson worries not only about cuts to his benefits, but that younger miners won’t get any coverage.

“Coal miners sort of been put on the back burner, thrown to the side,” Robinson said recently, sitting at his kitchen table in the small Virginia town of Coeburn, near the Kentucky border. “They just ain’t being done right.”

President Donald Trump, who vowed to save the coal industry during the 2016 campaign, has repeatedly praised miners. At an August rally in West Virginia filled with miners in hard hats, he called them “great people. Brave people. I don’t know how the hell you do that. You guys have a lot of courage.” 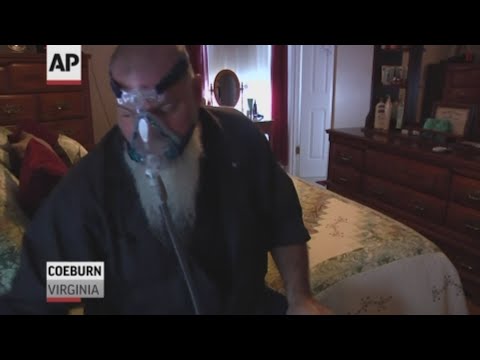 Trump made no mention of restoring the 2018 tax rate in his proposed budget released in mid-March.

The White House said in a statement Tuesday that “President Trump and this administration have always supported the mining industry by prioritizing deregulation and less Washington interference.”

Senate Majority Leader Mitch McConnell, whose home state of Kentucky is third in the nation in coal production, told a reporter from Ohio Valley ReSource in October the tax rate would “be taken care of before we get into an expiration situation.”

That didn’t happen. McConnell spokesman Robert Steurer didn’t repeat that pledge this week; rather, he wrote in an email, “benefits provided through the Black Lung Disability Fund continue to be provided at regular levels” and that McConnell “continues to prioritize maintaining and protecting the benefits.”

Trump and McConnell have reaped large contributions from the coal industry, according to the political money website Open Secrets.

Trump received more than $276,000 during the 2016 presidential election from political action committees and individuals affiliated with coal companies. His inaugural committee received $1 million from Joe Craft, CEO of Alliance Resource Partners in Tulsa, Oklahoma, and $300,000 from the Murray Energy Corporation, the nation’s largest privately-owned coal-mining company.

McConnell received more than $297,000 in coal industry donations since 2014, when he was last up for election.

Congress established the trust fund in 1978. Until the rate expired, money came from an excise tax of $1.10 per ton on underground coal and 55 cents on surface-mined coal that brought in $450 million last year. Rates fell to about 50 cents and 25 cents when lawmakers failed to act on its Dec. 31 expiration date.

The fund provides health benefits and payments to about 25,000 retired miners. Most worked for companies that are now bankrupt. Many, including Robinson, struggle to breathe as their lungs are slowly stifled by tiny dust and particles trapped there.

Robinson was 47 when he was diagnosed, part of a wave of younger miners that doctors and experts say have been swept up in a new black lung epidemic in Appalachia. Robinson, now 53, and others who depend on the fund are disappointed in McConnell and other leaders who typically enjoy miners’ support.

“I just feel that Mitch McConnell has let the citizens of Kentucky down, especially the miners,” said Patty Amburgey, whose husband, Crawford, died of black lung disease at age 62 in 2007. She draws a monthly widow’s payment through his black lung disability benefits. “And now there’s an epidemic of black lung.”

Dr. Brandon Crum has watched that epidemic unfold at his Pikeville, Kentucky, radiology clinic. In less than four years, Crum has seen 200 miners diagnosed with a severe form of black lung disease, called pulmonary massive fibrosis. The nation had 31 such diagnoses in the 1990s, according to the National Institute for Occupational Safety and Health.

“We’re looking at men in their 30s and 40s on oxygen, being evaluated for lung transplants,” Crum said. “Those are usually middle-age individuals with younger families, so it affects their wives, a lot.”

His findings were published by the Centers for Disease Control and Prevention in a December 2016 report that showed a shockingly high level of severe black lung cases at his clinic.

Amburgey, of Letcher County, Kentucky, said there will be fewer benefits for the growing number of younger miners with black lung if the fund is depleted. Robinson said he’s now worried the trust fund’s “pot of money will dry up.”

West Virginia Sen. Joe Manchin and other coal-state Democratic senators are pushing a bill to shore up the fund by restoring the larger tax for 10 years. Manchin said in a statement that lawmakers “cannot continue to allow these solutions to be put off again and again.” That bill is in a Senate finance committee.

The mining industry supported the increased tax rate’s expiration, calling the effort to maintain it an unnecessary tax increase. The National Mining Association, which speaks for the industry, says the lower rate “will be sufficient to cover monthly benefit costs for the fund.” The group argued extending the rate would lead to job losses.

The May 2018 GAO report contradicts that claim, saying the fund’s beneficiaries could multiply “due to the increased occurrence of black lung disease and its most severe form, progressive massive fibrosis, particularly among Appalachian coal miners.”

The increase in younger black lung sufferers will put more pressure on the fund, as the industry continues to shrink.

“I think people always thought they would get (black lung) if they worked long enough in the mines, but I think it’s a disease they thought would affect them at the end of their life, in their 70s or 80s,” Crum said.

Amburgey says Trump reneged on his pledge to support miners.

“Mr. Trump promised that he would bring the mines back and take care of the miners, and that is not happening,” she said. “He promised us a snowball in July.”