CINCINNATI (AP) — Investigators who interviewed a serial killer about two victims he said he killed described him Friday as a friendly, normal-appearing person with chillingly abnormal desires.

Hamilton County Prosecutor Joe Deters announced that Samuel Little has been indicted for the 1981 murder of Anna Lee Stewart. She was last seen alive in Cincinnati. Her body was dumped in Grove City, near Columbus.

Little, who claims to have killed more than 90 women, is also charged with a second murder in Cincinnati. He confessed to killing a woman whose identity remains a mystery.

Little, who turned 79 Friday, told investigators he targeted women who wouldn’t be missed right away, such as street people or prostitutes, and whose necks appealed to him for strangulation, which gave him sexual gratification.

“To him, strangulation was sex,” said Mark Piepmeier, chief assistant Hamilton County prosecutor. “That’s how bizarre this person is. That struck both of us as ‘this cat’s different than anybody we normally deal with.’ ”

“He described it as telling a normal man that normal sexual intercourse was a crime,” said Cincinnati Police Detective Kelly Best. “And when he got the urge, that’s when he would seek out a woman and commit his crimes.”

She and Piepmeier said Little seemed to be trying his best to help them. 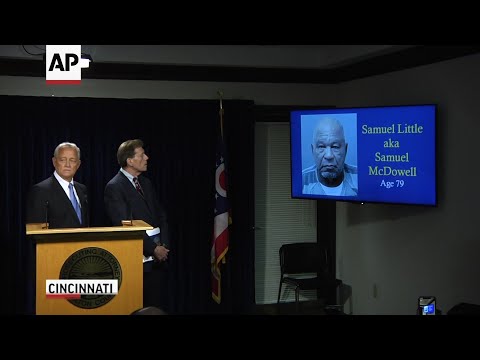 “He was friendly, conversational, very open, very helpful,” Best said, adding that there appeared to be nothing about him that would give “a vibe” of danger.

Little, also known as Samuel McDowell, provided a sketch and description of the second Cincinnati woman. Deters said interns from his office are studying coroner’s records in hopes of determining who she was.

Deters and Franklin County Prosecutor Ron O’Brien, who joined him from Columbus, both called Little “evil.”

O’Brien came to Cincinnati two days after announcing the murder indictment of an Ohio doctor, William Husel, in the deaths of 25 hospital patients who, authorities say, were killed with deliberate overdoses of painkillers, many of them administered by other medical workers on his orders. It’s one of the biggest cases of its kind ever brought against an American health care professional.

“You think you’ve seen it all ... but then something new happens and you shake your head,” O’Brien said of the two cases.

Deters expects Little will plead guilty later this year to the Hamilton County cases via Skype from prison in California.

Little was indicted last week in Cleveland for the strangulation deaths of two women. Authorities are trying to identify a third Cleveland-area victim.

Little’s toll appears to have surpassed the likes of serial killers including John Wayne Gacy, Ted Bundy and Green River’s Gary Ridgway. Little was convicted in California of three slayings in 2013 and pleaded to another killing last year in Texas .

Little grew up in Lorain, in northeast Ohio. The FBI in February released sketches drawn by Little of some of his victims based on his memories of them.

Ector County District Attorney Bobby Bland in Odessa, Texas, said 50 cold homicide cases have been closed as a result of Little’s confessions and that most of the remaining unsolved slayings occurred in California.