As the threat of impeachment looms, President Donald Trump is digging in and taking solace in the base that helped him get elected: conservative evangelical Christians who laud his commitment to enacting their agenda.

Trump told reporters last week that “the biggest pastors” have assured him that Christians are “electrified” by his clash with Democrats who are probing his pushes for Ukraine to launch an investigation into a political rival, former Democratic Vice President Joe Biden.

And the prominent evangelicals who have proven Trump’s most stalwart allies are staying in his corner for the impeachment fight, even as some push back against his withdrawal of U.S. troops from northern Syria — a move that imperils scores of Kurdish Muslims and Christians in the region. Although Trump’s Syria pullback is alarming conservative Christians whose support he needs to win reelection, their rallying against his impeachment indicates a bond that appears strong enough to withstand the current foreign policy rift as 2020 balloting nears.

South Carolina pastor and televangelist Rev. Mark Burns, a backer since the early days of Trump’s 2016 campaign, said in an interview that “it’s important that religious leaders reach out to the president.” Burns contended that Trump’s struggles are partly connected to his Christian faith, adding that “Satan wants to remove a vessel that God has installed to again be a blessing to the religious community.” 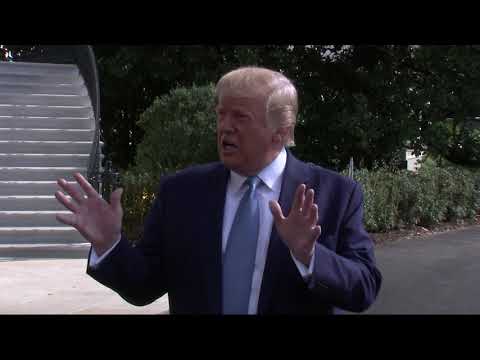 Burns said he spoke with Trump briefly last week, when the president met with black conservatives at the White House, and recalled hearing the Holy Spirit “as I crossed the street to walk into Trump Tower” for their first meeting in 2015. Maryland-based Pentecostal Bishop Harry Jackson, who has met with Trump at the White House, said that he plans to hold a large prayer gathering this year for “healing in the nation.”

But it’s not clear whether Trump is seeking or receiving the religious solace that former President Bill Clinton sought as his own impeachment plight intensified two decades ago. Clinton named two progressive pastors to provide spiritual reprieve in 1998, as an extramarital affair earlier in his presidency metastasized into national scandal.

The current president has no religious leaders in such a defined role, though he gets frequent backup from Southern Baptist megachurch pastor Robert Jeffress — who warned of “a civil war like fracture” from removing Trump — and Rev. Franklin Graham. The son of the late Rev. Billy Graham has denounced the impeachment investigation but this week asked followers to “pray w/me” that Trump would reconsider his ceding of Syrian territory to Turkey.

Another evangelical Trump ally who has defended Trump’s Syria withdrawal, Liberty University President Jerry Falwell Jr., said in an interview that he and the president are in regular communication but described himself as “not a spiritual adviser, not a counselor. I’m just his friend.” Falwell Jr.’s wife Becki said she also maintains a friendly, mutually supportive text-message conversation with First Lady Melania Trump.

Rev. Tony Suarez, who joined Trump’s evangelical advisory board during the 2016 campaign, said that he and the president did not talk impeachment when he last visited the White House two weeks ago. If he’d had the chance, Suarez said, he would offer to pray with Trump, just as “I would offer to pray with anyone who was going through a trying period in their life.”

The Democratic impeachment inquiry deals with Trump’s bid to get Ukrainian authorities looking into unfounded corruption allegations against Joe Biden, a top rival in the 2020 election, and his son, Hunter. Biden’s son served on the board of a Ukrainian gas company while the former vice president steered U.S. policy toward Kyiv.

No evidence has emerged to support Trump’s charges of improper behavior by the Bidens. But Suarez, the executive vice president of the National Hispanic Christian Leadership Conference, and other pro-Trump evangelicals dismissed the impeachment investigation as a politically motivated effort by Democrats to undercut the president.

As Trump celebrates their support, with plans to address religious conservatives on Saturday at the Values Voter Summit in Washington, dozens of other pastors are aligning to support the impeachment inquiry with a day of prayer on Sunday.

“We welcome the light of truth, honesty, and transparency that this moment affords our country, whatever may be revealed,” wrote members of the group Red Letter Christians, many of them progressives, who signed a statement supporting Democrats’ investigation. “This is not a matter of partisanship, but of deepest principle.”

One signatory on the Red Letter group’s call for prayer is Rev. Tony Campolo, who counseled and prayed with Clinton during the nation’s last impeachment crisis.

Campolo recalled concerns about appearing to have been “used” for cover by the former president. Nonetheless, Campolo described his role as helping Clinton “acknowledge he had sinned and publicly repent.” He challenged religious conservatives close to the current president to seek repentance from him.

“I would like religious leaders who surround the president to raise questions about his honesty,” Campolo, a professor emeritus at Pennsylvania’s Eastern University, said in an interview. “There are so many things he says that are blatantly untrue.”

The religious leaders are representative of Trump’s unwavering support from the evangelical community. No degree of skepticism about Trump’s character has shaken his support from white evangelicals, an overwhelming majority of whom have consistently registered approval of the president in polls. A Pew Research Center survey in August found 77% of white evangelical Protestants approving of Trump’s job performance.

One potential vulnerability for Trump may be the geopolitical fallout from his administration’s Syria withdrawal, which already has alienated congressional Republicans.

If the situation in Syria “affects Israel’s independence in any way, then that would put people in a really tough spot,” Sam Rohrer, a former Pennsylvania state lawmaker and president of the conservative American Pastors Network, said in an interview. But Rohrer also made clear that “the president will get the benefit of the doubt” from his evangelical backers.

Indeed, while Trump’s use of profane language and the multiple sexual assault allegations against him have sparked debate about why the religious right’s support is so enduring, Suarez says most backers never expected the president to be “the model of Christianity.”

Noting that “as the Bible says, all of us have fallen short,” Suarez said Trump’s close ties to his evangelical base stem from his success achieving its policy goals, from restricting abortion to defending Israel.

Evangelical strategist Ralph Reed sounded a similar note this week, telling Fox News that “whatever you think of Trump personally, it is undeniable” that he has succeeded in enacting conservative Christians’ agenda. Reed is set to publish a book next year marshaling Christians on the president’s behalf, and his Faith and Freedom Coalition group plans to spend millions of dollars mobilizing voters.

Johnnie Moore, another member of Trump’s evangelical advisory board, lauded the “substantive relationship” and access his community has to the White House.

“When evangelicals disagree with the administration, they have an opportunity to have a dialogue about those disagreements,” Moore said in an interview. “And very often, those discussions have led to a change of policy.”