DALLAS (AP) — A Texas police officer has been indicted on a murder charge two weeks after shooting the unarmed driver of a truck that had been reported stolen as the vehicle swerved past his police SUV in a Dallas parking lot.

On June 12, police in suburban Farmers Branch spotted a white pickup that had been reported stolen from the city of Irving. Dunn followed the vehicle over the Dallas city line to a shopping center and opened fire as Moreno was pulling out of the parking lot, police said. Surveillance video appears to show Dunn firing into the driver’s side of the truck as it makes a sweeping turn around his cruiser.

Carlos Quintanilla, who is acting as a spokesman for the Moreno family, commended the speedy indictment.

“This sends a message that officers do not have the right to kill someone, that officers have to comply with the rule of law,” said Quintanilla.

Dunn, who is on administrative leave, could not be immediately reached for comment. Farmers Branch police declined to identify his attorney and a spokeswoman for the Dallas County District Attorney’s office said she does not know who represents the officer. His indictment is set to be formally released Friday. 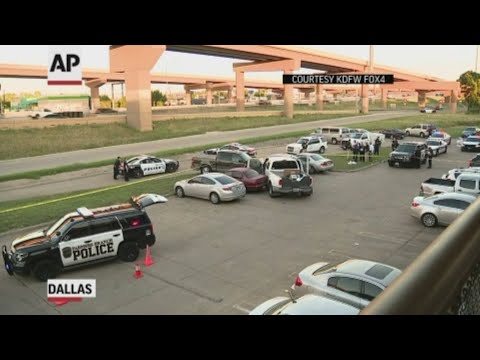 Dunn surrendered to police in Seagoville around 8:30 p.m. Wednesday and was released from the city jail about an hour later on a $150,000 bond, according to police records. The officer is a military veteran and has worked for the Farmers Branch Police Department for nearly 13 years, Police Chief David Hale said.

During a Thursday press conference, Hale said the shooting was a tragedy and that he hopes the judicial process brings closure.

“Our hearts go out to the Moreno family for their loss,” Hale said. “Let us also be reminded that Farmers Branch police Officer Mike Dunn’s life has been forever changed.”

Hale said the surveillance footage of the shooting was “difficult to watch” but “sometimes videos do not tell the entire story.” A Dallas police spokeswoman said Dunn’s body camera didn’t capture the shooting but did start recording minutes after it. No weapon was found on Moreno or in the truck, she said.

Dunn is the second Farmers Branch officer to be charged with murder in recent years.

Last year, a jury found Ken Johnson guilty of murder for the 2016 shooting of a 16-year-old who burglarized his SUV. Johnson was sentenced to 10 years in prison after trail evidence showed the off-duty officer chased Jose Cruz and another teenager with his sport utility vehicle, rammed their car and then repeatedly fired into it, killing Cruz.