The Latest: US commander: IS fighters could ‘re-emerge’

BAGHOUZ, Syria (AP) — The Latest on the battle against the Islamic State group in Syria (all times local):

The U.S.-led coalition in Syria and Iraq says the victory of the Syrian Democratic Forces over the Islamic State’s self-declared caliphate does not mean that violent extremism is over.

The 74-nation coalition said in a statement Saturday that since the beginning of operations in 2014, 7.7 million people have been liberated from IS control in an area measuring nearly 110,000 square kilometers (42,471 square miles).

U.S. Army Lt. Gen. Paul LaCamera is the coalition commander. He said that “the end of the so-called physical caliphate is a historic military accomplishment.”

But he warned that IS fighters “are preserving their force and are waiting for the right time to re-emerge.”

LaCamera said the coalition will continue working with its partners to ensure the enduring defeat of IS.

President Donald Trump says the U.S. will remain vigilant against the Islamic State militant network and is warning prospective recruits that they will be “dead” if they join it.

Trump said in a statement released Saturday that the group’s loss of all its territory in Iraq and Syria is evidence of its false narrative, and he called the militants “losers” who will always be “losers.” He accused the group of brutal executions, exploiting children as soldiers and sexually abusing and killing women and children. 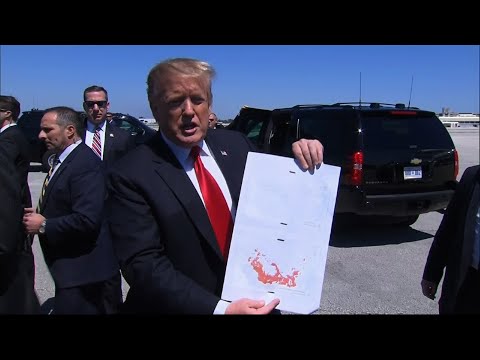 The U.S.-backed Syrian Democratic Forces announced Saturday it had liberated the last village held by IS in Syria. That was a day after Trump said the militants no longer control any territory in Syria.

Trump is spending the weekend in Florida.

U.S. Secretary of State Mike Pompeo says the United States still has a lot of work to do despite the territorial defeat of the Islamic State group in Syria.

Asked by reporters during a visit to Lebanon Saturday whether the U.S. will provide additional funding to prevent a resurgence of the group, Pompeo said “our mission hasn’t changed.”

“We still have work to do to make sure that radical Islamic terrorism doesn’t continue to grow,” he added.

The U.S.-allied militia known as the Syrian Democratic Forces announced Saturday it had liberated the last village held by IS in Syria, declaring victory over the group.

The announcement came a day after Trump said the militants no longer control any territory in Syria, a victory he had been teasing for days.

Britain’s prime minister has praised the liberation of the last piece of Islamic State-held territory in Syria as a historic milestone.

Theresa May said in a statement Saturday that it would not have been possible without the “commitment, professionalism and courage” of British forces and their global coalition partners.

She praised their “tireless work and extraordinary courage.”

May cautions that the coalition must not lose sight of the threat Islamic State poses. She said the government is committed to wiping out the group’s “poisonous ideology.”

French President Emmanuel Macron has paid tribute to the international coalition and its allies after U.S.-backed forces declared military victory over the Islamic State group in Syria.

Macron tweeted that “a major danger to our country is now eliminated, yet the threat remains and the fight against terrorist groups must continue.”

He expressed condolences for the victims of IS.

France has been a member of the coalition fighting the IS since 2014. IS claimed responsibility for several attacks in France, including assaults in Paris in 2015 that killed more than 130 people.

A senior U.S. diplomat says the territorial defeat of the Islamic State group is a “critical milestone” that delivers a crushing and strategic blow to the extremist group.

William Roebuck, the State Department’s official in charge of Syria, adds, however, that the campaign against IS is not over, saying the group remains a significant threat in the region.

“We still have much work to do to achieve an enduring defeat of IS,” Roebuck said Saturday at a ceremony in eastern Syria’s al-Omar oil field base, celebrating victory over the group in Baghouz, IS’ last stronghold in Syria.

A Kurdish commander has formally announced the “physical defeat” of the Islamic State group and appealed for continued assistance until the full eradication of the extremist group.

General Mazloum Kobani, the commander-in-chief of the Kurdish-led Syrian Democratic Forces, says his forces have destroyed the group’s so-called caliphate after liberating their last stronghold in the village of Baghouz.

The SDF has been Washington’s partner on the ground in Syria, spearheading the fight against the Islamic State group for the past five years.

“We are proud of what we have accomplished,” Kobani said at a press conference in eastern Syria, citing the sacrifices and bravery of SDF fighters.

Kobani spoke Saturday few hours after the group announced the full liberation of Baghouz from IS militants after a grueling weeks-long battle.

U.S.-backed forces have declared military victory over the Islamic State group in Syria after liberating the last pocket of territory held by the militants, marking the end of a brutal self-styled caliphate the group carved out in large parts of Iraq and Syria in 2014.

After weeks of heavy fighting, the tent camp where the militants had made their final stand in the village of Baghouz was, by Saturday, bombed to shreds. A field pitted with abandoned trenches and bomb craters, and littered with scorched tents and the twisted metal carcasses of vehicles, was all that remained. Half buried in the dirt was a tattered shred of IS’s notorious black flag, while a giant yellow flag belonging to the Syrian Democratic Forces fluttered atop a shell-pocked building.

“Baghouz is free and the military victory against Daesh has been achieved,” tweeted Mustafa Bali, a spokesman for the Kurdish-led SDF, referring to IS by its Arabic acronym.