BERGAMO, Italy (AP) — The priest gave a final benediction. There were no flowers, no embraces. Francesca Steffanoni and her mother hurried away from Bergamo’s main cemetery, their furtive farewell lasting no more than 5 minutes.

Bergamo is the epicenter of the hardest-hit province of Italy’s hardest-hit region, Lombardy, the site of hundreds of coronavirus deaths. Families here are deprived of a bedside farewell with virus-stricken loved ones, or even a traditional funeral, and the cemetery is so overwhelmed by the number of dead that military trucks transported 65 bodies to a neighboring region for cremation this week.

Steffanoni had taken her mother to watch as the coffin containing an 82-year-old relative — a widower with a heart condition, struck down with the virus — was driven inside the imposing gates. They wore masks and gloves; they kept their distance.

“In theory, we should not have gone. But it was one of her last relatives who remains,” Steffanoni said.

According to unofficial figures, more than 600 people infected with the virus have died in the province, which is tucked up against the Italian Alps and accounts for more than a quarter of all deaths in Lombardy, even though it represents only a tenth of the region’s population of 10 million.

More on the virus outbreak:

“We are confronting the biggest COVID emergency after Wuhan,” said Dr. Luca Lorini, head of intensive care at Bergamo’s main hospital, named for native son Pope John XXIII, where nearly 500 beds are dedicated to people suffering severe symptoms of the virus, 80 of those in intensive care. “The numbers tell us this.”

But the numbers thus far don’t tell the whole story.

Provincial mayors are sounding an alarm that the virus-related toll fails to reflect a spike in deaths in the general population among those who have not been tested. Last week alone, 400 people died in Bergamo and 12 neighboring towns — four times the number who died the same week the previous year, according to the Bergamo mayor’s office. Only 91 of those had tested positive for the virus.

People on the front lines of the virus fight, including hospital officials, funeral operators, city administrators and union leaders, told The Associated Press that Bergamo’s crisis might have been prevented had their individual requests to create a red zone around the area as early as Feb. 23 been heeded.

Instead, strict containment measures were extended to Bergamo only on March 8, two weeks later, without ever isolating two valley towns where the outbreak was first recorded.

“When the virus arrived here, there was no containment and it spread through the valleys very quickly. ... Some said it was the normal flu. We doctors knew it was not,” Lorini said.

Funeral parlors already were registering an alarming increase in deaths starting in January and February, an anomaly they signaled to officials, said Antonio Ricciardi, head of a local funeral parlor association. His business handled 611 funerals from March 1-18, when the usual pace is just over 100 in a full month.

After the first death in nearby Alzano Lombardo was recorded and other cases confirmed on Feb. 23, doctors at the Pope John XXIII Hospital set up an emergency ICU to handle virus patients. That was two days after the lockdown of 10 towns in southern Lombardy, which has been largely declared a success and served as a model for the nationwide shutdown instituted March 9. 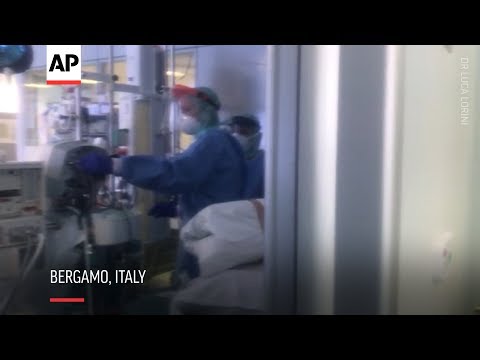 No official explanation has been given for the decision not to extend red-zone status to Bergamo. Regional welfare official Giulio Gallera acknowledged the question but said he didn’t want to place blame, adding “we are in a situation in which the entire region has substantially adopted particularly rigid measures.”

Eliana Como of the influential FIOM metalworkers union said she believes the area’s economic significance played a role in the decision not to place a red zone around towns at the mouth of the Seriana Valley, home to steel production and artisanal workshops.

“I think the business interests weighed heavily on the decision,” said Como, who lives in Bergamo.

In the epidemic’s fourth week, Lorini estimates that the true number of infected in the area is 5 to 10 times the official figure of 4,645. The current regimen allows testing only of people who show up at a screening area at the hospital with severe symptoms, missing people who are sick at home.

Coping With the Outbreak:

“We believe the true numbers (of COVID-19-related deaths) are hidden,” said Francesco Alleva, spokesman for Bergamo’s mayor. “Because many people are dying at home or in structures for the elderly, and they have never been tested for the virus.”

That uncertain toll is at the heart of officials’ constant appeals for people to stay home. Police cars circulate Bergamo with loudspeakers instructing people not to go out except for true necessities, such as work or grocery shopping. To further discourage people from leaving their homes, Mayor Giorgio Gori this week turned off the public wi-fi and closed down gambling machines in tobacco shops, which remain open and where people can also pay some bills.

Though the increase in positive diagnoses has narrowed from some 500 a day this past weekend to over 300 on Thursday, Lorini said it would take until at least next week to determine if the containment measures were having an impact.

The inability to comfort virus-stricken family members in the hospital or even attend a funeral has been among the most wrenching aspects of the still-unfolding emergency. Hospital wards try to help by phoning updates to loved ones and allowing phone calls when patients start to recover. But when death is near, Lorini said, a visit would be “a useless explosion of contagion.”

“It is terrible to lose a loved one and not be able to hug them. But that is what has happened in epidemics for a thousand years, and what will also happen for the next thousand years,” Lorini said.

Once a loved one with the virus dies, family members are not permitted to choose a favorite outfit for burial. By government decree, the dead are buried in the clothes they died in, wrapped in sterile blankets and placed inside coffins as quickly as possible.

“There is a huge psychological issue for family members who cannot see the body,” Ricciardi said. “Without a body, it is hard to realize a death occurred.”

The sobering toll hits in full force with just a glance at the local newspaper, L’Eco di Bergamo, which has seen the number of pages dedicated to death notices multiply from one to nine, 10, even 11 pages.

In a notice in Wednesday’s edition, the family members of Bruno Maffeis, who died at age 66, expressed a “heartfelt thank you to the doctors and personnel of Pope John Hospital in Bergamo, and in particular to Dr. Carlo Fino for his generous availability.”

“As specified by the government, the funeral will be celebrated at a future date to be decided,” the notice said.