The Latest: Leahy backs Sanders in shift from 2016

On the first day of his presidential campaign, Bernie Sanders picked up the support of his fellow home-state senator, Democrat Patrick Leahy.

Leahy, who endorsed Hillary Clinton in the 2016 Democratic primary, says he’ll back Sanders this year.

In a statement, Leahy said the Democratic field was strong and “Bernie’s entry makes the field even stronger.” He called Sanders “a proven leader with a strong message.”

Also supporting Sanders is Vermont Rep. Peter Welch, who also backed him in 2016.

Sanders is the sixth senator competing in the primary. He joins Sens. Kamala Harris of California, Cory Booker of New Jersey, Amy Klobuchar of Minnesota, Kirsten Gillibrand of New York and Elizabeth Warren of Massachusetts.

That’s according to a person familiar with the campaign who wasn’t authorized to publicly disclose the early numbers and spoke to The Associated Press on the condition of anonymity. The numbers were amassed less than four hours after Sanders announced Tuesday morning that he would run again. 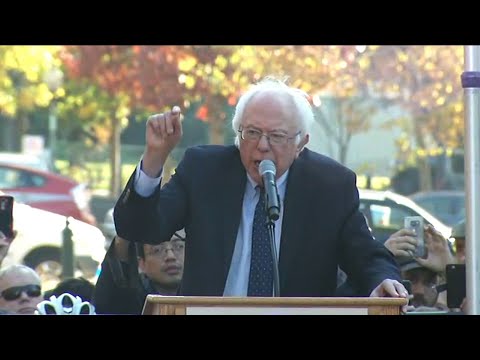 Sanders identifies as a democratic socialist and unsuccessfully challenged Hillary Clinton during the 2016 Democratic primary.

President Donald Trump’s campaign claims Vermont Sen. Bernie Sanders “has already won the debate in the Democrat primary, because every candidate is embracing his brand of socialism.”

Sanders, an independent who describes himself as a democratic socialist, announced on Tuesday that he’s running for the 2020 Democratic presidential nomination.

In a statement, Trump campaign national press secretary Kayleigh McEnany said the American people “will reject an agenda of sky-high tax rates, government-run health care and coddling dictators like those in Venezuela.”

Sanders embraces proposals ranging from “Medicare for All” to free college tuition. He describes his 2020 White House bid as a “continuation of what we did in 2016.” He told CBS “these ideas and many more are now part of the political mainstream.”

Vermont Sen. Bernie Sanders is describing his new White House bid as a “continuation of what we did in 2016.”

Sanders notes that policies he advocated for in 2016 are now embraced by the Democratic Party.

Sanders says, “You know what’s happened in over three years? All of these ideas and many more are now part of the political mainstream.”

Sanders was asked Tuesday on CBS whether he believes the Democratic Party has come his way. He says, “I don’t want to say that. Most people would say that.”

The 77-year-old self-described democratic socialist challenged Hillary Clinton in the Democratic presidential primary in 2016 and said on Tuesday that he planned to again seek the nomination.

Sanders has reshaped Democratic politics and earned a loyal following with his passionate defense of liberal proposals including free college tuition and single-payer health care. But he will face off against several other Democratic candidates who also want to appeal to the party’s base.