Warning system might have saved lives in Indonesian tsunami

MAKASSAR, Indonesia (AP) — An early warning system that might have prevented some deaths in the tsunami that hit an Indonesian island on Friday has been stalled in the testing phase for years.

The high-tech system of seafloor sensors, data-laden sound waves and fiber-optic cable was meant to replace a system set up after an earthquake and tsunami killed nearly 250,000 people in the region in 2004. But inter-agency wrangling and delays in getting just 1 billion rupiah ($69,000) to complete the project mean the system hasn’t moved beyond a prototype developed with $3 million from the U.S. National Science Foundation.

It is too late for central Sulawesi, where walls of water up to 6 meters (20 feet) high and a magnitude 7.5 earthquake killed at least 832 people in the cities of Palu and Donggala, tragically highlighting the weaknesses of the existing warning system and low public awareness about how to respond to warnings.

“To me this is a tragedy for science, even more so a tragedy for the Indonesian people as the residents of Sulawesi are discovering right now,” said Louise Comfort, a University of Pittsburgh expert in disaster management who has led the U.S. side of the project, which also involves engineers from the Woods Hole Oceanographic Institute and Indonesian scientists and disaster experts. 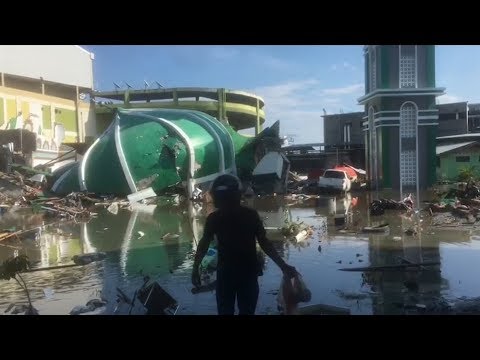 “It’s a heartbreak to watch when there is a well-designed sensor network that could provide critical information,” she said.

After a 2004 tsunami killed 230,000 people in a dozen countries, more than half of them in the Indonesian province of Aceh, a concerted international effort was launched to improve tsunami warning capabilities, particularly in the Indian Ocean and for Indonesia, one of world’s most earthquake and tsunami-prone countries.

Part of that drive, using funding from Germany and elsewhere, included deploying a network of 22 buoys connected to seafloor sensors to transmit advance warnings.

A sizeable earthquake off Sumatra island in 2016 that caused panic in the coastal city of Padang revealed that none of the buoys costing hundreds of thousands of dollars each were working. They’d been disabled by vandalism or theft or just stopped working due to a lack of funds for maintenance.

The backbone of Indonesia’s tsunami warning system today is a network of 134 tidal gauge stations augmented by land-based seismographs, sirens in about 55 locations and a system to disseminate warnings by text message.

When the 7.5 quake hit just after 6 p.m. Friday, the meteorology and geophysics agency issued a tsunami alert, warning of potential for waves of 0.5 to 3 meters (2 to 10 feet). It ended the warning at 6:36 p.m. That drew harsh online criticism, but the agency’s head said the warning was lifted after the tsunami hit. It’s unclear exactly what time tsunami waves rushed into the narrow bay that Palu is built around.

“The tide gauges are operating, but they are limited in providing any advance warning. None of the 22 buoys are functioning,” Comfort said. “In the Sulawesi incident, BMKG (the meteorology and geophysics agency) canceled the tsunami warning too soon, because it did not have data from Palu. This is the data the tsunami detection system could provide.”

Adam Switzer, a tsunami expert at the Earth Observatory of Singapore, said it’s a “little unfair” to say the agency got it wrong.

Whatever system is in use, he said, the priority after an earthquake in a coastal area should be to get to higher ground and stay there for a couple of hours.

Power outages after the earthquake struck meant that sirens meant to warn residents to evacuate did not work, said Harkunti P. Rahayu, an expert at the Institute of Technology in Bandung.

“Most people were shocked by the earthquake and did not pay any thought that a tsunami will come,” she said.

Experts say the prototype system deployed offshore from Padang — a city extremely vulnerable to tsunamis because it faces a major undersea fault overdue for a massive quake — can provide authoritative information about a tsunami threat within 1 to 3 minutes. That compares with 5 to 45 minutes from the now defunct buoys and the limited information provided by tidal gauges.

The system’s undersea seismometers and pressure sensors send data-laden sound waves to warm surface waters. From there they refract back into the depths, traveling 20 to 30 kilometers (12 to 20 miles) to the next node in the network and so on.

The Padang network’s final undersea point needs just a few more kilometers of fiber optic cable to connect it to a station on an offshore island where the cascades of data would be transmitted by satellite to the geophysics agency, which issues tsunami warnings, and to disaster officials.

The Associated Press first reported on the system in January 2017, when the project was awaiting Indonesian funding to lay the cables. Since then, agencies involved have suffered budget cuts and the project bounced back and forth between them.

A December 2017 quake off the coast of Java close to Jakarta reignited interest and the geophysics agency made getting funding a priority. In July, the Ministry of Finance in July approved funding to purchase and lay the cable.

But at an inter-agency meeting in September, the three major agencies involved failed to agree on their responsibilities and the project was “simply put on hold,” Comfort said.

Indonesian officials who’ve been supportive of the new early warning system did not immediately respond to requests for comment.

Since the 2004 tsunami, the mantra among disaster officials in Indonesia has been that the earthquake is the tsunami warning and signal for immediate evacuation. Not everyone is convinced a tsunami detection system is essential.

“What Indonesian colleagues have commented upon is that people were confused about what to do with the alert information,” said Gavin Sullivan, a Coventry University psychologist who works with the Indonesian Resilience Initiative on a disaster preparation project for the Indonesian city of Bandung.

The fact that people were still milling around Palu’s shoreline when waves were visibly approaching shows the lessons of earlier disasters haven’t been absorbed.

“This points to the failing to do appropriate training and to develop trust so that people know exactly what to do when an alert is issued,” he said. “In our project in Bandung, we’re finding a similar unwillingness to prepare for something that seems unlikely.”