The real estate agent from Utah indulged in a triathlon training program that at times was straight out of a couch potato’s handbook.

All the beer, pizza (cheese mostly) and heavy cream he could consume.

Rob Lea needed that not-so-routine diet to gain a little extra weight for his not-so-ordinary sort of climb, swim and bike endeavor he called “The Ultimate World Triathlon.”

Lea scaled Mount Everest through whipping wind, swam in the frigid waters of the English Channel while enduring constant jellyfish stings and rode his bike, through painful saddle sores, from one American coast to the other.

All in six months, too. He started on April 25 as he acclimated at Everest base camp and finished on Oct. 7 by holding his bike aloft while standing in the waves.

He did take a brief timeout in the middle — to get married.

“What a great adventure,” Lea said in a phone interview.

The concept struck him while sitting in a doctor’s office. Dealing with ankle pain, the physician recommended he give up running.

His mind wandered. A former swimmer at the University of California at Davis, he began to think about the English Channel.

Then, a random thought: Would the English Channel or Everest be more difficult? 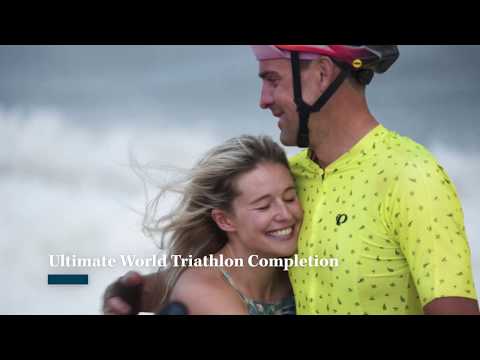 More thoughts: How about accomplishing both? Maybe a bike ride thrown in as well?

A plan was hatched.

Joining him on the expedition was professional ski mountaineer Caroline Gleich, who married Lea after the English Channel portion of the journey.

To train for Everest, the couple scaled Cho Oyu, which is one of the highest summits in the world. It’s also the spot where they took their relationship to an even higher plateau with Gleich proposing to him.

About two months before their Everest departure, though, Gleich tore the ACL in her left knee. She climbed Everest anyway.

Instead of trying to summit along the south side through Nepal (there was a viral photo of a traffic jam created by climbers waiting to ascend), they took a northern route. Despite all the wind gusts, they reached the summit on May 24 with the thermometer reading minus-35 degrees (minus-37 Celsius).

“I’m literally speechless and trying to find the words on what it all means,” Lea wrote on Instagram. “Guess it’s time to start thinking about swimming the English Channel.”

After arriving back in Utah, Gleich had surgery to fix her knee while Lea started his training regimen for the swim.

That meant gaining 30 pounds for insulation in the cold water. He ordered pizza from a local joint place in Park City that sponsored him. He drank Fat Tire amber ale courtesy of N ew Belgium Brewing. And he used plenty of heavy cream in his coffee.

“I was eating slices of pizza in bed,” said Lea, who didn’t swim much because he couldn’t afford to burn off the calories. “I was eating even when I was full.”

The 38-year-old flew to England and started his English Channel trek on July 9 from Samphire Hoe at approximately 4:33 p.m. local time. No wetsuit could be worn (rules) so he donned a Speedo.

What helped early on were the jellyfish bites.

Sure, they stung, but they also provided an adrenaline rush. At one point, he went through a bloom of jellyfish. Now that didn’t feel so good. He got stung about 50 times.

Gleich offered constant support from the boat (no contact is allowed). Every 30 minutes or so she provided food and water. She also documented every swim stroke of the journey.

It took less than 12 hours. He envisioned much longer.

Wanna see what it looks like to take a jelly fish to the face?? ⁣ ⁣ The channel was a roller coaster of mental and physical challenges. One such challenge was getting stung by over 50 jelly fish. Some hurt more than other, but two direct blows to the face were the worst. This one was a compass jelly fish and I’ve still got some recovering “burns” on my face from the tentacles. ⁣ ⁣ On the bright side, they gave me an adrenaline shot about 4 hours into the swim and gave me something else to think about for a while. And they’re really beautiful to look at in the middle of the night, 10 hours into a swim. 🎥: @carolinegleich

“Reaching out and touching the sand on the French shoreline was a moment of joy, relief, confusion and elation,” he wrote on Instagram.

Back to Utah. More training awaited.

First, though, their wedding — on Aug. 10 at the top of Snowbird Resort.

One slight hiccup: There was a massive rain storm leading up to their site and the road was closed due to a mud slide.

About 30 minutes before the wedding, the path reopened.

“Just like in our adventures, there were obstacles thrown at us and we had to make contingency plans,” he wrote on Instagram. “There were moments of distress and worry, but Caroline stayed calm and dealt with the adversity extremely well.”

No time for a honeymoon, though. A bike ride awaited. He began on Aug. 30 from Anacortes, Washington, and got a flat tire right away.

Gleich followed along in a support vehicle (Lea’s mom took over when Gleich had to go back to work). They stayed in motels at night, where they planned out the next day’s ride.

We went for the North Col today (23,000 ft). We didn’t quite make it. But for every foot below the the col, we experienced one of these gales where you’d just hang on for dear life. It was exciting, interesting and brutal. It’s so nice to be back in the comfort of advanced base camp. Although, it’s a little unnerving when you’re sitting in your tent and you literally think you here a freight train coming. Within 20 seconds the wind hits your tent and you’re hoping the tent was made well enough 😬. There were a number of tents lost in camp today. Our team made off pretty well, but it’s still concerning when you wake up at 3am to the freight train coming your way. @alpenglowexpeditions #everest2019 #climbforequality

“The bike ride crushed me,” Lea said. “Every time I had a good day, the next day was super hard.”

On Oct. 7 — day No. 39 — he reached his destination of Nantucket, Massachusetts. Standing in the water, he held his pink Specialized bike over his head to celebrate. Later, he cracked open a beer.

“I’m sort of speechless,” he wrote on Instagram. “I’m overjoyed and kind of emotional.”

Celebrating just as much that day was Gleich.

Through this endeavor, they wanted to raise awareness for gender equality. It’s bothered Lea that he’d be out skiing with Gleich and everyone assumed he was the guide and not her.

“Rob doing his alternate world triathlon isn’t going to directly change the world,” Gleich said. “Riding your bike, swimming and climbing mountains, they have just a really amazing power to bring people together. It’s a great starting point to talk about bigger issues.”

Lea’s already mulling over another adventure. Perhaps ski the largest mountain in Antarctica with Gleich?

Exactly a week ago, I was waiting at the bottom of Little Cottonwood waiting for them to open the road after landslides took out sections of the road the evening before. I’ve waited in that line before after avalanches in the winter, but this was extremely rare to be waiting in the summer. I wasn’t waiting because I was in search of some of Utah’s famous powder. This time was special, I was trying to get to my wedding!! ⁣⁣ ⁣ It was a nerve racking 24 hours to find out if all the planning was going to come together and I was going to be able to marry my best friend, @carolinegleich. That road did open and I had the most amazing weekend I could ever imagine with Caroline and my friends and family. ⁣⁣ ⁣ I can’t tell you how much I look forward to my life with Caroline! But I also want to acknowledge how much time and energy she put into making our wedding all that I could have imagined and more. Just like in our adventures, there were obstacles thrown at us and we had to make contingency plans. There were moments of distress and worry, but Caroline stay calm and dealt with the adversity extremely well. This is one of the many reason I’m so thrilled to spend my life with you, Caroline! Love you so much!⁣⁣ ⁣ Amazing photo by the talented @erinorthcutt⁣

It’s a thought for later.