The judge issued the order Friday just hours after the NAACP, the American Civil Liberties Union and other groups filed a lawsuit over actions taken by police during a June 2 protest over the death of George Floyd.

The restraining order prohibits police from boxing in or “kettling” peaceful protesters. It also requires police to give “clear, loud, continuous and provable orders of dispersal” before threatening to use chemical or other munitions.

A video of the June 2 incident that was posted online by the publisher of an alternative newspaper appeared to show officers using chemical agents on demonstrators who were boxed in by police. The publisher of the Queen City Nerve said police trapped protesters before pelting them with tear gas, rubber bullets and flash-bang grenades.

Police chief Kerr Putney said at the time there was nothing to indicate intentional abuse by police, but his department asked the State Bureau of Investigation to review the situation and determine whether the police actions were legal. 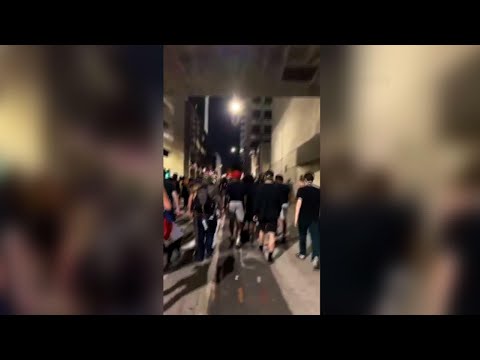 The SBI report, which was released by police Friday, states that a review of the Facebook Live footage for Queen City Nerve shows that there were two clear areas behind the protesters for escape.

Police told the SBI that the peaceful protest quickly turned into a riot after protesters started throwing rocks and bottles at police and damaging property.

According to the SBI report, police ordered demonstrators to disperse and began using riot-control agents about 23 minutes after police reported over the radio that bottles were being thrown at officers and that the crowd was “very large and hostile.”

Another dispersal order was given about half an hour later when police confronted a crowd several blocks away and began using riot-control agents.

The judge said in the restraining order that chemical agents, rubber bullets and other munitions may be used only if officers are faced with imminent threat of physical harm to themselves or others, or are responding to specific acts of violence or threats of violence against people that cannot be controlled by singling out and removing the perpetrators.

The police department said many of the restrictions referenced in the restraining order already are currently prohibited under departmental policy. Authorities also noted that police will be prohibited under the order from deploying riot-control agents against people who are destroying property.