CLINT, Texas (AP) — Migrant children being housed at a Border Patrol facility near El Paso appeared mostly clean and were being watched by hallway monitors on Wednesday, less than a week since they reported living there in squalid conditions with little care and inadequate food, water and sanitation.

U.S. officials opened the building to journalists, offering an inside glimpse of the station in Clint for the first time since lawyers who met with young migrants there told The Associated Press they saw 250 infants, children and teens locked up for up to 27 days in what was designed to be a short-term holding facility.

The tour came hours before immigrant advocates asked a federal judge to issue an emergency order requiring immediate inspections and access for doctors at border detention facilities like the one in Clint. The attorneys are also asking for the prompt release of children to parents and close relatives and for the government to be found in contempt of court.

The lawyers who visited the Clint facility described hearing about and seeing children taking care of children, and at least one sick 2-year-old boy without a diaper who had wet his pants, his shirt smeared in mucus. Those interviews contributed to the legal action brought late Wednesday in federal court. 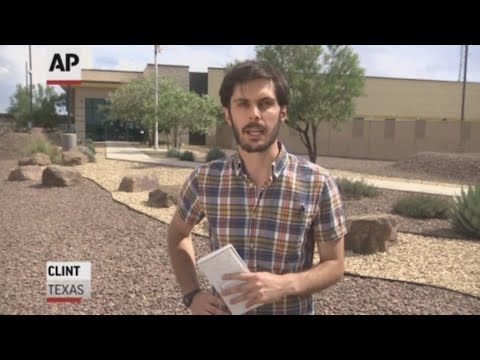 Journalists were given a tour of a Border Patrol facility in Texas after an Associated Press report highlighted the squalid conditions, inadequte food and sanitation issues inside. (

A pediatrician visited with 39 detainees at another Border Patrol center in McAllen, Texas, all but one of them minors, and performed medical exams on 21 infants and children on June 15. In her declaration with the court, she described the conditions there as dire, and said many of the detainees were teen mothers.

“The conditions within which they are held could be compared to torture facilities,” said Dr. Dolly Lucio Sevier. “That is, extreme cold temperatures, lights on 24 hours a day, no adequate access to medical care, basic sanitation, water, or adequate food.”

Sevier said no child should be held in the facilities even for the minimum of 72 hours “because it is obvious that the dignity and well-being of children is not even an afterthought in the design of the center.”

On Wednesday, the situation in Clint seemed to have improved: children appeared to be wearing clean clothes, and at least a half dozen hallway monitors were brought in to help watch the 117 children being housed there — less than half the number of young migrants who were crammed into the facility last week.

The children were housed in an industrial garage filled with bunk beds, or in cells with bunk beds and cots that included a bathroom area separated by a cinder block partition. The doors were left unlocked and the kids were free to move around.

“Not ideal, but what we had to do,” Matt Harris, the Border Patrol agent in charge of the facility, said about adapting the space that was originally designed to hold adults.

The building still doesn’t have a proper kitchen, and the only warm meals were ones that could be cooked in a microwave. Journalists touring the building saw stacks of instant oatmeal and instant noodles. Officials said the children also were being served burritos, and had unlimited access to snacks.

Mostly, the children sat together in the cells, singing songs, talking and at least in one instance, braiding each other’s hair. In the garage, a group of boys kicked around a soccer ball.

The bleak portrait about the conditions in Clint on Thursday prompted an outcry, and the acting head of U.S. Customs and Border Protection stepped down this week.

Customs officials denied allegations that the children weren’t given enough food or clothing, and the tour came as the Trump administration faces growing calls to provide more access to journalists, doctors and court observers.

U.S. agencies have been scrambling to find adequate facilities for migrants streaming across the border with Mexico, and the Border Patrol has been detaining some children for weeks as opposed to the court mandated 72 hours, because the U.S. Department Health and Human Services said it doesn’t have the capacity to take them.

Harris said children have been staying at the Clint facility an average of 6 to 10 days, and in some instances for as long as 30 days. And the facility, which was originally designed to hold a little over 100 people, at one point this year was housing 700 children, he added.

“This is not a detention center. It’s a holding area,” said Aaron Hull, chief of the El Paso Border Patrol sector, which encompasses all of New Mexico and parts of West Texas. He added that the Border Patrol is not built, staffed or funded to handle longer-term stays.

Last year, Border Patrol spent a little more than $1,000 a day on supplies for migrants being held across the El Paso sector, Hull said. This year, because of the ballooning number of migrants and the backlog, the agency is spending $4,000 a day just to buy enough food, medicines and other supplies to keep the Clint facility operating. Across the El Paso sector, the cost has risen to $61,000 a day.

Health and Human Services said it has been clearing mold from a facility in South Texas that will soon house up to 1,300 migrant children.

The agency said it was working quickly to open the facility at Carrizo Springs, which used to be a camp for oilfield workers. In addition to removing mold spots, agency spokeswoman Evelyn Stauffer said it also needs air conditioning and pipeline work.

Marsha Griffin, a pediatrician who visited children at two other Texas facilities this week, said that while the conditions were not as dire as what had been described in Clint last week, there needs to be better access to such facilities.

“You have to go through a long process to get in,” said Griffin, who is co-chair of the American Academy of Pediatrics Immigrant Health Special Interest Group.

In an interview last week, acting Commissioner John Sanders blamed the problems in detention on a lack of money and called on Congress to pass an emergency funding bill to address the crisis. The House and the Senate have since approved two separate bills providing funding, and congressional leaders hope to send President Donald Trump a compromise measure before lawmakers leave town for July 4 recess.

Nomaan Merchant in Houston, Texas, contributed to this story.