HOLDERNESS, N.H. (AP) — Modern refrigerators have little appeal for summer guests at a rustic New Hampshire resort who prefer cooling their bottles of water, soda and beer the old-fashioned way.

The preparation begins five months ahead of time, when resort staffers and volunteers gather to harvest ice from nearby Squam Lake. The January ritual dates back to 1897, when Rockywold-Deephaven Camps first opened in the town of Holderness, and is practiced for commercial purposes only at a handful of other places in the country.

The group, equipped with chain saws, ice picks and a huge saw on a sled, can harvest 200 tons of ice over several days in a typical winter. They transport the ice to two storage sheds on the campgrounds, where it’s kept until the summer. Then, staffers with wheelbarrows provide the ice to resort guests, who place it in an antique icebox — some dating back to the 1930s with oak exteriors and a tin or zinc lining — to keep beverages and snacks cold. Guests are told not to eat the ice, though some old-timers apparently still put a few shards in their cocktails. 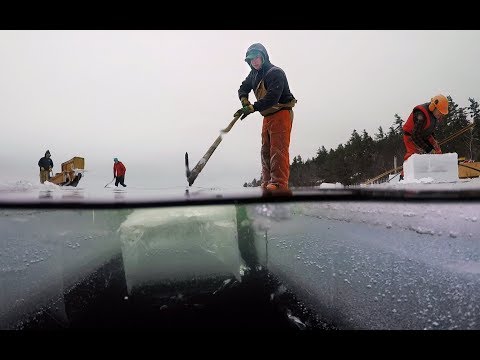 “Many of the families have been coming for generations, and people who come here don’t like to see much change. They like it to be a simple, quiet place,” said John Jurczynski, the co-general manager of Rockywold-Deephaven Camps for the past 29 years and who oversees the ice harvest. A push to bring in electrical refrigerators in the 1960s was rebuffed by guests.

“It’s such a neat tradition. People love it,” he said.

For weeks, Jurczynski had been putting out bulletins about ice conditions on Squam Lake. By mid-January, the word went out. The ice had finally reached a safe thickness — in this case about 13 inches — and the harvest could begin.

Once they cleared the snow and charted a grid, the cutting started and whining sounds of saws echoed across the lake.

Workers mostly use a contraption called an ice saw — with a huge blade mounted on a sled — to make the cuts. The 16-inch-by-19-inch chunks weighing as much as 120 pounds look like huge pieces of cake with a powdery top and a clear body with bubbles. The blocks are pried loose with the help of chain saws and a line of workers with ice pikes float them along a chute. They are then pushed up a ramp and into a truck for a trip to the storage facilities.

When it’s all done, the group collects as many as 3,600 blocks of ice.

“Obviously spending this time and energy, we wouldn’t have to do it. We could buy blocks of ice,” said Jane Kellogg, a retired teacher on the ice whose father came to the resort as a boy and who used to bring her elementary school students out here to watch the harvest.

“But there is something about the pride this place has in still being the place that maintains that culture, that tradition,” she said.

Jon Spence, a resort maintenance worker loading the ice onto the truck, said he prepares for the event each year by watching old movies and videos of ice harvesting. He found a top hat to wear for the occasion but wasn’t able to track down the long coats that were popular among harvesters back in the day.

“I love the icing. One of the reasons I’ve worked here so long is the icing,” Spence said. “Whenever anyone asked what I do for a living, I say I am a commercial ice harvester. They don’t know what that is. Most people don’t get it. Most people think we are ice fishing out here.”

Ice harvesting got its start back in 1805 when Frederic Tudor, who lived outside Boston, came up with the idea of “selling cold” and shipping ice around the world, according to Dennis Picard, a retired Massachusetts museum director who is considered an expert on ice harvesting. At its peak, the ice was being shipped as far away as Asia and the venture made Tudor a millionaire, Picard said. Tens of thousands were employed in the industry, mostly in the Northeast and Midwest, he said.

But as gas-powered and electric refrigerators for the home became popular after World War I, replacing old-fashioned iceboxes, ice harvesting declined. These days, only a few outfits in North America harvest ice for commercial purposes. Wine Lake Camp in Ontario does it, as do several places in Wisconsin, Montana and Maine. In the Maine town of South Bristol, the ice is sold commercially and used to produce ice cream for an annual ice cream social in July.

At Rockywold-Deephaven, which is open to guests from June through mid-September, the harvest has not only survived the advances of electricity but also — at least so far — the effects of climate change. There has never been a harvest missed in the past 122 years, though several times they had to move it to another location on the lake because that spot freezes over faster.

And with newcomers like 23-year-old Jack Sengstaken lending a hand, it might just carry on for years to come.

“It’s just really cool to be part of a tradition that has been going on for so long,” said Sengstaken who grew up on the lake and whose relatives helped found the nearby town of Sandwich. “You can kind of go back in time a bit.”