Taliban hopeful on deal amid new round of talks with US

DOHA, Qatar (AP) — The Taliban and Washington’s peace envoy are close to reaching an agreement on U.S. troop withdrawal from Afghanistan, a spokesman for the Islamic insurgents said Tuesday amid a new round of talks with the United States.

Suhail Shaheen, the spokesman, said the deal will also include guarantees that Afghanistan will not be used again as a staging arena for anti-American attacks.

His remarks came during the second day of talks in the Qatari capital of Doha with U.S. envoy Zalmay Khalilzad who has been trying to negotiate a resolution of the 17-year war in Afghanistan, America’s longest.

He said the sides in the talks are for now sticking to the two-point agenda: U.S. withdrawal and no-attacks guarantees.

The Taliban, who refuse to talk with the government in Kabul and describe it as a U.S. puppet, have long demanded direct talks with the United States but until Khalilzad’s appointment last September, Washington had shied away from opening face-to-face negotiations.

Khalilzad arrived Monday for the talks in Doha and tweeted that that this could be “a significant moment” in the process. 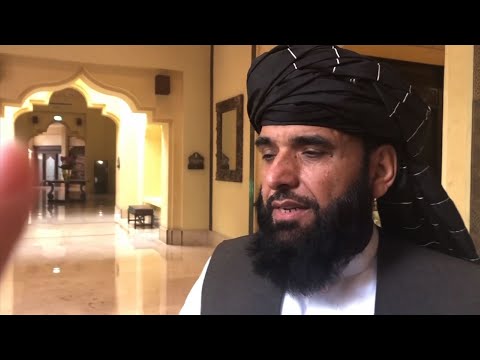 Khalilzad’s past rounds of talks with the Taliban focused on American troop withdrawal in exchange for guarantees of no attacks against the U.S. but it was unclear how close he was on a deal on those issues. He has also been expected to pressure the Taliban to hold direct talks with the Kabul government.

The Taliban, who had harbored al-Qaida and its leader Osama bin Laden, ruled Afghanistan before U.S. forces invaded in October 2001, following the 9/11 attacks. The Taliban have made a major comeback in recent years, and today carry out near-daily attacks on Afghan security forces.

That has made a peace process even more pressing. President Donald Trump has expressed frustration at the protracted conflict.

Shaheen did not say how the Taliban — and their main ally, the Haqqani network — could guarantee that Afghanistan would not again harbor terror suspects. Bin Laden’s successor in al-Qaida, Ayman al Zawahri, is believed to be hiding in Afghanistan.

Scores of other militants from Arab countries, including Yemen and Saudi Arabia, are also believed to be living in Afghanistan, aligned with Taliban insurgents, the Islamic State group, which has suffered major defeats in Iraq and Syria, or other factions.

Khalilzad previously said Washington would demand verifiable guarantees from the Taliban, stressing that promises alone would not be sufficient but without elaborating.

The presence at the Doha talks of Mullah Abdul Ghani Baradar, a co-founder of the Taliban, is considered significant because of his stature within the movement. Baradar was released in October from a Pakistani jail where he had languished since being a joint Pakistan-CIA operation in 2010.

Describing Baradar’s presence as “very important,” Shaheen said it was a reflection of “how much importance we are giving to these talks and how (great our) expectations” are.

Shaheen said the persistent Taliban refusal to hold talks with the Afghan government was an “internal” affair, giving no indication the insurgents could relent on that issue.

Karzai later told the AP he thinks the Taliban are ready to talk to the government but initially only as part of a larger gathering of all Afghan players.