ATLANTA (AP) — A college student dragged from a car by Atlanta police when she and her boyfriend were caught in traffic caused by a protest over the death of George Floyd said she feared the officers would kill them.

“I still can’t even process what happened,” Taniyah Pilgrim said at a news conference Monday. “We felt like we were going to die in that car.”

Dramatic body-camera video released by police shows a group of officers shouting orders, smashing the driver’s side window, deploying stun guns and pulling Pilgrim and Messiah Young from the sedan. Throughout, the couple can be heard screaming and asking officers what is happening.

Mayor Keisha Lance Bottoms said at a news conference Sunday after reviewing body camera footage that she and police Chief Erika Shields decided to immediately fire two of the officers involved and place three others on desk duty pending investigation.

Police identified the fired officers as Investigator Ivory Streeter, who was hired in December 2003, and Investigator Mark Gardner, hired in August 1997.

Fulton County District Attorney Paul Howard said in a statement Monday that his office is in contact with Shields and is “moving rapidly to reach an appropriate charging decision.” 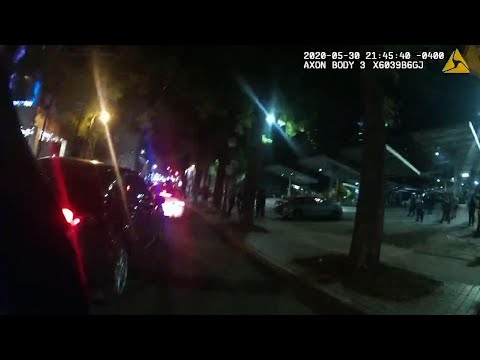 Young, 22, of Chicago, is a rising senior at Morehouse, where he’s studying business management. Pilgrim, 20 — from San Antonio, Texas — is a psychology major at Spelman College. Both schools are historically black colleges near downtown Atlanta.

Young suffered a fractured arm and required 20 stitches. He said the arrest was “one of the hardest things that I’ve ever experienced in my life.”

The two were out getting something to eat Saturday night when they got snarled in traffic along Centennial Olympic Park in downtown Atlanta, their lawyers said. A friend of theirs, another Morehouse student, was standing in the street talking to them while they were stopped when police began to take him into custody, Young’s lawyer Mawuli Davis said.

Young used his phone to film what was happening and that’s when officers turned on him, Davis said, adding he believes the officers’ motivation was to keep his client from capturing what was going on.

Police on Sunday released video from seven officers’ body cameras. It shows the officers taking the other young man into custody as he pleads with them to let him go, saying he didn’t do anything.

Young, behind the wheel of a car stopped in the street, is holding his phone up as an officer approaches and pulls his door open. Young pulls it shut and says repeatedly, “I’m not dying today.” He tells officers the other man is with them and urges them to release his friend and let him get in the car.

The car advances and gets stuck in traffic as officers run up to both sides, shouting orders. An officer uses a stun gun on Pilgrim as she’s trying to get out, and officers pull her from the car.

Another officer yells at Young to put the car in park and open the window. An officer repeatedly hits the driver’s side window with a baton, and another finally manages to break it. Officers also slashed the tires, the lawyers said.

Police reports do not list a gun as having been recovered. Davis said Young has never been arrested and there was no gun or drugs in the car.

“There is no justification, none whatsoever, for what they did to them and for what the system did to them,” Davis said, later adding, “If there was a gun, best believe this would have had a very different outcome.”

In incident reports, Streeter wrote that he used his “electronic conductive weapon” on the driver and Gardner wrote that he deployed his Taser “to bring the female passenger under control.”

Bottoms said Pilgrim was released without charges. She said Young was released, too, and she’s ordering charges against him dropped. A police report says he was charged with attempting to elude police and driving with a suspended license.

Davis said criminal defense attorney Gary Spencer is working pro bono to make sure Young’s charges are dropped and to get the arrest wiped from his record so it doesn’t cause him problems later in life.

“We want change in policies, in procedures, in laws,” Stewart said. “It’s not hard to fix.”

Training records from the Peace Officer Standards and Training Council, which certifies law enforcement officers in Georgia, show that Streeter and Gardner recently completed training in use of force and in deescalation tactics.