CEDAR RAPIDS, Iowa (AP) — Former Vice President Joe Biden bemoaned the tone of Trump-era politics at a campaign stop in Iowa on Tuesday, previewing on his first trip to the leadoff caucus state how he might take on the Republican president should he seek the 2020 Democratic presidential nomination.

“It’s our leaders who need to set the tone and dial down the temperature and restore some dignity to our national dialogue,” Biden said in Cedar Rapids while stumping for Iowa’s Democratic gubernatorial candidate and a House candidate from northeast Iowa.

Biden was on a trip across the Midwest campaigning for Democrats in states that President Donald Trump carried in 2016. But the Iowa stop had special significance as Biden weighs a third bid for the presidency. Other rising national Democrats eyeing 2020 have visited the early testing ground in recent weeks.

Biden entered the hall to cheers from the crowd of more than 1,000.

“Hello, Iowa. Hello, Cedar Rapids. It’s been a long time,” said Biden, a former Delaware senator who has been making trips to Iowa since his early campaign for the 1988 Democratic nomination. 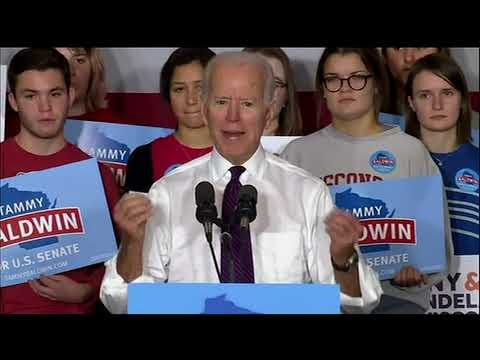 Biden quickly pivoted from pleasantries to attacking Trump’s moral leadership, indirectly charging him with accommodating intolerance as president. He said moral leadership was particularly important after the slayings of 11 people on Saturday at a Pittsburgh synagogue, the deadliest anti-Semitic attack in U.S. history.

Biden also noted the two African-Americans shot dead at a Kentucky grocery store and the wave of pipe bombs addressed to prominent Trump critics, including Biden himself.

“Three times this past week the forces of hate have terrorized our fellow Americans for their political beliefs, the color of their skin or their religion,” Biden noted.

“What the hell is happening to us?” Biden thundered. “Our children are listening!”

“In one sense, I feel he could unite the country because everybody loves Joe,” Charipar said. “But I also feel we need a change.”

Biden began the day in Wisconsin campaigning for Democratic Sen. Tammy Baldwin and Democratic gubernatorial candidate Tony Evers, who is trying to unseat Republican Gov. Scott Walker. He was in Ohio on Monday and was scheduled to campaign in Missouri on Wednesday. Both have competitive Senate races.

“If I had to say what I want in the next president, it’s personal integrity, character and a moral compass,” said longtime Biden supporter Teri Goodman of Dubuque, Iowa. “Does Joe Biden fit many of those? He does, in my opinion.”

For months, he has been an unsparing critic of Trump’s moral leadership. Campaigning in Nevada this month, he said American values are “being shredded by a president who is all about himself.”

But Biden’s criticism has taken on a new resonance following the synagogue shootings.

“Hate is on the march in America,” he said Saturday.

Trump, who struggled at first to condemn the white supremacists who clashed with protesters in Charlottesville, Virginia, last year in a deadly confrontation, immediately condemned the synagogue shooting as an “evil, anti-Semitic attack.”

The president visited Pittsburgh on Tuesday to offer his condolences and meet with some of the survivors of the attack.