BATON ROUGE, La. (AP) — As Louisiana’s coronavirus outbreak exceeded 10,000 confirmed cases Friday, the state’s hospitals and health care workers worry if they’ll have enough people and equipment to meet the ever-growing demands of an epidemic expected to start overwhelming some medical facilities within a week.

Gov. John Bel Edwards released New Orleans regional modeling that showed even as many people are following his stay-home order, the rate of strict compliance remains too low to keep from daily surges in new hospitalizations that will strain the state’s ability to care for all patients.

“Where we are right now is somewhere between the worst-case scenario and the best-case scenario,” the Democratic governor said. “To the degree that people comply with the orders, then less people are going to die. It is literally that simple.”

In Baton Rouge, nurse Christen Hyde has been treating patients infected with the virus at Our Lady of the Lake Regional Medical Center, which is rapidly standing up more COVID-19 units. The number of cases shows no sign of slowing down. The hospital has gone from one unit dedicated to coronavirus patients to seven, Hyde said. 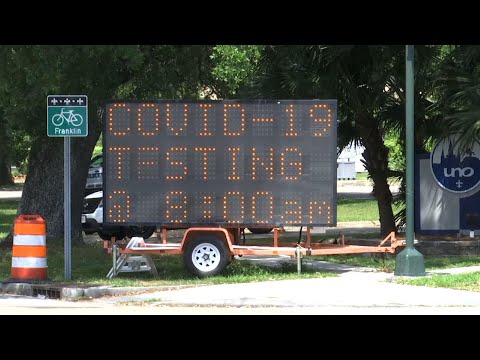 Nearly 10,300 people have tested positive for the COVID-19 disease caused by the virus, according to figures released Friday by Louisiana’s health department. The state has the nation’s third-highest rate of coronavirus infections per capita, authorities say. About 17% of Louisiana residents confirmed to have the virus are hospitalized, the data shows.

Friday brought another jump in Louisiana’s death toll from the coronavirus. The state said 370 virus-related deaths were confirmed, an increase of 60 from a day earlier.

Edwards has warned the hard-hit New Orleans region is projected to run out of ventilators by as early as Tuesday and hospital beds five days later.

Dr. David Becnel, a pulmonary critical care doctor at the Tulane University School of Medicine, sees patients at three New Orleans-area hospitals and said all are trying to get more ventilators as supplies shrink. Hospitals are looking at using one ventilator for more than one person or retrofitting other breathing devices into ventilators, in case that’s needed.

“I think everybody is concerned about running out of resources,” he said.

For most people, the coronavirus causes mild or moderate symptoms, such as fever and cough. But for others, especially older adults and people with existing health problems, the highly contagious virus can cause severe symptoms and be fatal. Edwards has ordered schools closed, limited restaurants to takeout and delivery and shuttered businesses deemed nonessential like gyms, hair salons and bars through the end of April in hopes of lessening the state’s outbreak.

While a great deal of attention has been paid on the number of elderly patients stricken by the disease, Hyde said most of the patients she’s seen have been younger, 30- to 50-years-old.

“With these people it’s so sudden and unexpected and they have so much of their life left to live,” she said. “This disease, it’s such a rapid, progressing disease. ... In days they’re passing. It’s horrible. It’s absolutely horrible.”

Testing resources remain strained, giving only a limited idea of the virus’s footprint in Louisiana. But testing capacity continues to grow, and a backlog of results from commercial labs, hospitals and small testing sites are pouring into state authorities for confirmation.

At Tulane’s medical school, employees are processing coronavirus tests in the school’s molecular pathology lab, which was converted from a research lab in recent days.

“It’s clear that communities and countries that have dealt as well as they could with this challenge have had a greater capacity to test than many areas,” said Patrick Delafontaine, executive dean of Tulane University’s School of Medicine.

Despite Edwards’ limit on public gatherings, New Orleans Police Superintendent Sean Ferguson said the department has responded to more than 800 calls regarding gatherings of people in just over a week.

Edwards repeated his calls for Louisiana residents to stay home as much as possible: “It’s going to get worse before it gets better. But we have the power to determine how much worse it’s going to get.”