Pence a voice of calm on virus -- balancing health, politics

It was a rare outward display of emotion for a man who stands stoically behind President Donald Trump during his often-rambling daily press briefings. He speaks when Trump directs him to and delivers solicitous affirmations of the Republican president, but also offers frequent displays of empathy, whether it be words of comfort for mourners or support for graduates marking a milestone without their families.

Pence told the graduates they would “inspire confidence that we will prevail against the invisible enemy.”

In many ways, it is a job that he has subtly taken on, trying to instill confidence in the nation as it confronts the pandemic and even as the president careens from optimism to anger.

Every vice president walks in a president’s shadow, and the one Trump casts is larger than most. Trump tapped Pence to chair his coronavirus task force, but has not ceded the stage to his No. 2.

At times, Pence has found himself struggling to square scientific guidance with a message that will please the president. He has attempted to limit his role to sober presentations of facts and best public health practices, often waving a flyer on the social distancing recommendations. 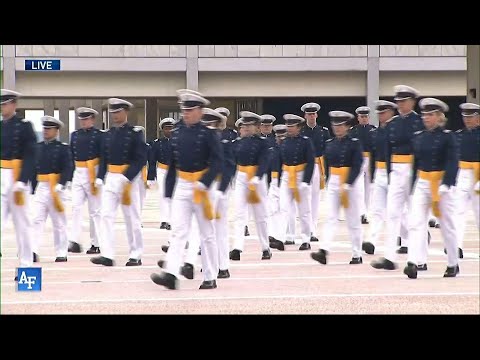 “I don’t mind controversy. I think controversy is a good thing, not a bad thing,” Trump said at a recent briefing. On Monday, he drew a contrast with Pence.

“Mike doesn’t like to get into this stuff,” Trump said as he launched into criticism of Maryland Republican Gov. Larry Hogan. “He’s less controversial than I am.”

Pence was at Trump’s side on Thursday when the president tossed out the far-fetched idea of injecting disinfectant to fight the coronavirus and made no comment on the notion, which public health officials called dangerous.

Vice presidents often hold dueling political ambitions, in service of the president’s, but also of their own. Pence keenly knows his actions will not only help define Trump’s reelection chances in 2020, but also his own prospects for a promotion in 2024.

That has created some awkward moments.

Pence has put his credibility on the line to back up the president, most significantly as he offered what proved to be overly rosy estimations of the country’s ability to conduct testing.

On March 9, Pence pledged: “Before the end of this week, another 4 million tests will be distributed.” Only last weekend did the nation hit the 4 million mark for tests performed.

Pence’s trip to the Air Force Academy in Colorado last weekend was a symbolic nod to returning to normalcy. He traveled Tuesday to a General Electric plant in Wisconsin and is scheduled to visit a General Motors plant in Indiana next week.

In recent days, Pence oversaw the release of federal guidelines on how states can ease restrictions meant to slow the virus’s spread. He and federal medical experts insist there are enough COVID-19 tests available to begin the first stage of the reopening effort, though there are documented shortages nationwide.

Now, aides are hopeful Pence is closing the book on the darkest days of the outbreak.

“Now that we’ve flattened the curve,” says Katie Miller, the vice president’s spokeswoman, “it’s talking about the stories of American ingenuity and how we all came together.”

The vice president had little idea of what he was in for when Trump tapped him in late February to lead the federal government’s response to the coronavirus. At that point, there were just 15 reported cases in the U.S.

His selection sparked an outcry from Democrats, who pointed to Pence’s past comments questioning scientific evidence on smoking and climate change and who faulted his handling of an HIV outbreak in Indiana when he was governor.

Aides initially thought Pence would be able to supplement a steady calendar of political events with public health efforts. Instead, Pence was forced to cancel political appearances in the upper Midwestern states where the Trump campaign believed him to be most useful in the reelection effort.

Still, Pence was quicker than others inside the White House to recognize the medical and political threats posed by the virus. He transformed a task force that many in the administration viewed as a bureaucratic muddle into a decision-making body and enlisted Surgeon General Jerome Adams and FDA Commissioner Stephen Hahn.

As some in the White House pushed last month for a swift reopening after Trump’s initial 15-day period of social distancing, Pence helped medical experts convince the president that 30 more days were warranted.

At the same time, Pence has bowed to Trump on messages at odds with public health guidance and his own long-held views.

When Trump continued to shake hands in contravention of health guidelines the vice president was pushing, Pence folded.

And last week, when Trump declared he had absolute power to decide when governors should reopen their states, Pence, a lifelong defender of states’ rights, backed him up.

“In the long history of this country, the authority of the president of the United States during national emergencies is unquestionably plenary,” Pence said.

Pence has largely drawn praise from governors and members of Congress for his outreach. But a call last week with Democratic senators grew heated when Pence insisted that states had enough testing capacity to reopen.

“I have never been so mad about a phone call in my life,” Maine Sen. Angus King, an independent who caucuses with Democrats, told Pence during the conversation. Pence aides said he was merely echoing comments by health officials.

Ever the loyal soldier, Pence has given Trump credit for his every action. Less frequently, Trump sends some back.

“Mike Pence has been working day and night on this,” Trump said earlier this month. “He’s got to get a little more sleep than he’s getting. He hasn’t been getting very much, I will tell you that.”