ATLANTA (AP) — The Latest on the race for governor in Georgia (all times local):

A judge in Dougherty County has ordered the county to accept absentee ballots postmarked by Election Day and received by Friday.

The ruling was a result of a lawsuit filed by the Democratic Party of Georgia.

Abrams for Governor campaign chairwoman Allegra Lawrence-Hardy says the campaign will continue to take legal action as necessary until every eligible vote is counted.

The campaign filed a complaint in federal court asking for an injunction to direct the board of elections to count any absentee ballots received between 7 p.m. on Election Day and close of business Friday, which is consistent with the way that counting overseas military and overseas citizens’ ballots is handled.

Unofficial returns from Tuesday’s midterm election show Republican Brian Kemp with 50.3 percent of the vote. That’s a lead that would make him the victor without a runoff. 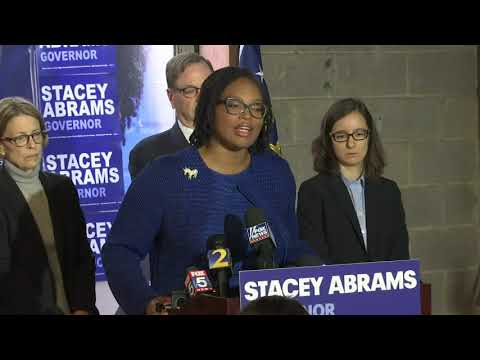 A populous, majority-black county in metro Atlanta says its elections office will remain open past normal hours Friday to accommodate provisional voters who needed to provide identification so their votes can be counted.

DeKalb County has about 750,000 residents and could help Democrat Stacey Abrams close the gap on Republican Brian Kemp in Georgia’s gubernatorial race.

But two groups supporting Abrams’ call to count all votes, ProGeorgia and Care in Action, say at least 12 other counties certified election results before Friday. Such a move could leave provisional ballots uncounted.

The secretary of state’s office did not immediately respond to an email seeking comment.

Democrat Stacey Abrams’ campaign for Georgia governor has reserved television advertising time and started sending vote-by-mail information to its supporters in the event she forces a Dec. 4 runoff with Republican Brian Kemp.

Unofficial returns from Tuesday’s midterm election show Kemp with 50.3 percent of the vote. That’s a lead that would make him the victor without a runoff.

But Abrams’ campaign believes there could be enough uncounted votes to bring Kemp below the majority threshold and trigger a second round of voting.

Abrams’ voter turnout strategy depended heavily on absentee and early voting, and her campaign manager Laruen Groh-Wargo said there isn’t enough time to wait for more ballot counting and litigation if they have to replicate that effort.

In a frantic effort to make sure every possible vote is counted, dozens of volunteers on Friday converged on a warehouse-turned-phone bank on Atlanta’s east side.

Their goal: Try to reach voters who used a provisional ballot, then urge them to make sure their vote is counted by a 5 p.m. Friday deadline. County vote totals must then be certified by Tuesday evening.

State Sen. Nikema Williams, Georgia director for the group Care In Action, says at least 2,000 people across the nation are involved in the effort to ensure that Georgia votes are counted.

Williams says Atlanta is in the cradle of the Civil Rights movement and the home of U.S. Rep. John Lewis “who literally bled on the bridge at Selma to make sure that everybody had the right to vote.”

Trump tweeted Friday that Kemp “ran a great race in Georgia - he won. It is time to move on!”

Democratic nominee Stacey Abrams disagrees, maintaining that enough ballots remain uncounted to force a runoff. Her lawyers are exploring options to ensure all votes are counted.

The races for governor and U.S. Senate also are tight in Florida, something that Trump referred to in a tweet that said: “You mean they are just now finding votes in Florida and Georgia - but the Election was on Tuesday? Let’s blame the Russians and demand an immediate apology from President Putin!”

Trump’s message refers to allegations that Russian interference helped him win in 2016.

Outgoing Georgia Gov. Nathan Deal stood before a bank of cameras and welcomed into his office a man he recognized as his successor.

“The governor-elect,” Deal called Brian Kemp on Thursday, accepting his fellow Republican’s resignation as secretary of state and promising the two would begin work immediately on transition business ahead of a January transfer of power.

All of it would be a routine scene two days after an election — except that Kemp’s opponent, Democrat Stacey Abrams, maintains that enough ballots remain uncounted to force a runoff, and she’s dispatched her legal team to explore every option to see if she’s right.

“We won a clear and convincing victory,” Kemp said of returns showing him with 50.3 percent of almost 4 million votes, about a 63,000-vote lead over Abrams. That’s a narrow sum considering the near-presidential election year turnout, though sufficient for the majority required for outright victory.

The Associated Press has not called the governor’s race.

With legal wrangles opening and Abrams showing no signs of conceding, the dispute is prolonging a bitter contest with historical significance and national political repercussions. Abrams would become the first black woman elected governor of any U.S. state. Kemp seeks to maintain Republican dominance in a growing, diversifying Deep South state positioned to become a presidential battleground.

The key question is how many uncounted ballots actually remain.

Kemp said on Thursday morning that it’s fewer than 21,000 — almost certainly not enough to force a runoff. The elections chief from the secretary of state’s office — which Kemp ran until noon Thursday — said in an afternoon federal court hearing that the number is 21,190.

“Even if she got 100 percent of those votes, we still win,” Kemp said.

Abrams’ campaign argues the total could be higher, and the secretary of state’s office has shared scant details as officials in Georgia’s 159 counties keep counting.

John Chandler, one of several attorneys for Abrams, promised to “litigate until we have determined that every person’s vote has been counted.”

County authorities must certify final returns by Tuesday. The state must certify a statewide result by Nov. 20. Deal appointed one of his Cabinet members to oversee the process in Kemp’s place.

One of the lawsuits heard Thursday in federal court requested Kemp be barred from overseeing the rest of the certification procedure — a request pre-empted by Kemp’s resignation.

Abrams, other Democrats — including former President Jimmy Carter — and voting-rights activists had for months called for Kemp to step down amid charges he was abusing his office to make it harder for some Georgians, particularly minorities, to vote.

Kemp said his resignation “will give confidence to the certification process.” He maintained he wasn’t bowing to pressure but preparing to be governor.

“That was all political,” Kemp said, dismissing the criticism. He said Tuesday’s turnout — about 1.4 million more than in Deal’s last election — proves it.

Leaders of Abrams’ campaign said they believe she needs to pick up about 25,000 votes to force a runoff.

She added that officials in suburban Atlanta’s Cobb County added several hundred votes to that count Thursday morning from absentee ballots. That came after the secretary of state’s office said all absentee and early ballots had been counted.

Abrams’ lawyers also said they plan to sue officials in Dougherty County because absentee ballots were delayed after Hurricane Michael devastated parts of south Georgia. Separately, the American Civil Liberties Union raised concerns over 1,200 absentee ballots in Gwinnett County, northeast of Atlanta, which it said were rejected because of missing birthdate information.

“Brian Kemp owes voters an explanation,” Groh-Wargo said, demanding to see lists and names. “We do not believe any of these numbers are credible.”

When Kemp’s campaign declared victory Wednesday, his aides cited a statewide estimate of uncounted ballots from the secretary of state’s office. But that office had not publicly offered a county-by-county breakdown to Abrams’ campaign or to the news media at that point.

The provisional vote total is considerably higher than in 2016, when a slightly larger electorate yielded 16,739 provisional ballots. Of those, 7,592 were counted.

State and campaign officials have said they expected a much higher proportion to be counted this year. In federal court Thursday, a secretary of state’s representative said the provisional count included at least some votes cast late at a handful of metro Atlanta precincts that courts ordered to stay open past Tuesday’s 7 p.m. poll closing time.