Tens of thousands in Ohio without power after twisters

DAYTON, Ohio (AP) — Tens of thousands of Ohio residents were without power or water Wednesday in the aftermath of strong tornadoes that spun through the Midwest.

Hospitals in the state reported that nearly 140 people were injured in the storms late Monday night, and one person was killed as the destructive storms sent people seeking shelter in basements, closets and bathrooms.

At least 60,000 people lacked water service in the Dayton area, where ice and water distribution centers were set up. A utility said power had been returned to some 35,000 customers Wednesday, but tens of thousands still were awaiting restoration.

More stormy weather was expected Wednesday in the region, with the chance for scattered strong thunderstorms.

Gov. Mike DeWine declared an emergency in three hard-hit counties, allowing the state to bypass purchasing requirements to speed up delivery of essentials like water and generators.

“We get our share,” DeWine told President Donald Trump on Tuesday, responding to the president’s remark in a personal call that he didn’t think of Ohio when he thought of tornadoes.

“Whatever we have to do, we’ll do,” Trump told the governor. “We’ll take good care of you.” 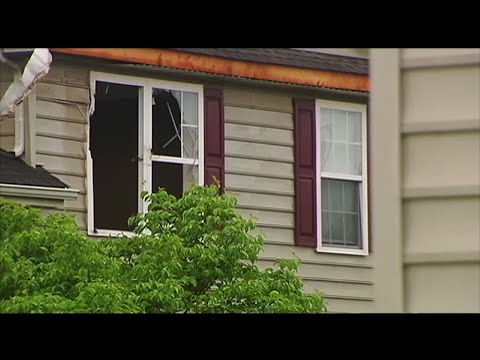 The Memorial Day storms were among 53 twisters that forecasters said may have touched down across eight states stretching eastward from Idaho and Colorado.

Southwestern Ohio hasn’t been nearly so lucky when tornadoes roared through in previous years. One of the most violent tornadoes ever recorded struck Xenia, Ohio, 15 miles (24 kilometers) east of Dayton, on April 3, 1974, killing 32 people and nearly wiping the city off the map. It was part of what meteorologists termed a Super Outbreak that spawned 148 tornadoes in 13 U.S. states and Ontario, Canada, in a 24-hour period.

Mike Harrington survived that 1974 storm, riding it out in a pitch black locker room at his high school where his track coach rushed athletes caught by the storm during practice.

On Monday, memories of that disaster came racing back as he stood outside his home near Dayton watching the lightning in the clouds and a cellphone alert told him to take cover immediately.

This time a twister roared through about 10 minutes from his house, one of at least three powerful storms that caused widespread damage in the Dayton area. At the church in Vandalia, where the now 63-year-old works as a multimedia specialist, the steeple was toppled and the building is so beat up that it may have to be torn down.

“It freaks me out to think I’m going to experience this again,” Harrington said Wednesday, standing outside New Life Worship Center. “I certainly don’t want to do that or have my wife go through that because it was something, it works on you emotionally.”

Associated Press writers Dan Sewell in Cincinnati and Andrew Welsh-Huggins in Columbus contributed to this report.