WASHINGTON (AP) — An exuberant President Donald Trump took a victory lap on Capitol Hill Tuesday, emboldened by the end of the special counsel’s Russia probe, even as Democrats pressed insistently for Robert Mueller’s full report and Justice Department officials said more information could be released in “weeks, not months.”

Trump strode into a high-spirited gathering of Senate Republicans, flanked by party leaders, saying the attorney general’s weekend summary of Mueller’s report “could not have been better.” GOP senators applauded his arrival, and he celebrated what he called his “clean bill of health.”

But challenges are ahead for both the Republicans and the Democrats who hope to deny Trump re-election next year. Both parties are readjusting their aims and strategies in the post-probe landscape, pivoting to health care and other issues that are more important for many voters, even with Mueller’s full findings still unknown.

At House Speaker Nancy Pelosi’s own closed-door caucus meeting Tuesday, she urged rank-and-file Democrats to “be calm” and focus on the policy promises of health care, jobs and oversight of the administration that helped propel them to the House majority last fall.

Not that the Democrats are forgetting Russia and the 2016 presidential election. Many Democrats dismiss the four-page summary released by Attorney General William Barr as inadequate. 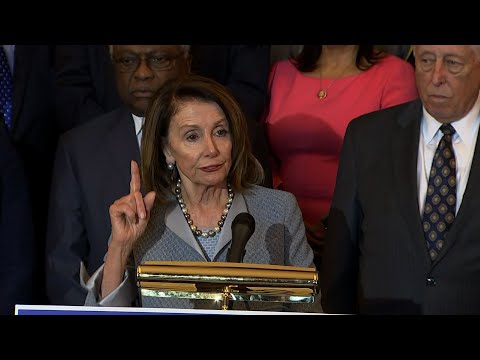 “The president is saying he’s been completely and totally exonerated by the report,” Raskin said. “The one sentence we’ve seen from the report says this is not an exoneration of the president.”

Meanwhile, a Justice Department official said it will take Barr “weeks, not months” to finish reviewing Mueller’s longer, still-confidential report and make a version available for the public. It’s not clear whether that will be Mueller’s own words or another synopsis.

Trump has said he “wouldn’t mind” if the full report were released. But Senate Majority Leader Mitch McConnell said he’s hesitant to agree to releasing information from Mueller that would “throw innocent people who’ve not been charged under the bus.” He is blocking legislation approved unanimously by the House calling for the report’s release.

In the GOP luncheon, Trump was in a lively mood, senators said. Kevin Cramer of North Dakota said the president is “always high energy. He had a little extra today.”

Russia report aside, the president showed an eagerness to move on. He told GOP senators that health care should be their focus heading into the 2020 election.

He said he wants them to abandon efforts to simply repeal “Obamacare” and instead focus on a replacement for President Barack Obama’s signature law.

“I was a little surprised he came out of the chute in health care,” said Sen. John Kennedy, R-La., after the meeting. “He wants us to try again.”

Even so, the White House was making a new effort to get rid of the Affordable Care Act entirely. In a legal filing late Monday, the administration said it would not defend the act against a court challenge — essentially encouraging the law’s demise.

Meanwhile, House Democrats, led by Pelosi, unveiled their own sweeping measure to rescue the program on Tuesday.

Trump’s hour-long talk to Senate Republicans touched on trade, foreign policy and a vote later in the day on Rep. Alexandria Ocasio-Cortez’s Green New Deal, which the Senate declined to take up. Trump said the climate-change proposal would be a good campaign issue to fight over with Democrats.

Almost no mention was made of the president’s national emergency declaration to expand the border wall with Mexico, even though the House was voting on an effort to block it as the senators lunched. Congress had voted to block Trump, and he had vetoed that action. House members voted 248-181 to override Trump’s veto, but that was well short of the needed two-thirds majority. Fourteen Republicans joined Democrats in trying to block the president from taking military funds to build his long-promised wall.

The president seemed to have heeded advice from allies, including Sen. Lindsey Graham of South Carolina, who encouraged him to use the political capital he’s now gained to accomplish policy goals.

Pelosi’s advice to Democrats to stick with the strategy that won them control of the House in 2018 was reinforced by Obama himself, who counseled freshman Democrats at a reception Monday night.

Obama advised the newly elected lawmakers to focus on constituents’ hopes and concerns, while also identifying issues they feel so strongly about that they’d be willing to lose their House seats in fights over them, according to people at the private party.

The focus must go beyond Russia and collusion, Democratic leaders said.

At the same time, Democrats will continue their investigations of the Trump-Russia connection, and other aspects of the president’s finances and business practices, including his tax returns.

“You can’t move forward on a four-page memo,” said Rep. Karen Bass of California. “It’s hard for me to accept that as an objective opinion.”

Six House Democratic committee chairmen have written to Barr asking to have Mueller’s full report by April 2. If not, they have suggested subpoenas could be issued.