TIJUANA, Mexico (AP) — More buses of exhausted people in a caravan of Central American asylum seekers reached the U.S. border Thursday as the city of Tijuana converted a municipal gymnasium into a temporary shelter and the migrants came to grips with the reality that they will be on the Mexican side of the frontier for an extended stay.

With U.S. border inspectors at the main crossing into San Diego processing only about 100 asylum claims a day, it could take weeks if not months to process the thousands in the caravan that departed from San Pedro Sula, Honduras, more than a month ago.

Tijuana’s robust network of shelters was already stretched to the limit, having squeezed in double their capacity or more as families slept on the floor on mats, forcing the city to open the gymnasium for up to 360 people Wednesday. A gated outdoor courtyard can accommodate hundreds more.

The city’s thriving factories are always looking for workers, and several thousand Haitian migrants who were turned away at the U.S. border have found jobs and settled here in the last two years, but the prospect of thousands more destitute Central Americans has posed new challenges.

Delia Avila, director of Tijuana’s family services department, who is helping spearhead the city’s response, said migrants who can arrange legal status in Mexico are welcome to stay. 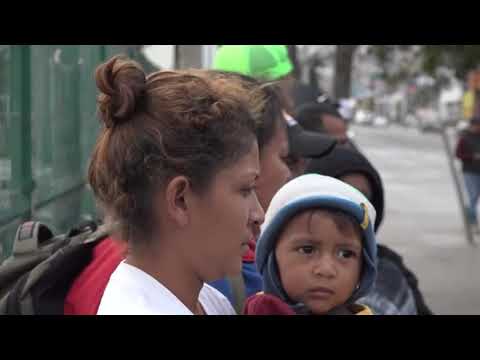 Mexican law enforcement was out in force in a city that is suffering an all-time-high homicide rate. A group of about 50 migrants, mostly women and children, walked through downtown streets Thursday from the city shelter to a breakfast hall under police escort.

As buses from western and central Mexico trickled in overnight and into the morning, families camped inside the bus terminal and waited for word on where they could find a safe place to sleep. One shelter designed for 45 women and children was housing 100; another designed for 100 had nearly 200.

Many endured the evening chill to sleep at an oceanfront park with a view of San Diego office towers and heavily armed U.S. Border Patrol agents on the other side of a steel-bollard fence.

Oscar Zapata, 31, reached the Tijuana bus station at 2 a.m. from Guadalajara with his wife and their three children, ages 4, 5 and 12, and headed to the breakfast hall, where migrants were served free beef and potatoes.

Back home in La Ceiba, Honduras, he was selling pirated CDs and DVDs in the street when two gangs demanded “protection” money. He had already seen a colleague gunned down on a street corner because he couldn’t pay. He said gangs called him and his wife on their cellphones and showed up at their house, threatening to kidnap his daughter and force her into prostitution if he didn’t pay.

When he heard about the caravan on the TV news last month, he didn’t think twice.

“It was the opportunity to get out,” Zapata said.

Zapata said he hopes to join a brother in Los Angeles but has not yet decided on his next move. Like many others, he planned to wait in Tijuana for others in the caravan to arrive and gather more information before seeking asylum in the United States.

Byron Jose Blandino, a 27-year-old bricklayer from Nicaragua who slept in the converted gymnasium, said he wanted to request asylum but not until he could speak with someone well-versed in U.S. law and asylum procedures.

“The first thing is to wait,” Blandino said. “I do not want to break the laws of any country. If I could enter in a peaceful manner, that would be good.

To claim asylum in San Diego, migrants enter their names in a tattered notebook held together by duct tape and managed by the migrants in a plaza outside the entry to the main border crossing.

On Thursday, migrants who registered six weeks ago were getting their names called. The waiting list has grown to more than 3,000 names and stands to become much longer with the caravans.

Francisco Rueda, the top deputy to Baja California state Gov. Francisco Vega de la Madrid, said that if all migrants from the caravan currently in Tijuana were to register to seek asylum in the U.S., they would likely have to wait four months in Mexico at current processing rates. For that reason, the state has asked Mexican federal authorities to encourage others in caravans to go to other border cities.

Rueda reported that about 1,750 migrants from the caravan had now reached Tijuana. Private shelters can house about 700, and the city-owned gym and sports complex has a capacity of 1,000 with the potential to expand to 3,000.

“This is not a crisis,” he told reporters, while allowing that “this is an extraordinary situation.”

There are 7,000 jobs available in the state for those who can obtain legal status in Mexico, Rueda said. He touted Tijuana’s integration of Haitian migrants over the last two years and the state’s relatively low unemployment rate.

The migrants have met some resistance from local residents, about 100 of whom confronted a similar-size group of Central Americans who were camped out by the U.S. border fence Wednesday night.

“You’re not welcome” and “Get out!” the locals said, marching up to the group.

Vladimir Cruz, a migrant from El Salvador, shook his head and said: “These people are the racists, because 95 percent of people here support us.”

“It is just this little group. ... They are uncomfortable because we’re here,” Cruz said.

Playas de Tijuana, as the area is known, is an upper-middle-class enclave, and residents appeared worried about crime and sanitation. One protester shouted, “This isn’t about discrimination, it is about safety!”

There are real questions about how the city of more than 1.6 million will manage to handle the migrant caravans working their way through Mexico, which may total 10,000 people in all.

“No city in the world is prepared to receive this number of migrants,” said Tijuana social development director Mario Osuna, adding that the city hopes Mexico’s federal government “will start legalizing these people immediately” so they can get jobs and earn a living.

Dozens of gay and transgender migrants in the caravan were already lining up Thursday to submit asylum claims, though it was unclear how soon they would be able to do so.

The caravan has fragmented somewhat in recent days in a final push to the border, with some migrants moving rapidly in buses and others falling behind.

On Thursday, hundreds were stranded for most of the day at a gas station in Navojoa, some 750 miles (1,200 kilometers) from Tijuana.

“We were dropped here at midnight ... in the middle of nowhere, where supposedly some buses were going to come pick us up, but nothing,” Alejandra Grisel Rodriguez of Honduras told The Associated Press by phone. “We are without water, without food.”

After about 12 hours seven buses began arriving to collect the migrants, Rodriguez said, but they quickly filled up.

Jesus Edmundo Valdez, coordinator of firefighters and civil defense in Navojoa, said Wednesday that authorities were providing food, water and medical attention to migrants there. His phone rang unanswered Thursday.