Surge in migration throws Greek islands back into crisis

New arrivals on the Greek island of Lesbos have to fend for themselves outside its barbed wire perimeter — in a maze of tents, each sprayed with a number in black paint.

Afghan migrant Ismutallah Heideri lives in the “800s section,” reached by zig-zagging through washing lines, power cords precariously fanning out from a circuit box, and children playing barefoot on the stony ground.

He has spent the last 30 nights curled up inside a small tent kept immaculately tidy with his wife, 4-year-old daughter, and two sons, who are 1 and 13.

“Nothing makes sense here,” he said in a voice that shook at times. “We are all suffering.”

As Heideri reached Lesbos in late August, the rate of arrivals hit the highest level since a European Union crackdown on migration three years ago.

Lesbos and other Greek islands facing Turkey’s mainland were used as a physical barrier to Europe’s mainland — set up with camps, international coast guard patrols, and new restrictive travel rules.

A year ago, Greece quietly relaxed those rules to ease severe camp overcrowding and calm tempers among islanders hurt by the crisis’s impact on tourism. Thousands of asylum-seekers were ferried to the mainland where the state-run camp network was expanded.

But conditions on the islands have steadily worsened and patrols are still unable to stop migrants fleeing war and poverty.

Moria refugee camp on Lesbos was built to house 3,000 people but currently hosts a record 12,000 — with 7,000 on the hillside sprawl where pre-winter conditions are becoming increasingly desperate.

“For every meal, for every official paper, for everything here, we have to stand in line. For the showers, to use the toilets, to get food, I have to stand in line for eight hours every day,” said Heideri, a 40-year-old construction worker who initially fled to Iran but couldn’t enroll his children in school there. 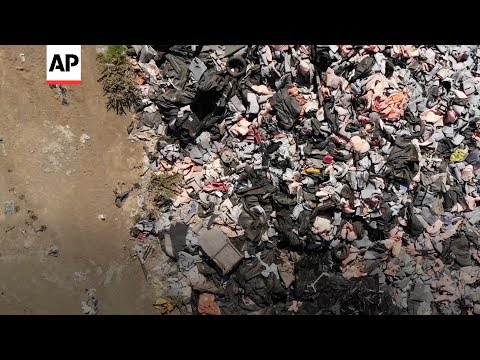 Life vests are piled high at a dump on the Greek island of Lesbos where the number of migrant arrivals from Turkey has surged in recent weeks. (AP Video/Iliana Mier)

“It doesn’t matter where we end up. I just want to live somewhere legally, be safe, and see my kids go to school.”

The spike in arrivals has added strain in ties between NATO allies Greece and Turkey, which are already at odds over natural gas drilling rights in the eastern Mediterranean and other long-standing disputes.

Lesbos, Greece’s third-largest island, is a magnet for migrant traffickers along the Turkish coast who aim dinghies at the island’s flat northern coastline or at the seafront lights of its international airport.

NATO deployed ships in the eastern Aegean Sea the following year and the number of monthly arrivals on Lesbos fell sharply to 3,080 by September 2016 and has remained fairly stable since, according to data provided by the U.N. refugee agency, UNHCR.

That rate jumped this summer, with September arrivals at 7,712. Lesbos has again become the busiest entry point in Europe.

Afghans make up the largest group of new arrivals, followed by migrants from Syria, Congo, and Iraq.

Moria was officially closed to new arrivals over the weekend, and the government has promised it would move thousands more to the mainland and use military resources to support coast guard patrols.

But local officials are pressing for a more ambitious shift in policy.

“About one in every six people on this island got here by illegal means and the situation has become untenable,” Constantinos Moutzouris, regional governor for the North Aegean islands, told The Associated Press.

“We are asking for the evacuation of the islands and for a number to remain that is proportionate to the population (of Lesbos),” he said.

“The people who come here are under intense strain, having crossed continents, traveled with young children, and covered large distances on foot. They cannot be massed together on a small area of land. Winter is coming and that always makes conditions worse.”

In response to a question from the AP, European Commission spokeswoman Natasha Bertaud said the EU would consider any request by Athens for additional support.

“I’m not aware of any change in policy on the Greek side,” she said. “We’ve noted with concern that a large number of arrivals have been reported in Lesbos over the past week, which is undoubtedly putting additional pressure on a system that is already under great strain.”

Iliana Mier and Michael Varaklas in Lesbos, and Samuel Petrequin in Brussels, contributed to this report.

Full AP coverage of the migrant crisis at https://www.apnews.com/migrants