Nearly 1,600 miles (2,575 kilometers) apart, the cities of El Paso, Texas, and Dayton, Ohio, have been united in grief and pain by a pair of shootings that left more than 30 people dead.

In the Texas border city, a shooter who opened fire at a Walmart store left 22 people dead and some two dozen injured. Hours later, at an entertainment district in Ohio, another gunman killed nine people and injured at least 27 others.

Here are the stories of some of the victims:

An account of self-sacrifice emerged Monday involving a grandfather who died in the mass shooting in El Paso, while his wife and granddaughter survived.

Stephanie Melendez said that her 63-year-old father, David Johnson, was shot and killed near the checkout counters at the Walmart where the attack took place. She credits Johnson with saving the life of her 9-year-old daughter and his own wife by thrusting them to the floor below a counter and out of the way of gunfire before he was killed.

“He saved them,” Melendez said. “He pushed them underneath.” Johnson’s wife was unavailable to describe the events firsthand.

Raul Melendez believes his daughter’s life was saved by the actions of Johnson, but still worries about what she may have witnessed. 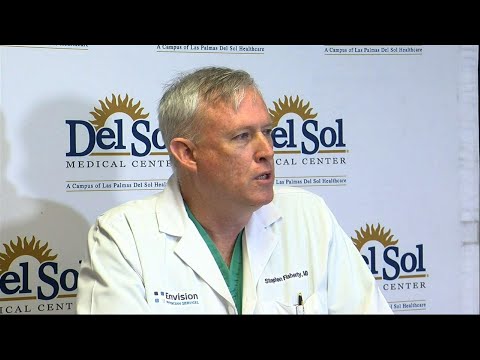 “I hope she didn’t get to see anything and that she’s not affected later on,” he said.

Raul said he blames the shooter for what happened and nothing else.

Co-workers of Johnson, a salesman, delivered flowers and food as family members gathered in mourning on Monday evening at a one-story home.

Javier Amir Rodriguez, 15, was starting his sophomore year in high school when he was fatally shot at the store.

The Clint Independent School District, which identified the teen as being among the victims Monday, said he attended Horizon High School in El Paso.

The district said it had been in contact with his family and sent condolences. Valeria Chavez, a cousin of the youth, told KFOX-TV that Rodriquez was at the Walmart with an uncle who described what happened.

“He told me my cousin had made eye contact with the shooter and they were in the bank and as soon as the shooter walked in, he grabbed my cousin. He says he saw the shooter shoot him,” Chavez said.

The school district said counselors would be available, and a vigil was set for Monday night at the high school’s football stadium.

Arturo Benavides, a U.S. Army veteran who retired as a bus driver a few years ago, was checking out at the Walmart store when the gunman entered.

His niece, Jacklin Luna, told the Los Angeles Times that 60-year-old Benavides was among those killed. His wife, Patricia, was sitting on a nearby bench and was pushed into a bathroom for safety, Luna said.

Benavides, who was born and raised in El Paso, had worked as a bus driver for El Paso’s Sun Metro.

“I spent my childhood waking up at their house, sitting out on the front porch with him on Sunday mornings, listening to the oldies on the radio,” said Luna, who described him as kind and generous.

His nephew, Ruben Rojas, said Benavides was an “easygoing” man who enjoyed watching sports and was also a good Roman Catholic who went to Mass.

Ivan Manzano, who had a 5-year-old daughter and 9-year-old son, was from Ciudad Juárez, Mexico, and ran a business that supplies orthopedic implants.

His wife, Adriana Manzano, learned from the FBI that he was killed in the shooting in the Walmart. She traveled to the Mexican consulate in El Paso on Monday to repatriate her husband’s body, and said he was known by everyone as friendly, calm — “very practical.”

Adriana Manzano said she has told her children only that their father had died in an “accident,” believing that giving a full explanation might generate resentments.

JORDAN ANCHONDO: ‘GAVE HER LIFE’ FOR HER BABY

Jordan Anchondo was among those killed in El Paso, Anchondo’s sister said, and she apparently died while protecting her 2-month-old son from the hail of bullets.

Leta Jamrowski of El Paso spoke to The Associated Press as she paced a waiting room at the University Medical Center of El Paso, where her 2-month-old nephew was being treated for broken bones — the result of his mother’s fall.

“From the baby’s injuries, they said that more than likely my sister was trying to shield him,” she said. “So when she got shot she was holding him and she fell on him, so that’s why he broke some of his bones. So he pretty much lived because she gave her life.”

Jordan, a mother of three, and Andre Anchondo had dropped off her 5-year old daughter at cheerleading practice before going to shop for school supplies Saturday at Walmart. They never returned.

ANDRE ANCHONDO: HAD TURNED HIS LIFE AROUND

Andre Anchondo — the husband of Jordan Anchondo — had recently turned his life around after struggles with drug dependence and run-ins with the law, a friend recalled.

On Sunday night, John Jamrowski, the grandfather of Jordan Anchondo, said in a text message that his family has been notified of Andre Anchondo’s death.

“I love the guy,” Azzam said in a phone interview from San Marcos, Texas. “He had the character and the charisma.”

Azzam said Andre Anchondo had started a business in El Paso, building things from granite and stone, and made it successful through hard work. He also was on the verge of completing a family home.

“It makes you question your faith almost,” said Azzam, who is Muslim. “But God didn’t have a part in it. The hands of man altered my friend’s life in a drastic way.”

A native of East Africa who moved to the United States a few years ago, Ohio shooting victim Saeed Saleh was remembered as a “humble and quiet person” by a spokesman for his family.

Yahya Khamis, president of the Sudanese Community of Dayton, said Monday that he was speaking on behalf of Saleh’s family and coordinating funeral plans for the 38-year-old. Khamis said he didn’t know Saleh well but called him kindhearted.

“He was a very good guy,” Khamis said.

A father of three, Saleh was originally from Eritrea in East Africa and later lived in Sudan before immigrating to the United States a few years ago, he said.

He said Saleh’s friends and family were thankful for the support they had received from the Dayton community.

Monica Brickhouse was a Springfield, Ohio, native who was working as a recovery specialist for Anthem in Virginia Beach, according to her LinkedIn profile.

Damian Seaton, who worked with Brickhouse at a bank call center before it was closed down, remembered her as an excellent supervisor.

“She was just a very positive person,” Season told Norfolk TV station WAVY. “You always knew when you sat with her you had an easygoing spirit, somebody who was going to help you, advise you in the right way.”

The profile said she received an associate’s degree from College for America at Southern New Hampshire University in 2017 and volunteered for Toys for Tots. Friend Brittany Hart wrote on Facebook that Brickhouse and another victim, Beatrice Warren-Curtis, “checked in on my family and made your love for my family known.”

Brickhouse was also part of Two Good Girls, an event planning and catering business, according to her Facebook page.

A classmate remembered Ohio shooting victim Megan Betts, the sister of the gunman, as “artistic, polite” and someone who “loved going to band class.”

Addison Brickler, 23, rode the bus to school with Connor and Megan Betts. Megan would sit with her friend on the bus every day, Brickler said.

“She always had a smile on her face,” Brickler said.

“It’s harder for me to wrap my head around why he would do this to someone, his sister.”

Nicholas Cumer, a graduate student in the master of cancer care program at Saint Francis University in Loretto, Pennsylvania, was among those killed in the Dayton shooting early Sunday.

“Nicholas was dedicated to caring for others,” university President Malachi Van Tassell said in a statement.

The family released a statement through a relative saying they are “heartbroken by the loss of our Nicholas” and asking for privacy.

Cumer had been in Dayton as part of his internship program with the Maple Tree Cancer Alliance, which strives to improve the quality of life for those with cancer through exercise, nutrition and faith.

“He was well liked and respected by everyone on our team, and we all will miss him very much,” the organization said in a statement. Cumer was a week away from completing his internship.

Van Tassell said a Mass in Cumer’s memory will be arranged on campus this week.

LOIS OGLESBY: NURSING STUDENT WHO WANTED TO CARE FOR CHILDREN

Lois Oglesby, 27, was in nursing school and looked forward to a career that would make the most of her love for children, her cousin said. She was also the mother of a newborn and had an older daughter.

Derasha Merrett told the Dayton Daily News that she was up feeding her own newborn when a friend called her at 3 a.m. Sunday to tell her, through sobs, that Oglesby had died in the Dayton shooting.

“She was a wonderful mother, a wonderful person,” Merrett said. “I have cried so much, I can’t cry anymore.”

Merrett said she and her cousin grew up in the same church and that Oglesby worked at her children’s day care center.

“We all grew up in this little town,” Merrett said. “We’re all family.”

“Everyone loved Logan,” she said. “He was a happy-go-lucky guy.”

Turner said her son was out with a few friends when he was shot just outside a bar in Dayton’s historic Oregon District.

Turner had a degree from Sinclair Community College and went on to earn an engineering degree from the University of Toledo, his mother said. He also attended Wright State University for a while, according to Seth Bauguess, spokesman for the university in Dayton.

Turner’s mother said he had recently started working as a machinist at a company in Springboro.