Antetokounmpo to play for Greece at Basketball World Cup

ATHENS, Greece (AP) — Giannis Antetokounmpo will play for Greece at the basketball World Cup in China, saying on Friday he can play any position.

The NBA MVP said he hasn’t “talked to the coach about which position I’ll be playing ... the important thing is to play.”

“Whether I play the 1 (point guard) or the 5 (center), I don’t care,” Antetokounmpo added. “I’m a basketball player. I want to help the team any way I can.”

Antetokounmpo did not play for Greece at the 2017 Eurobasket. His absence led the Greek basketball federation to publicly accuse his Milwaukee Bucks team of staging a knee injury.

Antetokounmpo is in Athens to present his Nike signature shoe, which will go on sale in August.

He will also attend a 3x3 tournament he sponsors. The tournament will be played on three different Athens courts, with the finals on Saturday near his Athens home, where he first played basketball.

One of the courts has been decorated by a young Greek street artist with a giant image of a dunking Antetokounmpo and God touching him with his finger in the manner of Michelangelo’s ceiling mural in the Vatican’s Sistine Chapel. 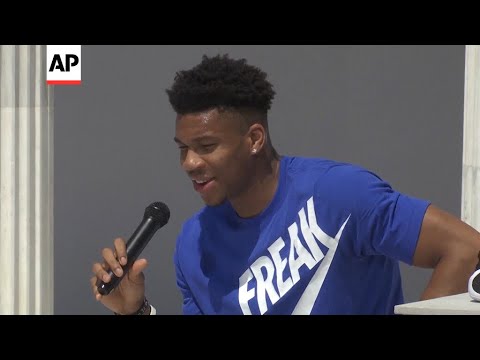 Earlier Friday, during the shoe presentation, Antetokounmpo mused about his journey from Greek-born child of Nigerian immigrants to him and his brothers being the only black kids among 300 students to becoming the first European basketball player to win NBA MVP.

He credited his hard work and great support system in his family, girlfriend and agent, as well as his self-belief.