DALLAS (AP) — Protesters condemning the shooting death of a black man in his Dallas apartment by a white off-duty police officer disrupted a City Council meeting Wednesday, prompting a recess to quell the outbursts.

Mayor Mike Rawlings temporarily halted the proceedings as dozens of demonstrators chanted “No justice, no peace” and people in the crowd repeatedly interrupted council discussions by angrily denouncing city and police officials.

Protest leaders said they want the city to establish a civilian board to review police conduct and that it be given the power to subpoena.

“It must have teeth. It must have subpoena power. It must be able to hold these police officers accountable for what they do,” said demonstrator Olinka Green. “Because if we were to do the same thing, you guarantee we’d be locked up tight.”

Demonstrators expressed their anger over the death Thursday of 26-year-old Botham Jean, who was shot after the officer says she mistook Jean’s apartment for her own.

Police used “pepper balls” on some of about 200 protesters at a demonstration on Monday. The next day, Police Chief U. Renee Hall criticized the use of the projectiles and ordered police investigators to conduct a review of the matter. 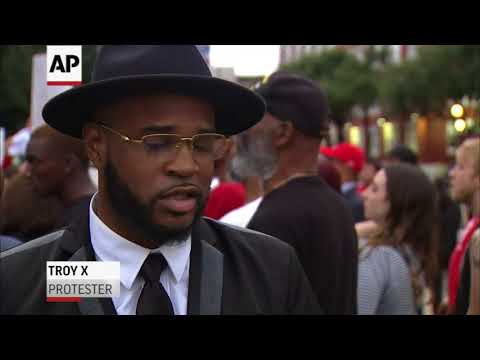 Protesters gathered at police headquarters in Dallas on Sept. 11, 2018, to speak out against the shooting death of a black man by a white officer who says she mistook his apartment for hers. (AP video)

Pepper balls, which usually contain the chemical in pepper spray, should only be used if there is an immediate threat to the public or if a commander at the scene calls for them to be used, Hall said. The projectiles irritate the nose and eyes.

Hall said she wants to meet with protest leaders to “address their concerns.”

Monday’s demonstration, which began outside Dallas police headquarters, came a day after officer Amber Guyger was arrested on a manslaughter charge in the death of Jean. She was released on bond.

The latest protest followed some initial praise from community leaders about how Dallas officials handled the aftermath of the shooting. Police acknowledged within hours that the officer made a mistake, turned over the investigation to independent state authorities and reached out to the Jean’s family.

Jean grew up in the Caribbean island nation of Saint Lucia before attending college in Arkansas. He graduated from Harding University in 2016 and had been working for accounting firm PwC.

Attorneys for Jean’s family have criticized the officer’s account of the shooting, saying it contradicted statements from neighbors.

The officer’s description of what happened was included in an arrest affidavit prepared by a Texas Ranger and released Monday, shortly after the district attorney announced that the case would be presented to a grand jury, which could decide on more serious charges than manslaughter.

Benjamin Crump, an attorney for Jean’s family, said Monday that the affidavit is “very self-serving.” Lee Merritt, who also represents the family, called it an attempt to “condone what happened, give her a break.”

Guyger, a four-year veteran of the police force, told investigators that she had just ended a 15-hour shift Thursday when she returned in uniform to the South Side Flats apartment complex. She parked on the fourth floor, instead of the third, where she lived, according to the affidavit, possibly suggesting that she was confused or disoriented.

When she put her key in the apartment door, which was unlocked and slightly ajar, it opened, the affidavit said. Inside, the lights were off, and she saw a figure in the darkness that cast a large silhouette across the room, according to the officer’s account.

The officer told police that she concluded her apartment was being burglarized and gave verbal commands to the person, who ignored them. She then drew her weapon and fired twice, the affidavit said.

She called 911 and, when asked where she was, returned to the front door to see she was in the wrong unit, according to the affidavit. Authorities have not released the 911 tapes.

The Dallas County medical examiner’s office said Jean died of a gunshot wound to the chest. His death was ruled a homicide.

Merritt said Monday that two independent witnesses have told him they heard knocking on the door in the hallway before the shooting. He said one witness reported hearing a woman’s voice saying, “Let me in! Let me in!” Then they heard gunshots, after which one witness said she heard a man’s voice say, “Oh my God! Why did you do that?”

Dallas County District Attorney Faith Johnson emphasized that her office was conducting its own probe, in addition to the investigation by the Texas Rangers. She will have the option of presenting more serious charges to the grand jury.

It’s not clear if Guyger has an attorney.

Guyger’s blood was drawn at the scene to be tested for alcohol and drugs, according to Hall, but authorities have not released results.

Sign up for the AP’s weekly newsletter showcasing our best reporting from the Midwest and Texas: http://apne.ws/2u1RMfv