In a show he titled “Once Upon a Time ... in Japan,” the designer captured the essences of cherry blossoms, Japanese gardens and Watteau gowns at New York Fashion Week. He used lace overlays, obi sashes, intricate swirl prints, romantic flowers, capes, one shoulder gowns, brocade fabrics and kimono-style dresses for spring-summer 2020.

“I was raised there. It’s where I was born. All the memories are there. Before, maybe I didn’t have confidence to use (the) Japanese element. So always journalists are asking me, ‘What is the Japanese influence in fashion,’ and I couldn’t answer that,” he told The Associated Press. “But now ... I have the confidence so I can use those kind of stuff.”

The 71-year-old Shoji is from Sendai but is based in America. He rolled out sleeveless dresses with embroidered tulle and colors that included periwinkle, coral, deep violet and also black and white. He also showcased body diversity with some curvier models on the runway.

He put a tie bow in front of a high-slit black gown trimmed in red with side cutouts. A cocktail dress in delicate pink had a wide black belt with a large bow to one side. A bright white gown had sleeves with a drape effect at the shoulders a low back. 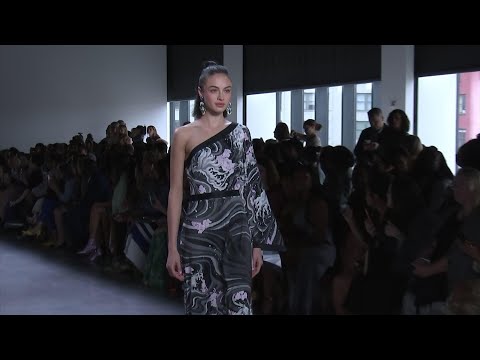 There was plenty of sparkle and drama in full tulle skirts on statement gowns, sometimes mixed with his lace overlay. Shoji stuck to florals in patterns and embellishment.