LAWRENCE, Mass. (AP) — A series of class action lawsuits stemming from the natural gas explosions in Massachusetts have been settled for $143 million, the utility blamed for the disaster and lawyers for the plaintiffs announced Monday.

The settlement is subject to the approval of a judge, according to Columbia Gas of Massachusetts, and its parent, NiSource Inc.

“Today marks another important step forward, as we continue to fulfill our commitment to residents and businesses,” NiSource President Joe Hamrock said in a statement.

The explosions and fires in the Merrimack Valley communities of Lawrence, Andover and North Andover on Sept. 13 killed one person, injured about 25 others, and damaged or destroyed more than 100 buildings. Many people were forced into temporary shelter, and thousands of homes and businesses went without natural gas service for weeks and even months during the winter.

“Families suffered for months in the gripping cold. Businesses shuttered, and lives were upended,” Elizabeth Graham, co-lead attorney for the plaintiffs, said in a statement. “To this day, the people most impacted by the explosions are not fully back on their feet, but we believe this settlement is the quickest and most just method to ensure that residents and businesses are made whole again.” 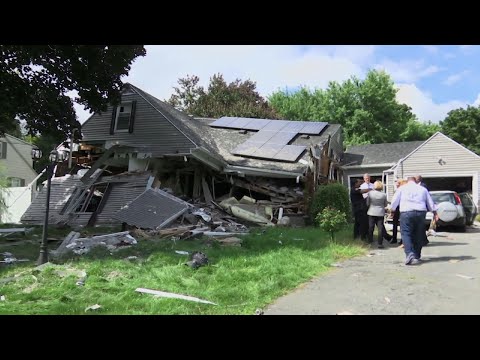 The explosions were blamed on an overpressurization of gas transmission lines during routine replacement. The National Transportation Safety Board is continuing its investigation.

The agreement announced Monday is separate from an $80 million settlement reached in May with the three communities to address infrastructure damage.

It is also separate from settlements with two families.

In July, Columbia settled with the family of Leonel Rondon, 18, who died when a chimney collapsed on his vehicle in the driveway of a friend’s home.

In April, the utility settled with the Figueroa family, of Lawrence. Several members of the family were injured and their home was heavily damaged. Details of the Rondon and Figueroa settlements have not been made public.

“I don’t think anything can ever be fair to a community where so many people lost family members, lost homes, lost livelihoods,” Republican Gov. Charlie Baker responded when asked Monday if he believed the settlement was a fair one.

Baker, however, added that victims of the disaster were well represented in negotiations with the utility, “and if they believe that was a deal worth signing, I’m going to side with them on that.”

NiSource has so far spent about $1 billion responding to the disaster, the company said.

Residents of the three communities will be entitled to recover compensation for disruption of their lives and property damage not previously covered, according to the attorneys. Businesses will be able to claim lost income and lost inventory.

This story has been corrected to show that Joe Hamrock is CEO of NiSource, not CEO of Columbia Gas of Massachusetts.