Refreezing still a threat after snowstorm; rain on the way

Sunny skies in North Carolina and Virginia were helping to thaw out snow drifts left behind by the weekend storm, but temperatures were expected to plunge again, refreezing moisture on the roads Wednesday morning. North Carolina’s governor also warned that runoff from melting snow could combine with an expected rainstorm this week to increase the flooding threat along some rivers.

The storm was blamed for at least three deaths in North Carolina. Some roofs buckled under the weight of the snow, with a building collapse killing three horses at a farm in Gaston County, North Carolina. Tens of thousands of people were without power in several states.

North Carolina Gov. Roy Cooper urged people in hard-hit areas to still think twice about driving. Secondary roads in some places haven’t been plowed and temperatures were expected to dip into the 20s or teens again overnight, creating the potential for icy spots again Wednesday as melted snow refreezes even on roads that have been cleared. 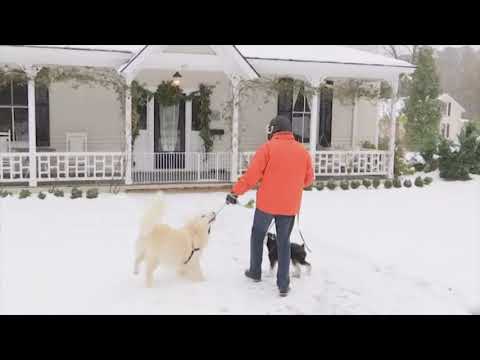 “My message is simple: If conditions in your area are still dangerous, don’t take the risk,” the governor said. “Sit tight and wait for the sunshine and safety.”

Overall, the North Carolina Highway Patrol has responded to 2,300 accidents since the storm blew in, with some new accidents reported on spotty patches of ice early Tuesday.

And with rain forecast for Thursday and Friday, Cooper urged residents along rivers to “be alert for any flood warnings from local officials.”

Cooper said 60 school districts remain closed after the storm dumped more than 2 feet (0.6 meters) of snow in western parts of the state. A National Weather Service map indicates that more than a third of the state’s 100 counties had accumulations of 6 inches (15 centimeters) or more.

The governor said crews have restored power to a half-million North Carolina customers since the height of the storm. As of Tuesday afternoon, about 49,000 outages remained in North Carolina, South Carolina and Virginia, according to the website poweroutage.us.

One positive aspect of the storm came at ski resorts in the region. Beech Mountain Resort in western North Carolina, which had 14 trails open Tuesday, said the storm brought 2 feet (60 centimeters) of new snow. Wintergreen Resort in Virginia offered a similar report on its website Monday: “Up to 20″ of snow has blanketed our mountain making for some of the best slope conditions we’ve seen this early in years.”