Elizabeth Warren’s big crowds? She has a plan for them, too

AUSTIN, Texas (AP) — Thousands of people packed under the marble arch of Manhattan’s Washington Square Park to hear Elizabeth Warren on Monday. They didn’t show up by accident.

The crowd was the product of a carefully planned, data-driven strategy to identify supporters, attract them to a rally and ultimately convert them into voters, a plan that goes well beyond producing a compelling scene for television.

In an era where campaigns increasingly try to leverage technology to tactical advantage, the attention to detail by Warren’s team stands out. Like other candidates, before an event, her campaign invites past donors and other likely supporters who live nearby using email, mass text alerts and “peer-to-peer” text messages that staffers write to individuals.

But that’s just the start. At the venue itself, attendees must line up and check in using their phones, even if they’ve previously RSVP’d. When finished, they’re sent a picture of the senator’s golden retriever, Bailey, which they show at the door to be issued a red-dot sticker proving they’ve complied.

Warren’s campaign spent months testing how best to collect information, trying out things like different colors of paper signup sheets before settling on the current system since attendees get a doggie picture they’re likely to enjoy.

Warren has mastered the art of drawing thousands to her rallies, but, more importantly, those turning out are also a proxy for her recent rise in the polls. And the crowds have been building for weeks in places that have received relatively little attention from other candidates, including Seattle, St. Paul, Minnesota , and Austin, Texas.

In 2016, the enormous crowds who flocked to see Bernie Sanders were an early sign of the enthusiasm that would build around his campaign and lead him to nearly defeat Hillary Clinton for the Democratic nomination. This cycle, Sanders and other Democrats have also staged large rallies, but it is Warren who seems to hold the energy edge. Her rallies serve as an outlet for liberals to embrace an alternative to the populism that swept President Donald Trump into office, with crowds frequently chanting “Two cents!” backing Warren’s proposed wealth tax rather than “Build the wall!”

Trump’s large crowds four years ago hinted at his coming Election Day upset. Similarly, Barack Obama was still largely unknown nationally when he launched his presidential bid in 2007 — yet demonstrated his early strength by drawing 20,000 at a Super Bowl Sunday rally in Delaware.

“When you get a big crowd and reporters are covering that and they’re like, ‘Wow, there’s a lot of energy in the room,’ ... that can absolutely get you free earned media,” said Brendan Steinhauser, a Republican strategist and former top conservative grassroots organizer. “And if we learned anything from 2016, earned media is really valuable and can — pardon the pun — trump the paid media.” 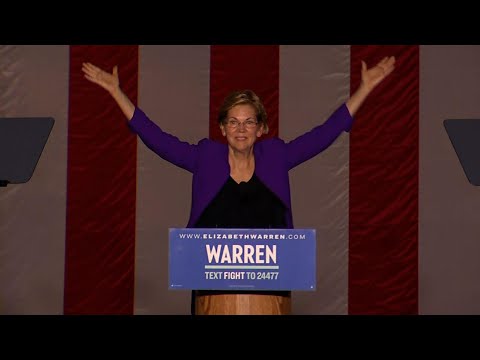 That’s because large rallies can show enthusiasm but often aren’t good indicators of whether support is growing beyond a candidate’s established base. The people who show up to such events tend to be self-selecting.

But when voting began, it became clear that the former Vermont governor was more effective at building ballyhooed crowds than winning votes.

“The issue is going to be, all that buzz on television and online, and the resources that it gets you, does that expand beyond that base support?” Trippi asked. “In the Dean campaign, it didn’t. In Obama’s it did.”

Judging crowd size is subjective, meanwhile, and can be so politically charged that police sometimes refuse to offer official estimates.

Warren’s campaign says its crowd-size estimates partially come from staffers and volunteers using counting clickers to gauge the number of attendees. It estimated the Manhattan attendance at 20,000-plus, and staffers said that more than 5,000 people heard their candidate last week in Austin — despite thunderstorms blowing in earlier in the day.

Speaking to reporters on Tuesday, Trump said of Warren’s New York crowd: “Anybody can do that.”

The Warren campaign won’t discuss its “targeting” of would-be supporters or such analytical components like how many people it has in existing nationwide donor, volunteer or supporter lists. Aides concede they hope anyone invited to rallies will increase turnout by bringing friends, neighbors or relatives, but refuse to quantify how many new attendees such scenarios tend to generate.

Still, attracting the crowd is only the beginning.

“The crowds are great, but that doesn’t impress me,” he said of Warren. “What matters is the content of the speech.”

Betting many will like what they see, though, Warren staffers follow up with rallygoers quickly, issuing text or email solicitations for donations or future volunteering — sometimes during or immediately after the event.

In states where Warren’s campaign has lots of staffers, like make-or-break Iowa, large teams of organizers can easily make follow-up contact. In other places, including Austin, staff based at Warren’s Boston headquarters travel to the area beforehand, hoping to convert rally attendees into future volunteers.

Warren spends hours after each event taking selfies with attendees — and her staffers and volunteers work those lines, too, looking for future volunteers or people willing to try to recruit friends and neighbors to be supporters.

Sometimes Warren herself pitches in.

Nolan Screen, a 19-year-old student at Austin’s St. Edwards University, waited about half an hour for a picture with Warren and told her that he was trying to learn as much as possible about the political process before casting his first presidential ballot. Warren said she’d be there for advice and suggested he send her a direct message on Twitter.

This story has been corrected to show that Warren’s Minnesota rally was in St. Paul, not Minneapolis.