COLUMBUS, Ohio (AP) — Step lightly between two facing mirrors at a first-of-its-kind museum honoring and celebrating the experiences of military veterans, and it takes your breath away. Behind and in front of you, as far as the eye can see, are folded flags.

You are standing midstream among the tidy triangles of past and future, the men and women who gave and will give their lives in service to the United States. This remembrance gallery is basked in sprays of color arranged on the windows, like stained glass, in the patterns of military service medals.

Developers of the $82 million, 53,000-square-foot National Veterans Museum and Memorial, which opened Saturday on Columbus’ downtown riverfront, seek to inspire and educate visitors with this and other inventive interactive displays.

General Colin Powell, the former secretary of state and chairman of the Joint Chiefs of Staff, serves as honorary chair of the museum’s board of advisers. He said during opening ceremonies that by delving into what inspires veterans to serve, the nation can begin to heal. 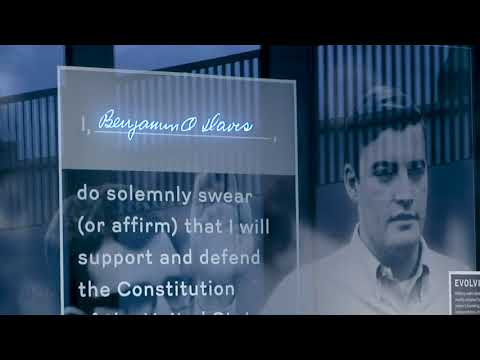 “They represent the rainbow that is America, the strength and goodness of America,” he told the crowd hunkered down against cold and rain. “And, in this day when we’re having trials and tribulations, we’ve just had another tragedy in Pittsburgh, let’s remember that basically this is a good place, a welcoming place, a warm place. We’re all one team, one family, and let us bring ourselves together again and set aside these terrible incidents that are so contaminating our society at this moment.”

The museum is neither a war memorial nor a traditional military museum, said Amy Taylor, chief operating officer of the Columbus Downtown Development Corp., which spearheaded the effort. The goal is to show veterans’ individual lives before, during and after they serve.

“It’s a narrative journey and, while artifacts are here and we have them, they’re only here to advance the story,” Taylor said. “So it’s not like, oh, I’m here to see the original ‘Star-Spangled Banner’ flag. No, you’re here to learn a story and maybe an ice cream carton helps tells that story, or a drum helps tell that story.”

The project, conceived in 2012 and constructed over nearly three years, was the vision of Ohio native John Glenn, the late military hero, astronaut and U.S. senator who died in 2016. Taylor calls the museum a “labor of love” to Glenn and the veterans committee he convened to plan a site to memorialize “ordinary Americans doing extraordinary things.”

The structure’s sweeping concrete arches have drawn attention by designers, as well. Architectural Digest dubbed the museum one of the most anticipated buildings of 2018. Taylor said its lack of internal supporting columns is symbolic. “The strength comes from within, which we thought was appropriate for veterans,” she said.

Congress also has taken note. In June, the facility was designated the nation’s veterans memorial and museum.

Glenn is among dozens of veterans famous and obscure whose stories — at turns, poignant, intimate, or inspiring — are shared throughout the building. His son, David, said during Saturday’s opening that his father’s training taught him to value the lives of others at least as much as his own.

“This is deeply important stuff, a deeply important subject to pay attention to. In my mind, it has to do with deeply ethical behavior, the Golden Rule and the common good all wrapped up somehow together, the antithesis, the very opposite, of just looking out for No. 1,” David Glenn said. “And this new museum... will help us all to reflect on that experience of war and of service.”

Another featured veteran is Tom Moe, a former state veterans’ services director under Republican Ohio Gov. John Kasich who spent more than five years as a prisoner of war in Vietnam.

Moe downplayed his own experience during a recent visit to the museum, instead focusing on his wife — who worked and raised their daughter alone while he was imprisoned — and on a “special friend” memorialized at the museum, the late Sen. John McCain.

“John and I lived next door to each other in Hanoi,” he said. “Although we couldn’t tap on the wall, there was a walkway between our rooms and some months, probably over a year, we spent waggling our fingers under the door and passing by a door and saying nice things, like, ‘Cheer up,’ and so forth.”

The museum also remembers those who don’t come home. A quiet, 2.5-acre grove whose waterfall is visible from the museum foyer is meant for reflection and remembrance.

Leslie Wexner, the billionaire founder, chairman and CEO of L Brands, was a key backer of the museum project. He said Saturday that another building extending the museum’s educational and community efforts is envisioned.

Taylor said its developers hope the museum’s location in the Midwest will allow many of the 21 million living veterans to make pilgrimages to the site, or interact through its website and community efforts.

More information is available at: http://www.nationalvmm.org.

AP reporter Angie Wang in Cincinnati contributed to this report.