NORTH MYRTLE BEACH, S.C. (AP) — Mercedes O’Neill lives just two blocks from the Atlantic Ocean in a zone so imperiled by Hurricane Florence that it has been marked for mandatory evacuation.

But for now, she plans to ride out the hurricane in her home with her boyfriend, her 6-year-old daughter and two cats, even though the prospect scares her.

O’Neill, who has a son due Sept. 27, thought hard about leaving. But because her family lives paycheck to paycheck, the idea seemed too costly. And she worried about not getting home in time to return to her job at a Family Dollar store after the storm passes.

Their dilemma reflects the limited choices faced by many households in the storm’s path.

First, a family member offered a hotel room 200 miles (320 kilometers) inland from her North Myrtle Beach home in Aiken. Then Florence slowed down, suggesting that the coast would get even more rain and evacuees would be forced to stay away longer.

Since they were surrounded by helpful neighbors and the storm weakened from Category 4 to Category 2, the couple decided to board up and hunker down.

“I could go. But you can’t go for every storm. Yes, I’m scared. But I would be more scared if we were alone. Neighbors helping neighbors, you know?” she said as her daughter, Sophie, rode her bike out of the driveway and into the empty street. 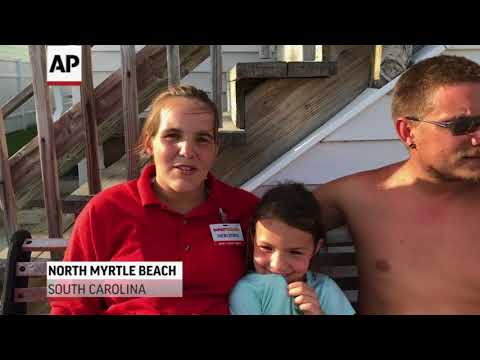 Emergency shelters are available, but O’Neill worried that they might not offer enough privacy or take pets. She worried too about her soon-to-arrive baby. Would she be safer somewhere else? Or would she have to accept lesser medical care in another town?

Evacuating isn’t cheap. The cost of gas, food, lodging and other essentials adds up quickly. And for many workers, fleeing also means being away from the jobs that provide their income.

O’Neill got off work a few hours Wednesday before her boyfriend and a neighbor finished putting plywood on the widows. On one window was spray painted “Thank God for Trump.” On the other piece of plywood was “God bless the USA.”

If the forecast takes a sudden, drastic turn, they still might leave and join the estimated 300,000-plus people who had left South Carolina’s coast by Wednesday afternoon.

The decision cuts across economic classes. About a mile away, Simon Ohayon had not decided whether to leave his home because he wants to be near his beachwear store, Kings At the Beach, which sits across the street from an oceanfront park.

“I think we can get 3 or 4 feet of water up here. And then waves,” Ohayon said. “I put my merchandise up off the ground, but I don’t know if I want to leave.”

Ohayon said he would look at the forecasts and leave if Florence looks likely to hit as a Category 3.

After the system is gone, O’Neill figures the Family Dollar store will try to reopen as soon as possible, and then she can get back to making money.

“It just takes forever to get back in,” said O’Neill’s boyfriend, Kelly Johnson.

She plans to keep in touch with her store manager and several neighbors waiting out the storm. If one of them is in trouble, they figure the rest can help.

“I think we all thought about leaving. But since we’re together, I think that will make it easier,” she said.

And then there were the cats. Even if she had money and a place to stay, she could hardly bear to leave Klepto (“He always steals the kitty toys”) and Mia (“It’s pronounced mee-ya, but stands for MIA because I could never find him”) behind.

“Pets are part of our family too,” she said.

Read his work at https://apnews.com/search/jeffrey%20collins .