Castro impresses in Democratic debate; can he capitalize?

MIAMI (AP) — Julián Castro got a second chance at a first impression at the Democratic presidential debate. Now he has to figure out what to do with it.

Castro, once seen as a rising star in Democratic politics, was chosen as the keynote speaker at the party convention in 2012 and then as Housing and Urban Development secretary by President Barack Obama. But he had been struggling to gain notice in his 2020 presidential bid.

In Wednesday’s debate, he seized on the issue of immigration with a proposal to rewrite federal law in a way that would decriminalize illegal border crossings. Castro, the only Latino in the race, drove his point home by attacking his fellow Texan in the presidential race, former congressman Beto O’Rourke.

O’Rourke says the law has to allow for prosecution of drug dealers and human traffickers, but Castro retorted, “I think that you should do your homework on this issue.”

The moment received widespread notice, and on Thursday, Castro found himself in an unusual place: the object of a flood of media requests. He had seven interviews scheduled, all but one of which were booked after Wednesday night. His campaign said it had seen a “four-digit percentage spike” in fundraising on Wednesday night. Castro said it was “safe to say ... we probably had our best fundraising night of the campaign.” 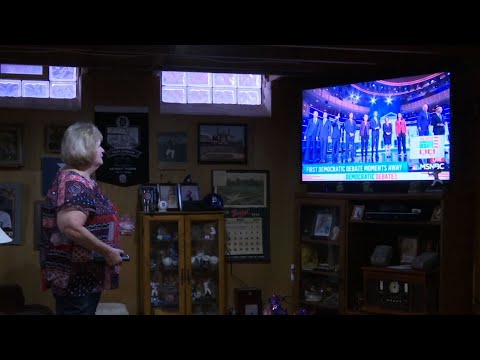 As potentially beneficial as the dust-up was for Castro, it could damage O’Rourke — even though he and Castro have long been close. The former housing chief and his twin brother, U.S. Rep. Joaquin Castro, attended O’Rourke’s election party in El Paso last November, when O’Rourke came surprisingly close to unseating Republican Sen. Ted Cruz.

O’Rourke, whose immigration proposal is narrower and focuses specifically on immigrants seeking asylum, responded Thursday that Castro “got his facts wrong.”

“I think we want to get to the same place, and I think Secretary Castro may not understand that our proposal calls for every family, every person who is seeking refuge or asylum ... to be welcomed,” O’Rourke said during a visit to a facility housing immigrant children near Miami. “The big picture is not what two people said on the debate stage. The big picture is what is happening here and that we need to make sure we do everything as a country ... to free those kids.”

Amid two dozen Democratic candidates, Castro, who is typically soft spoken and understated, has struggled, both in terms of his standing in polls and in fundraising. The test for him going forward is whether Wednesday’s performance will be ephemeral or enduring.

“We’re going to hit the gas in the early states and in my home state of Texas, and I’m confident I’m going to keep getting stronger and stronger,” said Castro, who is also the former mayor of San Antonio.

He will start this weekend in Texas, where O’Rourke has had a much broader base of support. Castro’s aides say his debate performance should provide needed momentum. He will then head back to the states that are holding early primaries and caucuses, including Iowa, where he said he plans to spend eight or nine days this month.

Castro and O’Rourke are both scheduled to hold events on Friday in the Texas capital of Austin, with Castro attending an evening Democratic Party fundraiser. Party spokesman Abhi Rahman says O’Rourke wasn’t invited— not because the party didn’t want him or wanted to avoid having both Democratic presidential hopefuls in the same room, but because organizers simply didn’t know O’Rourke would be in town.

“It came out of the blue,” Rahman said when asked about the event O’Rourke had scheduled nearby that’s set to start one hour before Castro’s. “At the end of the day, it will be good for both of them.”

The party said it has standing requests with all Democratic presidential candidates to hold fundraisers on its behalf — and looks forward to possibly working with O’Rourke on one later. In a news release announcing its event, meanwhile, the O’Rourke campaign pointed to a recent Texas poll showing the former congressman with a commanding lead over Castro in the state.

The debate allowed Democrats to draw contrasts with President Donald Trump on his signature issue of a stricter and punitive immigration policy. The issue took on added urgency after reports last week of unsanitary and dangerous living conditions at immigrant child detention centers and the publication by The Associated Press of a graphic photo showing a father and toddler daughter who died trying to cross the border.

The friction with O’Rourke, Castro said, was not meant to be personal. “I like him,” Castro said. “We have a policy disagreement here.”

Still, Castro says he has a better shot of winning Texas than O’Rourke.

“If I’m the nominee ... we will see unprecedented gains in the Latino vote, that it’ll go through the roof and that will have positive consequences for the Democratic Party like we’ve never seen before,” he said.