The Latest: Man recalls death of daughter, wife in blast

A man whose Australian wife and only child died in a bomb blast in a Sri Lanka church said he walked out ahead of his family moments before the explosion.

“I don’t know what to do,” he said. “We used to go to that church every Sunday. We never expected this.”

Kolonne said the family moved from the Australian city of Melbourne in 2014 to Sri Lanka, where his wife started a consultancy business. Their child was a student at an international school at Colombo.

The U.N. Security Council has condemned the Easter Sunday bombings in Sri Lanka as “heinous and cowardly terrorist attacks.”

The U.N.’s most powerful body issued a statement Monday expressing sympathy and the need to hold perpetrators of the violence accountable.

Sri Lanka’s U.N. mission plans a memorial meeting Wednesday for diplomats based at the world organization’s headquarters in New York.

Through a spokeswoman, U.N. Secretary-General António Guterres of Portugal expressed his condolences to the families of the victims and the people and government of Sri Lanka. 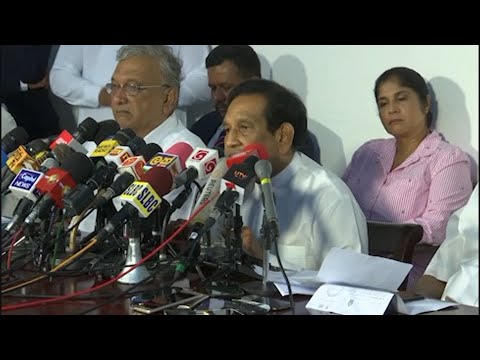 At least 290 people died and 500 were injured in bomb blasts.

The FBI says it’s providing assistance in the investigation into the Easter bombings in Sri Lanka.

An FBI spokeswoman confirmed the aid on Monday but did not elaborate on what specific help was being offered or provided.

The FBI routinely helps foreign governments in investigating terror attacks outside the United States, including by providing agents on the ground or technical expertise.

Nearly 300 people were killed and 500 were injured in the series of bomb blasts. Sri Lankan officials say the main attacks were carried out by seven suicide bombers from a local militant Muslim group.

Officials at an elite Washington-area private school confirmed the death in Sri Lanka of one of its students in an email to parents.

The Washington Post has reported the fifth-grade boy, Kieran Shafritz de Zoysa, had been on leave for the last year in Sri Lanka and was killed in the bomb attacks Sunday.

The school, Sidwell Friends, wrote that Kieran was passionate about learning and adored his friends,

The U.S. State Department is confirming that at least four Americans were killed in a series of Easter Sunday bombings that rocked Sri Lanka.

The department says that in addition to those killed, several others were seriously injured.

It gave no details about the identities of the victims, citing privacy concerns. It extended condolences to friends and families of all victims and said it was continuing to provide support to Americans affected by the blasts.

Secretary of State Mike Pompeo said earlier that the Christian holiday had been “marred by a horrific wave of Islamic radical terror and bloodshed.”

Nearly 300 people were killed in the explosions.

There is conflicting information from Sri Lanka government officials about how many foreigners died in the attacks.

Tourism Minister John Amaratunga says 39 foreigners were killed. But the country’s foreign ministry put the number of foreigners killed 31. The differing figures could not immediately be reconciled late Monday night.

A British husband and father has confirmed the death of his wife and two children in the Sri Lanka attacks.

Ben Nicholson said Monday that his wife Anita Nicholson and their 14-year-old son Alex and 11-year-old daughter Annabel were killed while in the restaurant of the Shangri-La Hotel in Colombo.

He says that “mercifully, all three of them died instantly and with no pain or suffering.”

Nicholson says the family was on a vacation. He thanked medical teams at General Hospital in Colombo for their help and asked for privacy so he could grieve with his extended family.

The statement also says that Sirisena would meet with foreign diplomats to seek international assistance.

It citied intelligence agencies’ reports that “international groups” were involved with the Easter Sunday bombings in Sri Lanka that killed nearly 300 people. The statement did not provide more details about the groups.

Spain’s foreign ministry says a Spanish man and woman were among those killed in a series of bombings in Sri Lanka.

The foreign ministry says in a statement Monday that the Spanish embassy in India is trying to obtain their death certificates. It says that due to privacy laws it cannot provide further information on the two victims.

However, the mayor of Pontecesures in northwest Spain, Juan Manuel Vidal, tells Radio Galega he knew the local pair and says they were in their 30s. That is according to a report by Spanish news agency Europa Press.

No further details were immediately available.

At least 290 people were killed in a series of nine bombings of churches and hotels in Sri Lanka on Easter Sunday.

An American man who was excited to be in Sri Lanka for his job with an international education company was among those killed in the Easter blasts.

Dieter Kowalski’s family in Madison, Wisconsin, was notified of his death Sunday. His mother, Inge (IN’-gah) Kowalski, told The Associated Press on Monday that she’s working with the embassy to bring her son’s body back to the United States. She says the family’s in shock.

Kowalski lived in Denver and was a senior leader of the operational technical services team for the company Pearson. CEO John Fallon said in a message on LinkedIn that Kowalski had just arrived at his hotel when he was killed in an explosion.

Fallon said Kowalski was big-hearted and known for jumping in on challenging problems.

The president of the United Nations General Assembly has expressed “sorrow and solidarity” after the Easter Sunday bombings in Sri Lanka.

Maria Fernanda Espinosa Garcés paused to offer her condolences as the assembly opened a meeting Monday at U.N. headquarters in New York.

She strongly condemned Sunday’s attacks on churches and hotels in Sri Lanka.

Sri Lanka’s U.N. ambassador is cautioning Sri Lankans overseas “to use social media responsibly” in the wake of the Easter Sunday bombings in their country.

The ambassador says the government is temporarily blocking sites “to prevent speculative and mischievous attempts to spread rumors until investigations are concluded.”

He urged expatriates to use social platforms to support one another but to “prevent inadvertently spread panic and mistrust.”

At least 290 people died and 500 were injured in nine bomb blasts Sunday in churches and hotels. Sri Lankan officials attributed the main attacks to seven suicide bombers from a local militant Muslim group.

A total of nine bombings on Easter Sunday killed at least 290 people and wounded about 500 more.

Trump pledged United States support to Sri Lanka in bringing the perpetrators to justice, and the leaders re-affirmed their commitment to the fight against global terrorism.