INDIANAPOLIS (AP) — The FBI said Tuesday it’s investigating the reported assault of a Black man by a group of white men at a southern Indiana lake.

Vauhxx Booker, a civil rights activist and member of the Monroe County Human Rights Commission, said the men pinned him against a tree, shouted racial slurs and one of them threatened to “get a noose” at Monroe Lake near Bloomington over the Fourth of July weekend.

Much of the assault was captured on cellphone video by Booker’s acquaintances.

“The FBI is investigating. We have no further comment,” spokeswoman Chris Bavender said.

Booker’s attorney, Katherine Liell, said the FBI was questioning witnesses and that charging decisions could be made soon.

“We want this investigated as a hate crime. It was clearly racially motivated,” Liell said. “We will continue our quest every day until some justice is served.”

“I’m sad that this happened, honestly,” Booker said. “I just wanted to have a good time with some friends.” 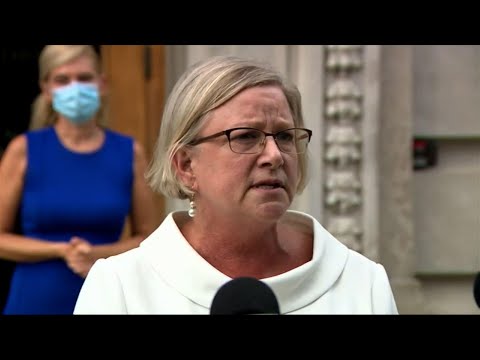 Liell also complained that law enforcement officers with the Indiana Department of Natural Resources “did not move rapidly enough” in response to reports of the attack. She said their failure to make arrests at the scene warrants further investigation from other law enforcement agencies.

Bloomington Mayor John Hamilton said at the news conference that police continue to search for two people accused of knocking a woman unconscious and dragging a man with their car at a protest over the assault on Booker.

Police Capt. Ryan Pedigo told The Associated Press that the confrontation happened near the Monroe County courthouse in Bloomington on Monday evening.

A male passenger got out of a red Toyota car and went to move an electric scooter that had been left in the road near the protest site, Pedigo said. A 29-year-old woman approached the car and placed her hands on the hood, he said.

The driver accelerated into the woman, launching her onto the hood. A 35-year-old man then grabbed the driver’s side of the car and held on as the vehicle continued to accelerate. Both were eventually flung to the ground and the car fled the scene, Pedigo said.

The woman was knocked unconscious and suffered a cut to her head, while the man scraped his arm. She was transported by ambulance to a hospital but her injuries are not believed to be life-threatening, Pedigo said. Authorities have not released the identities of the injured nor said if they were participating in the protest.

The red Toyota has not been located and investigators are still trying to determine the identities and location of the male passenger and female driver, police said in a news release.

“The event last evening is being actively and aggressively investigated right now,” Hamilton said. “We are taking whatever steps it takes to bring justice to that event.”

The protesters had gathered in Bloomington, about 50 miles (80 kilometers) southwest of Indianapolis, to demand arrests in the assault on Booker.

Casey Smith is a corps member for the Associated Press/Report for America Statehouse News Initiative. Report for America is a nonprofit national service program that places journalists in local newsrooms to report on undercovered issues.