When the Chicago Marathon was canceled due to coronavirus, Sister Stephanie Baliga decided to put on her sneakers and run the standard 26.2 miles — in her convent’s basement.

It started as a promise. Baliga had told her running team that in the event of a cancellation, she’d run a treadmill marathon to raise money for the Mission of Our Lady of the Angels food pantry in Chicago. She planned to do it alone, starting at 4 a.m., to music from a boom box.

And so her Aug. 23 run was livestreamed on Zoom and posted on YouTube. That day, the 32-year-old nun wore a U.S. flag bandanna and ran next to statues of St. Francis Assisi and the Virgin Mary.

The loud crowds of the Chicago Marathon, which she ran the last nine years, were missing. But she still got the smiles of high school and college friends, clergy and family members who popped up on a screen and cheered her on.

“It seems to have allowed people to have some encouragement and happiness and joy in this time of extreme difficulty for lots of people,” Baliga said. “I’m really humbled by the extraordinary support that so many people have shown me along this journey.” 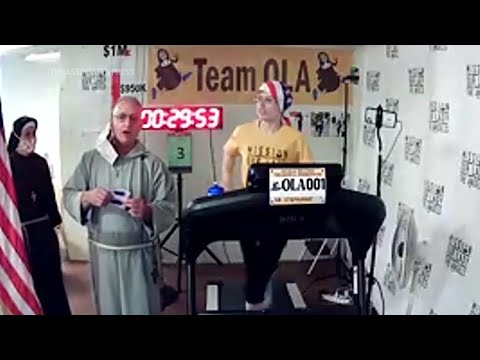 “This is nothing compared to what so many people have been through during this pandemic,” she said.

The last 30 minutes, though, were grueling.

“I was praying that I could make it and not fall off and just survive,” she said.

The final push came from a surprise on-screen appearance by Deena Kastor, the 2004 Olympic bronze medalist. “She’s like my childhood hero, so that was super cool,” Baliga said. “That distracted me from the pain.”

“The only reason I was able to do it was because no one had ever done it before,” she said, smiling.

More importantly, so far her treadmill marathon has raised more than $130,000 for her mission’s community outreach.

Baliga, who began to run at the age of 9, previously competed on the Division I cross-country and track teams at the University of Illinois, where she studied economics and geography. She said her life changed after a powerful prayer experience and she felt the calling to become a nun.

But Baliga kept running. After she joined the order of the Franciscans of the Eucharist of Chicago, she launched the Our Lady of Angels running team to raise funds for the poor.

“All of us play this really important role. All of our actions are connected,” she said. “It’s so important, especially right now, when a lot of people feel isolated and far away, that people continue to sacrifice for each other and to be kind.”

While nonstop news about the effects of the coronavirus has become commonplace, so, too, have tales of kindness. “One Good Thing” is a series of AP stories focusing on glimmers of joy and benevolence in a dark time. Read the series here: https://apnews.com/OneGoodThing