NASHVILLE, Tenn. (AP) — Country stars Dierks Bentley and Tim McGraw are playing free concerts in Nashville during the NFL Draft, but the hundreds of musicians working in honky tonk clubs just blocks from the draft stage want football fans to remember to tip the band.

With turnout expected for each day to reach 100,000 people for the outdoor draft starting Thursday and running through Saturday, the bars on lower Broadway will have plenty of cold beer and live music for visitors.

But many of the musicians say as the city grows, the working musicians who put Nashville on the map are getting squeezed financially. Most venues pay musicians like other service staff, which means a low base pay, which they have to supplement with tips or selling some CDs.

As construction downtown increases, parking fees go up and most musicians have to carry their gear (guitars, drums, amps, etc.) through crowds and traffic to the venues, especially when streets are closed to allow for foot traffic. Those challenges escalate during a special event like the draft.

On Tuesday, the mid-afternoon shift change for musicians coincided with the construction of banners, lights, security cameras, television screens and temporary studios for live television crews covering the draft. Musicians loaded down with gear were weaving through closed streets, barriers and selfie-snapping tourists. 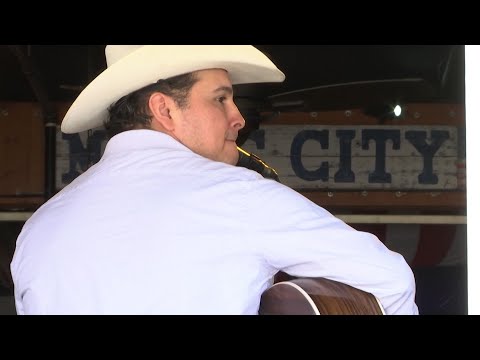 “The musicians are the bedrock of this lower Broadway scene,” said Dave Pomeroy, president of the Nashville Musicians Association, AFM Local 257. “Unfortunately they are consistently at the bottom of the food chain and have a lot of challenges.”

Pomeroy said his union has been trying to work with the city to deal with the logistical complications the draft has brought to those working downtown. They’ve made placards for musicians’ cars so they hopefully won’t be towed while temporarily dropping off equipment. Some parking garages offer discounts to musicians, but they still have to fight the influx of visitors to even find available spots.

Andrew Lipow, a guitarist and songwriter and singer, has been playing bars on Broadway for about five years and said that because most of the bars downtown don’t charge a cover fee to get in, they’re reliant on the generosity of people who have stopped in for some shade, or a beer and listen to their favorite songs.

“We want people to know that when they come to Nashville, it is common courtesy to tip the band,” Lipow said.

Haley Stevens and Julia Kate Snow perform together as the duo Sweet Leah and they said during the summer months, they can make $1,000 to $1,500 each with generous tippers. Sometimes they aren’t that lucky.

The two of them are playing double shifts during the NFL draft, which comes to about eight hours of singing and playing each day. During breaks, they have to work the crowd with a tip jar.

Even the stars that are headlining the nightly draft concerts had to start their careers on Broadway. Grammy-winning singer McGraw, who is playing Friday night’s big stage, said he paid his dues playing the downtown clubs alongside other artists like Kenny Chesney and Tracey Lawrence.

“I played every one of them,” McGraw said. “That’s how I paid my rent.”

For Lipow, he said the city needs to balance the growth and big tourism events and meeting the needs of the musicians that fill the downtown with music or else the musicians are going to find somewhere else to play.

“They come to see musicians play and not just any musicians, really, the best musicians in the country,” Lipnow said.

An earlier version of this report had incorrect spellings for Haley Stevens and Julia Kate Snow’s names.