FORT WORTH, Texas (AP) — The Latest on the fatal police shooting of a black woman inside her own home in Fort Worth (all times local):

A $200,000 bond has been set for a white former police officer jailed in the fatal shooting of a black woman inside the woman’s Fort Worth home.

Aaron Dean was booked Monday evening into the Tarrant County Jail on the murder charge in the death of Atatiana Jefferson.

Jail records do not list an attorney for Dean.

The attorney for the family of a black woman shot and killed in her Fort Worth home by a white police officer says they are “relieved” that the now-former officer has been jailed on a murder charge.

S. Lee Merritt represents the family of Atatiana Jefferson, who police say was fatally shot on Saturday by Officer Aaron Dean. Merritt says the family “needs to see this through to a vigorous prosecution and appropriate sentencing.” He adds that “the city of Fort Worth has much work to do to reform a brutal culture of policing.”

Dean, who resigned from the Fort Worth Police Department before he could be fired, was booked Monday night into the Tarrant County Jail.

A white former Fort Worth police officer has been booked in jail on a murder charge for the shooting of a black woman through a window in her home. 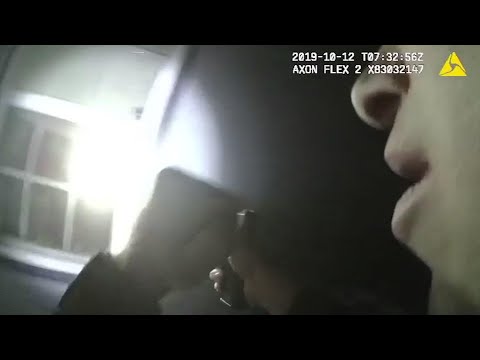 Aaron Dean was booked Monday afternoon. He also resigned from the police department, and the chief said he would have been fired if he didn’t quit.

Atatiana Jefferson was shot to death Saturday by Dean, who was responding to a report of an open door. Interim Police Chief Ed Kraus said Monday that there’s no indication the officers knocked on the front door, and that Jefferson died from a gunshot fired through a window accessible from the fenced-in back yard.

A white police officer in Fort Worth who authorities say fatally shot a black woman in her home resigned in a one-sentence letter Monday.

Aaron Dean’s letter said: “Effective immediately I am tendering my resignation from the Fort Worth Police Department.” The letter was released by the state’s largest police union, the Combined Law Enforcement Associations of Texas.

The group’s executive director, Charley Wilkison, says Dean has not yet hired an attorney but that one will be provided with financial support from the union.

Fort Worth police say Dean shot Atatiana Jefferson while responding to a report of an open door at her home.

Fort Worth’s interim police chief says the department should not have released photos of a handgun found inside the home of a black woman who was killed by a white police officer, noting that many Texas homeowners keep firearms nearby for self-protection.

Atatiana Jefferson was shot to death Saturday by a Fort Worth officer who was responding to a report of an open door. Interim Police Chief Ed Kraus said Monday that there’s no indication the officers knocked on the front door, and that Jefferson died from a gunshot fired through a window accessible from the fenced-in back yard.

Kraus said police have previously released images of weapons to illustrate a perceived threat. But, he said, releasing the photos in this instance was “a bad thing to do.”

Fort Worth’s interim police chief says he expects a “substantial update” by Tuesday on whether a former police officer will be criminally charged in the shooting death of a black woman inside her home.

Interim Chief Ed Kraus said Monday that Officer Aaron Dean would have been fired had he not resigned following Saturday’s shooting death of 28-year-old Atatiana Jefferson.

Fort Worth Mayor Betsy Price called for “justice and closure” for Jefferson’s family.

Officers had responded to Jefferson’s home on a neighbor’s report of an open door. An attorney for Jefferson’s family says she was playing video games with her 8-year-old nephew when a shot was fired into her window, killing her.

Kraus said Monday that there’s no sign that officers knocked on the front door and that the shot was fired from within the fenced-off backyard.

The Fort Worth police chief says a white officer accused in the fatal shooting of a black woman in her home has resigned.

Interim Chief Ed Kraus said Monday that if the officer, Aaron Dean, had not resigned, he would have been fired.

Dean shot 28-year-old Atatiana Jefferson through her window in the early hours of Saturday morning. Officers were called to her home when a concerned neighbor worried for her safety noticed her door was open.

Police have said the officer perceived a threat when he saw someone near the window and opened fire.

Earlier Monday, family lawyer Lee Merritt called for the officer to be fired and charged in Jefferson’s killing.

Family members of a black Texas woman who was shot to death inside her home by a white police officer are calling for an independent investigation of her killing as well as the arrest and prosecution of the officer involved.

Relatives of 28-year-old Atatiana Jefferson said Monday that an agency other than the Fort Worth Police Department should investigate the shooting death of Jefferson, which occurred early Saturday.

Fort Worth police have not yet identified the officer who fatally shot Jefferson but planned a press conference for later Monday.

One of Jefferson’s sisters, Ashley Carr, said her sister was “a smart, ambitious, kind person with a nurturing spirit.” She said her sister had a bachelor’s degree in biology from Xavier University and that her coworkers saw her as a person of integrity.

Carr said Jefferson’s life was marked by honor, integrity, commitment and service, and she called on Fort Worth police to show those same attributes.

Bouquets of flowers and stuffed animals are piling up outside the Fort Worth home where a 28-year-old black woman was shot to death by a white police officer.

Members of the community have brought tributes to the home where Atatiana Jefferson was killed early Saturday by an officer who was responding to a neighbor’s report of an open door. On Monday morning, a dozen bouquets lay near the door and walkway of the home, which is next door to a mosque.

Andre McEwing says he grew up in the neighborhood but now lives in Crowley. He brought two bouquets of roses to the home Sunday but returned Monday to the site, saying the neighborhood “just has questions.”

In the fenced-in backyard, one bullet hole is visible in a window of the single-story, freshly painted purple home. Fort Worth police say the officer fired one shot into home, killing Jefferson.

A white police officer who fatally shot a 28-year-old black woman inside her Texas home is set to be interviewed by investigators as questions and outrage grow over the shooting.

Fort Worth police say officers responded early Saturday after a neighbor called a non-emergency line to report the home’s front door had been left open. The responding officer fired a shot through the home’s window, killing Atatiana Jefferson.

A family attorney, Lee Merritt, says Jefferson was playing video games with her 8-year-old nephew when she was killed. Jefferson graduated with a biology degree from Xavier University in New Orleans.

A vigil took place Sunday outside Jefferson’s home. The officer is expected to be interviewed Monday.

The Fort Worth Police Officers Association issued a statement Sunday calling for “a thorough and transparent investigation” into the shooting.