Melania Trump unveils steps to make ‘Be Best’ even best-er

New steps in the first lady’s second-year push include broadening the program’s focus on drug abuse and social media use, along with her second international trip to promote its goals. She withheld the destination, however, saying the “details are still coming together.”

Mrs. Trump launched “Be Best” a year ago to focus on child well-being, social media use and drug abuse.

She said she has spent the time since listening to and learning from parents, medical professionals, teachers, leaders in the fields of technology and social media and many others, and declared that she is ready for more of that give and take. In a short video that played on monitors in the Rose Garden before she emerged from the Oval Office to kick things off, the first lady said many children have written her to express concerns about drug abuse and online safety.

“I’m ready for all of the work that is still to be done,” she said in the video.

She also invoked her twin roles as first lady and mother of a 13-year-old. She did not mention her son, Barron, on Tuesday, but has said in the past that she has conversations with him about the harm caused by drug abuse and addiction. 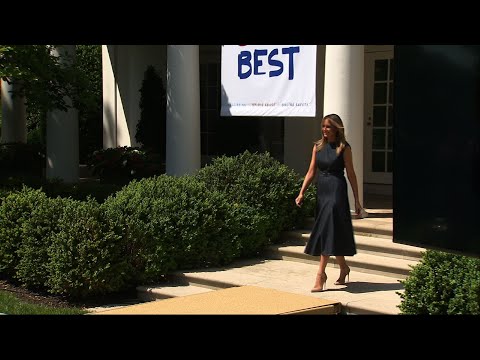 Mrs. Trump celebrated “Be Best’s” anniversary in the sun-splashed Rose Garden, the same place where she launched the initiative in May 2018. President Donald Trump watched from a front-row seat and left the spotlight to his wife. He did not speak. Guests included Cabinet secretaries who support the initiative, White House officials, representatives of social media companies and others.

Mrs. Trump said she has broadened the program’s focus on drug abuse to include children of all ages, instead of just babies born dependent on opioids and other addictive substances, and their mothers. The social media aspect will be expanded to add online safety to the emphasis on bullying and good citizenship online.

In the past year, the first lady promoted “Be Best” in 15 states and nine countries, including during a weeklong Africa tour last fall. She has visited hospitals and schools, participated in children’s events, participated in 18 round-tables and policy briefings and met with more than 30 foreign officials, she said.

She said the U.S. Agency for International Development, which partnered with her on last October’s stops in Ghana, Malawi, Kenya and Egypt, appointed a “Be Best” ambassador in March, and she called on federal government agencies that collaborate with her to follow suit.

“My hope is that together we can be the best at helping children and families find effective ways to educate themselves and become part of the solution to so many problems and issues,” the first lady said.

Stephen Balkam, founder and chief executive officer of the Family Online Safety Institute, applauded the first lady’s shift to focus on online safety, calling it a “smart move” that could draw attention to a larger set of issues, ranging from the amount of time children spend in front of screens to “sexting.”

Myra Gutin, who studies first ladies at Rider University in New Jersey, said Mrs. Trump’s announcements appeared to be logical next steps. She compared it to the focus on literacy by former first lady Barbara Bush.

“How are you going to argue it’s bad to read? The same thing applies here,” Gutin said. “Who would argue that you shouldn’t pay more attention to online safety? They just seem like natural steps to me, in both cases.”