CENTER LINE, Mich. (AP) — Democratic presidential candidate Beto O’Rourke boasted Monday that the more than $6 million he raised online within a day of announcing his White House bid, the most reported by any 2020 candidate, was helping to create “the largest grassroots campaign this country has ever seen.”

The “record-breaking” $6.1 million collected last week came “without a dime” from political action committees, corporations or special interests, O’Rourke spokesman Chris Evans tweeted. The figure is just above what Vermont Sen. Bernie Sanders reported for his first day as a 2020 candidate.

O’Rourke, a former Texas congressman, jumped into the presidential race on Thursday after months of speculation, shaking up the already packed Democratic field and pledging to win over voters from across the political spectrum.

“Thank you to everyone who’s helping to build the largest grassroots campaign this country has ever seen, funded completely by people — not PACs, not lobbyists, not corporations and not special interests,” O’Rourke told reporters in Center Line, a Detroit suburb. “It’s one of the best ways to bring the country together to make sure that we are listening to one another and not that entrenchment of wealth and power and privilege that defines so much of our politics from before.” 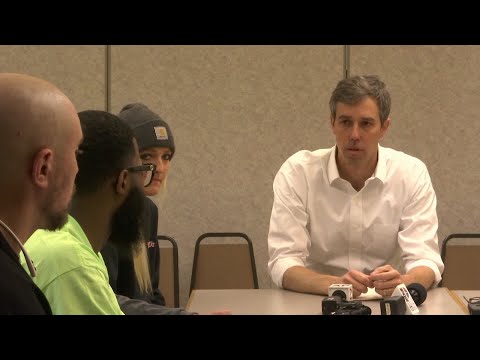 O’Rourke raised an eye-popping $80 million in grassroots donations last year in his failed U.S. Senate race in Texas against incumbent Republican Ted Cruz, all while largely avoiding money from PACs. His early fundraising numbers in the presidential contest will be seen as an initial signal of whether his popularity during the Senate campaign will carry over to his White House bid.

He said Monday he didn’t know the average donation to his presidential campaign, but added without providing evidence, “I just know that people contributed from every state in the union.”

Washington Gov. Jay Inslee said three days after starting his presidential campaign this month that he had raised more than $1 million, a notable haul for a governor less widely known than many of his competitors in a field dominated by senators. And former Colorado Gov. John Hickenlooper said he reached $1 million within 48 hours of announcing his White House bid at the beginning of this month.

Sanders has set the pace for 2020 grassroots donations. Aided by the $6 million he pulled in on his first day as a candidate, he took in more than $10 million in the first week, overwhelmingly from small donors.

O’Rourke, asked last week if he thought he would top Sanders, said only, “We’ll see.”