The Latest: UN will press global community for cyclone aid

JOHANNESBURG (AP) — The Latest on Cyclone Idai and the flooding damage to Mozambique, Zimbabwe and Malawi (all times local):

United Nations deputy spokesman Farhan Haq says the U.N. will ask the international community for money to help victims of Cyclone Idai but “at this stage what we want to do is underscore the sheer level of this crisis.”

He told reporters that “this may be one of the worst natural disasters to hit southern Africa in living memory.” The cyclone roared ashore overnight into Friday and flood waters are still rising amid torrential rains.

Haq says the scale of devastation in Mozambique, Zimbabwe and Malawi is not yet known but the amount of money requested “will be large.”

Zimbabwe’s president says that “we do not want to hear that anyone has died of hunger” as aid is rushed to remote areas hit hard by a tropical cyclone.

President Emmerson Mnangagwa spoke during a visit to eastern Zimbabwe as the country’s death toll rose above 100 and burials continued.

The president of neighboring Mozambique has said more than 200 people are confirmed dead there after the cyclone roared in over the weekend.

Zimbabwe’s military is using helicopters to deliver aid to mountainous areas where roads and bridges have been washed away. Survivors say whole towns have disappeared. 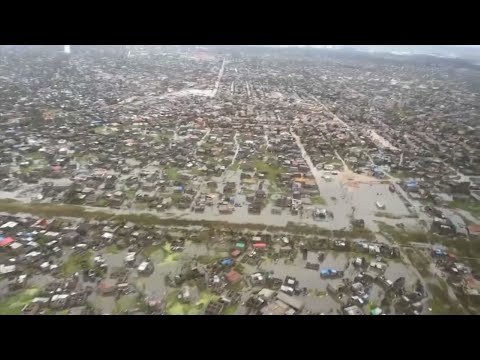 Pope Francis is praying for victims of the cyclone-induced flooding in southern Africa and is urging support for those affected.

Francis issued an appeal at the end of his weekly general audience Wednesday for those affected by the flooding in Mozambique, Zimbabwe and Malawi that have killed more than 350 people.

Francis said: “I express my pain and closeness to those dear people. I entrust the many victims and their families to the mercy of God and urge comfort and support for those who have been struck by this calamity.”

Aid workers are rushing to rescue victims from treetops after the cyclone unleashed the devastating floods.

Mozambique Telecom says some mobile phone service has been restored in the city of Beira after a tropical cyclone knocked out communications over the weekend.

The company says in a social media post on Wednesday that efforts continue to restore communications to other affected areas in central Mozambique.

Beira is a city of some 500,000 people and much of it has been destroyed. It is the staging area for frantic rescue efforts throughout the badly flooded region.

India’s government says three naval ships have been diverted to Mozambique’s port city of Beira after much of the city of 500,000 was destroyed by a tropical cyclone.

A statement says the ships changed course after a request from Mozambique’s government and are providing humanitarian assistance that includes the evacuation of people stranded by rising flood waters. A helicopter from one ship also is operating.

The Indian statement also says the naval ships are expected to set up medical camps and provide food and other badly needed supplies.

More humanitarian aid is being pledged for the three southern African countries badly hit by a tropical cyclone that has killed hundreds of people.

The Emirates News Agency cites the Emirates Red Crescent as saying that the United Arab Emirates will provide 18.3 million dirhams ($4.9 million) to Mozambique, Zimbabwe and Malawi.

Zimbabwe’s President Emmerson Mnangagwa told survivors that a planeload of aid from the UAE is expected to arrive in the capital, Harare, later Wednesday.

And the chairman of the African Union Commission says the continental body will provide $350,000 in immediate support to the countries.

Zimbabwe is retrieving and burying bodies Wednesday as Mozambique begins three days of national mourning for victims of Cyclone Idai.

The death toll is rising in both countries, but the full number of those killed and damage done will only be known when torrential floodwaters recede. Persistent rains are forecast through Thursday so it will be days before the plains of Mozambique drain toward the Indian Ocean.

Zimbabwe President Emmerson Mnangagwa is to visit on Wednesday the hard-hit mountain community of Chimanimani on the eastern border with Mozambique. Some 300 people may have died in Zimbabwe as a result of the cyclone, say officials.

Mozambican officials say its death toll is 200 and rising. Mozambican President Filipe Nyusi said earlier this week he expects fatalities to be more than 1,000.