LONDON (AP) — Drones buzzing over the runway forced the shutdown of London’s Gatwick Airport on Thursday during one of the busiest times of the year, stranding or delaying tens of thousands of Christmas-season travelers and setting off a hunt for the operator of the intruding aircraft.

The prospect of a deadly collision between what police described as industrial-grade drones and an airliner led authorities to stop all flights in and out.

Police said they had no doubt the intrusion was a deliberate attempt to disrupt operations at the airport during a peak period, but there were “absolutely no indications to suggest this is terror-related.”

About 20 police units from two forces tried to zero in on the drone operator after the first sighting over Gatwick on Wednesday evening. Police told airport officials it was too risky to try to shoot down the two drones — stray bullets might kill someone.

“Each time we believe we get close to the operator, the drone disappears. When we look to reopen the airfield, the drone reappears,” said Sussex Police Superintendent Justin Burtenshaw. He said the newer-generation drones are bigger and have more range, making it harder for police to locate the person controlling the device. 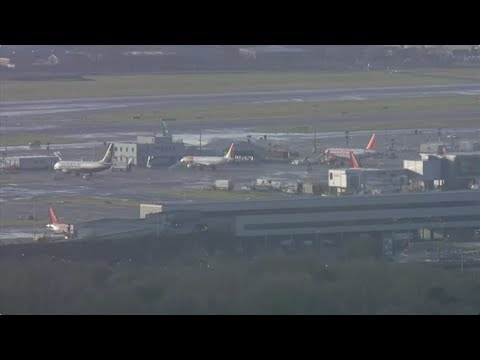 Defense Secretary Gavin Williamson said the military would be deployed to help police. He said the armed forces would bring “unique capabilities” but gave no details.

With drones booming in popularity and becoming increasingly affordable, aviation authorities have been warning in recent years about the risk of a catastrophic collision with an airliner, and Britain — and the U.S. — have tightened restrictions. Drones could get sucked into a jet engine or crash through a windshield, incapacitating the pilot.

The crisis at Gatwick had a ripple effect on air travel in Britain, continental Europe and beyond as incoming flights were sent to other locations and outgoing ones were grounded. British authorities said they would lift some night-flight noise restrictions at other airports to ease the congestion.

Travelers described freezing conditions overnight at Gatwick as hundreds slept on benches and floors, and passengers and their families complained they weren’t being kept informed about re-routed flights.

“We understand it’s an emergency situation, but the lack of information is really surprising,” said Vanessa Avila, an American based in Britain who works for the U.S. military. Her mother was on a flight from Florida to Gatwick that ended up landing in the northern English city of Manchester.

Gatwick — Britain’s second-busiest airport by passenger numbers — first closed its runway Wednesday evening after the drones were spotted. It reopened briefly at about 3 a.m. Thursday but shut down 45 minutes later after further sightings.

The airport, about 30 miles (45 kilometers) south of London, sees more than 43 million passengers a year. About 110,000 had been scheduled to pass through on Thursday.

Police said the drones were of an “industrial specification,” an indication they weren’t the small, inexpensive machines sold to hobbyists. The larger drones are more dangerous to jets in flight and can stay in the air longer.

The airport’s terminals were jammed with thousands of weary travelers.

“I haven’t slept since yesterday morning. We are very tired. It’s freezing, we are cold, having to wear all of these coats for extra blankets,” said Andri Kyprianou, of Cyprus, whose flight to Kiev was canceled.

Passengers complained on Twitter that their Gatwick-bound flights had been diverted to London’s Heathrow Airport, Manchester, Birmingham and other cities.

Luke McComiskie, who landed in Manchester, more than 160 miles (260 kilometers) from London, said the situation “was just chaos, and they had only two coaches (buses) and taxis charging people 600 pounds ($760) to get to Gatwick.”

Pilots around the world have reported numerous close calls with drones in recent years. Under British law, flying a drone within 1 kilometer (0.6 miles) of an airport is punishable by up to five years in prison.

Gatwick briefly closed its runway last year when a drone was spotted in the area. A drone also briefly led to the shutdown of Dubai’s international airport in 2016.

Britain’s Guild of Air Traffic Control Officers complained that regulators have repeatedly ignored its calls for tougher measures against drones. It said it has urged the use of “geofencing” — software to stop drones from flying into restricted airspace — and other countermeasures.