Justice Thomas: Judges must uphold law, even when unpopular

ATLANTA (AP) — Judges must resist the temptation to bend their rulings to personal racial, religious or partisan preferences and instead uphold the rule of law, even when that leads to unpopular decisions, U.S. Supreme Court Justice Clarence Thomas said Tuesday.

“Each time a judge sidesteps or manipulates the law to achieve his or her desired outcome, the rule of law suffers and is undermined and, eventually, compromised,” Thomas said in a keynote speech during the dedication of Georgia’s new judicial center in Atlanta.

Thomas is a Georgia native, born in the Pin Point community near Savannah. It wasn’t long ago that courthouses like the one being dedicated Tuesday were segregated, he noted.

Segregation endured, he said, not only because of prejudices and a lack of understanding, but also because of a “lack of courage among those who knew or should have known better, especially in the judicial branch of government.”

Having the courage to uphold the rule of law may lead judges to decisions that aren’t popular at the time, Thomas said.

“Our decisions should not be driven by a desire to be revered or lionized for reaching certain outcomes. We are not mass media icons,” he said. “We are judges, nothing more and nothing less.”

The new Nathan Deal Judicial Center is named after the Georgia governor who served from 2011 to 2019 and pushed through broad reforms to the state’s criminal justice system. 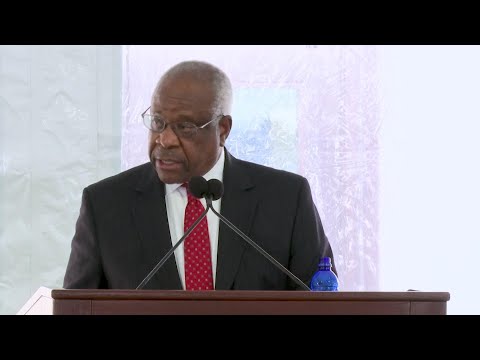 On hand for Tuesday’s dedication, Deal got choked up as he thanked all the people who helped make the building possible.

The new judicial center houses the state’s two appellate courts — the Georgia Supreme Court and the Georgia Court of appeals. It is also slated to be home to the new statewide business court.